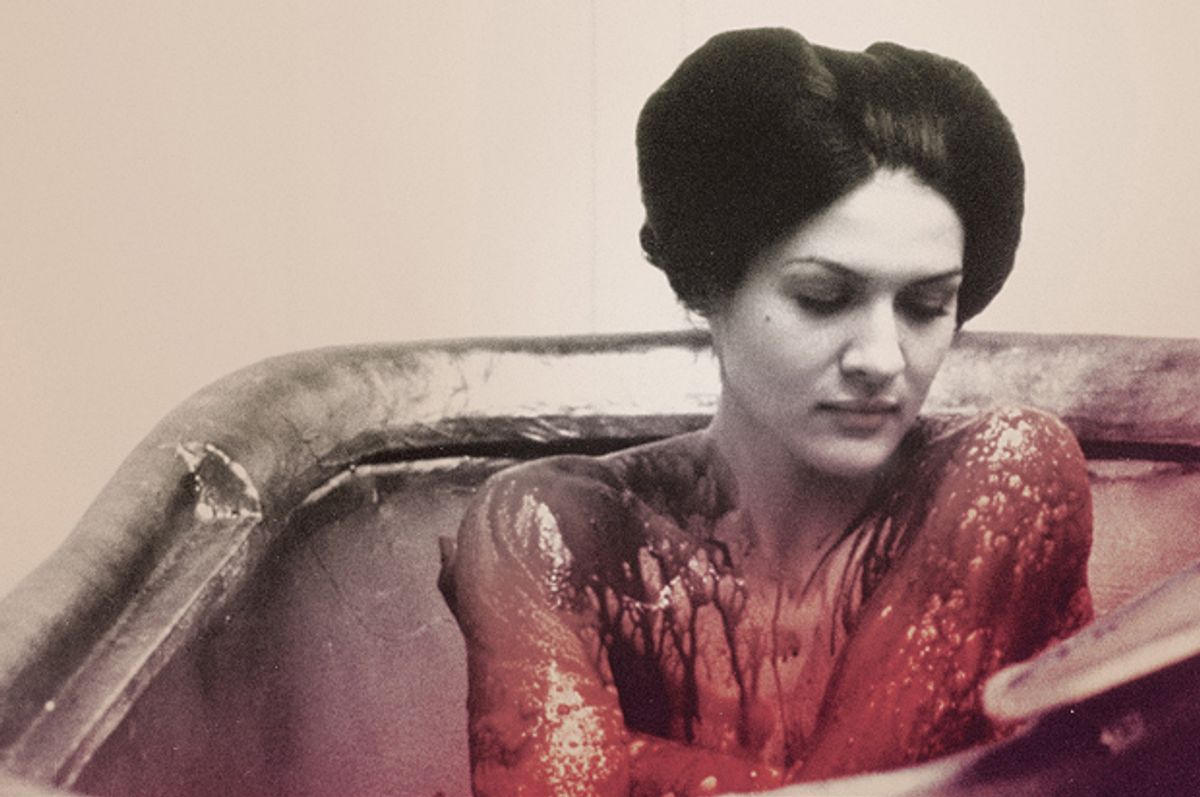 Alas, we are prisoners of our animal nature and cannot escape the enslavement of passion, says an elderly village curate to a local aristocrat in Polish-born director Walerian Borowczyk’s deeply weird Gothic-erotic-farcical fable “The Beast,” a film made in France in 1975. (It’s an adaptation of the same material that fueled Jean Cocteau’s “Beauty and the Beast,” and for that matter the Disney version too.) The old priest ought to know; he travels everywhere with two beautiful adolescent boys who do not seem strictly necessary to his clerical duties. Fortunately, responds the duke – who is trying to get his surly but shy adult son married off to a visiting English heiress – we have the intellect to keep our animal instincts in check and keep us on the straight and narrow path. What the duke doesn’t know is that his daughter is upstairs in bed with the black valet, and that the English heiress is spending some alone time with her Polaroid snapshots of the duke’s prize stallion’s impressive endowment.

If the debauched clergyman is not much impressed by the duke’s faith in reason, neither is Borowczyk, a long-forgotten filmmaker who may qualify as the cinematic rediscovery of 2014. Watching “The Beast” and its immediate precursor, the anthology film “Immoral Tales” – both being re-released this month in new digital restorations by IFC Midnight, with theatrical runs in New York and nationwide VOD – makes clear that Borowczyk belonged, or should have belonged to the same international cinematic avant-garde that also included Luis Buñuel, Alejandro Jodorowsky, Jacques Rivette and Nicolas Roeg. For reasons that don’t seem obvious in retrospect, he was branded as a pornographer and they weren’t. Sure, there’s plenty of sex and nudity in Borowczyk’s work, to go with a prurient fascination with female desire. But that hardly makes him distinctive in the male-dominated history of cinema and art, and by the standards of 21st-century European film his smut level is pretty mild (and nowhere near contemporary porn).

If Borowczyk’s view of female sexuality is wedded to the “male gaze,” and shaped by stereotypes about the holy innocent and the devious predator, his moral philosophy is highly complicated (drawn most directly from La Rochefoucauld, Voltaire and the Marquis de Sade, but also from Nietzsche and Freud) and his images are often arresting, exquisite and witty. The women in his sexual tableaux have real bodies, with body hair and everything, and for the record he has no aversion to male nudity either. (And then there’s that stallion’s star appearance in the opening scene of “The Beast,” putting the entire human male gender to shame.) But I’m not here to argue for the redeeming virtues of a filmmaker who deliberately set himself up as a puckish sexual contrarian (and who is well worth a feminist re-reading), only to observe that what befell him was unfair and that his films are full of unexpected delight and unsettling power.

What we see in “Immoral Tales,” and even more so in “The Beast,” is a master of color, montage and ironic juxtaposition, who shoots the human form and the natural landscape with grace and feeling. If Borowczyk has a distinctive vision, it lies in that connection: We belong to the world of nature, we are animals driven by desires both conscious and otherwise, and the more we try to cover that up with social convention the worse things get. In the second episode of “Immoral Tales,” he cuts away from a possible rape scene to show us a cow, chewing her cud in a nearby field. What these humans do, for good or ill, is of no concern to her. In the first episode, a young man takes his beautiful younger cousin to the beach and persuades or coerces her into performing oral sex, but while it’s happening the camera moves away to swallows nesting on the cliff face, and seabirds feeding in the ocean.

Each of the four self-contained narratives in “Immoral Tales” – which apparently caused a scandal at the London Film Festival in 1974 – is an ironic and/or grotesque fable that could indeed be read as expressing feminist or proto-feminist sympathies, in the sense that Borowczyk sees female desire as something that must always be coded and concealed within the hypocritical constraints of religion and contemporary morality. This culminates with the horror fable of the infamous Countess Elizabeth Báthory (played by Paloma Picasso, the artist’s daughter), a 17th-century Hungarian noblewoman rumored to have harvested hundreds of young girls for her pseudo-vampiric rituals. But what I remember most vividly about “Immoral Tales” is Borowczyk’s Old Master-like obsession with images of natural abundance: Plump chickens, babies’ butts, old women’s faces, cows’ udders and piles of apples – to go along with all the amply-fed unclothed female bodies.

In “The Beast” you can feel Borowczyk trying to push beyond the limitations of his niche and reputation, with mixed results. It’s a far more ambitious work that often hits its satirical target but is less successful as a whole. While it might still qualify as softcore by ‘70s standards, there is no sex at all for the first 40 minutes. (That is, no sex involving human beings.) Acting ranges from indifferent to awful; the woman who plays the English heiress can barely speak the language, except in the moments when her lines are dubbed by an American. Still, it has a flavor all its own: The duke and the priest represent the fading powers of European convention, grimly trying to hang on while sexual liberation undermines them from one side and ancient atavistic legend from another. Their crumbling old chateau is full of dust, infested with snails, furnished with strange pornographic drawings and haunted by a mythical beast the stallion-obsessed English girl both does and does not want to meet.

”The Beast” is now playing at the IFC Center in New York, and “Immoral Tales” opens there this week. Both films are available on-demand from cable, satellite and online providers.