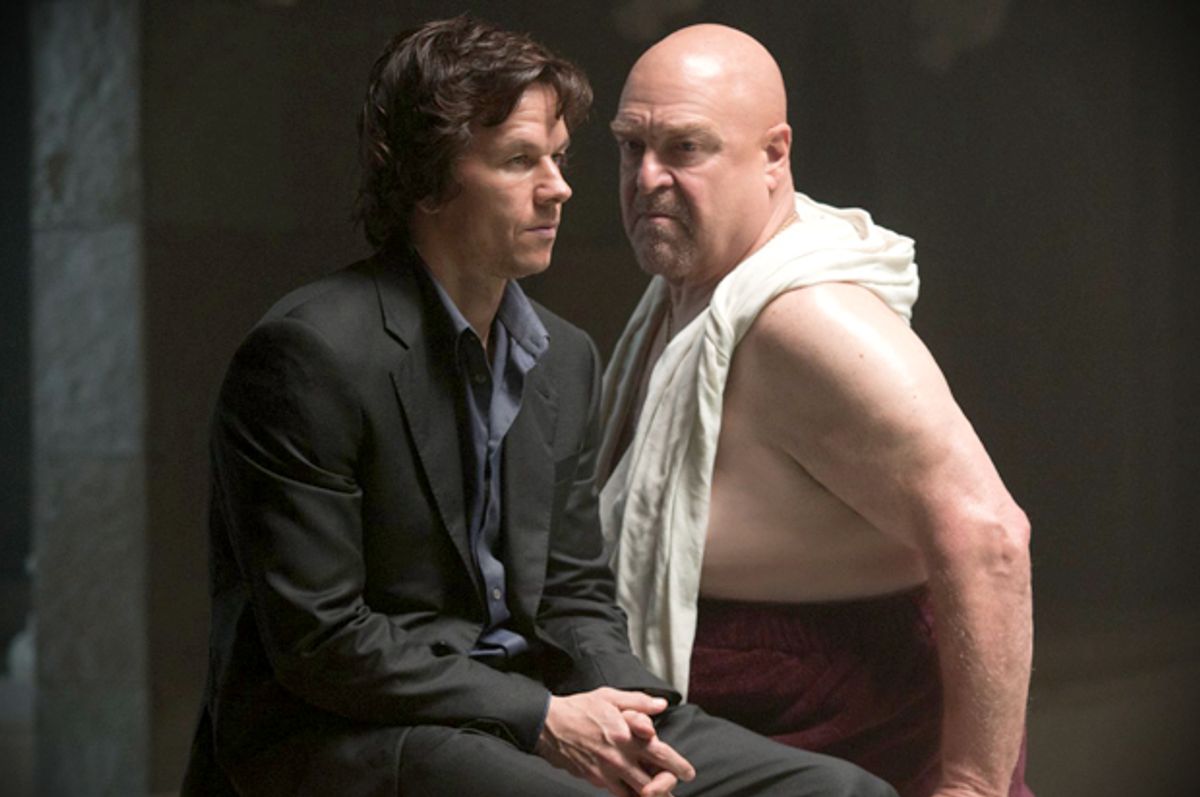 Mark Wahlberg and John Goodman in "The Gambler" (Paramount Pictures)
--

“The Gambler” is an agreeable if ridiculous slice of old-school Hollywood machismo, which will no doubt be widely understood as a harmless holiday-season change of pace, a “genre exercise,” as the critic’s manual puts it. But there’s no such thing as a Hollywood movie without ideology, and the ideology this one expresses is that of a wistful lost masculinity, of reckless but pampered bad boys, charismatic antiheroes who read books and write the stories of their own destruction.

Mark Wahlberg, of all actors, plays a college professor named Jim Bennett, who has a sports car, a shag haircut and a wardrobe of slim-cut blazers, and who gets in way too deep with dangerous gangsters. John Goodman gets to do both his patented bad-guy performance and his patented best-friend performance as the most dangerous of all possible gangsters, who for unclear male-bonding reasons becomes Jim’s guardian angel. “The Gambler” is not by any measure a terrible movie, but it’s an odd one to encounter at the end of a year so dominated by intense and heated discussions of gender politics, a vision of male depravity and decadence that also comes with a wide-eyed, boyish innocence. Maybe that’s not surprising, since this picture is a remake of an almost-iconic one with the same title made in 1974, which starred James Caan and Lauren Hutton, and marked the screenwriting debut of legendary Hollywood bad boy James Toback.

There’s no question that the original “Gambler” is better. It feels rooted in time and place in a way this new version can’t quite manage, and it wasn’t constructed as a vehicle for a movie star’s image makeover. But that’s not to say the peculiar 2014 rebuild, “Gambler,” directed with considerable flair by Rupert Wyatt (“Rise of the Planet of the Apes”), doesn’t offer plenty of color and its own esoteric charms. Casting Wahlberg as a wisecracking, fast-talking intellectual who is as comfortable discussing “Hamlet,” Albert Camus and existentialism as he is plunking down 40 grand on a single blackjack hand certainly required bravado. Whether or not it pays off, the onetime Boston knucklehead is very likable in the part, and does not embarrass himself.

I mean, no, I haven’t seen too many English professors with Jim’s sharp-dressed-man affect (or his high-end BMW), although that might have been vaguely more believable in 1974. Also, I don’t really grasp what area of academic expertise would include teaching a course on Shakespeare and a course that involves Camus – but ditto as to 1974. Given that every aspect of Jim’s persona is projected male fantasy, those are silly objections. He can teach whatever the hell he wants; he’s not a real person. Camus and Hamlet are in there, of course, to underline the idea that Jim has chosen his own road to perdition. He’s a good-looking white guy from a wealthy L.A. family who has had every educational opportunity and every form of privilege, and is expressing his existential freedom by getting repeatedly beaten up by criminals of other races.

When his story begins Jim is already hundreds of thousands in debt to a sinister Asian gambling tycoon, and doubles down on that by borrowing money from an African-American gangster actually called Neville Baraka (Michael Kenneth Williams). He identifies the one undergraduate (Brie Larson) in his orbit with obvious literary talent, and then shamelessly hits on her. He yearns to be broke, fired, beaten to a pulp and killed, in no particular order, or at least to be set free from the oppressive destiny of being himself. Wahlberg brings a guileless, unquenchable spark to the role – “convincing” is really the wrong standard to apply – perhaps because he has no idea how hackneyed and nostalgic this vision of masculine escape is. It’s like Charles Bukowski as retold by Bret Easton Ellis and then summarized in Playboy.

Wyatt is a capable director with a good sense of space, who keeps the train humming from one horizontal California location to the next but leaves time for loquacious, irrelevant side trips in true ’70s Hollywood fashion. (The movie is set now, but might as well not be.) Jessica Lange shows up a couple of times as Jim’s brine-pickled mother, either refusing to bail him out or offering money he will promptly squander. Goodman, an accomplished veteran at rescuing scenes in the most dire of motion pictures, plays a forbidding mountain of flesh, the Lucifer of Jim’s journey into hell, offering him a final choice between redemption and annihilation.

William Monahan’s rewrite of Toback’s original screenplay uneasily bounces off our contemporary sense that gambling addiction is a disease and that somebody like Jim has no control over his behavior – which is pretty much the opposite of what’s conveyed by all that existential hoo-ha. The original Toback-Caan film (directed by Karel Reisz) rested on the idea that everything the main character does is an expression of freedom, and also on a 19th-century romantic conception of gambling as a profound metaphor for Life or Fate or whatever. Now it just seems like a really stupid reason to get into trouble. Some fragments of that Dostoevskian romance linger on here: Just enough so that Wyatt and Wahlberg nail the climactic scene, when Jim is literally playing for his life, and make it momentarily seem to mean something. But not quite enough that you’ll remember what that something might be the next day.