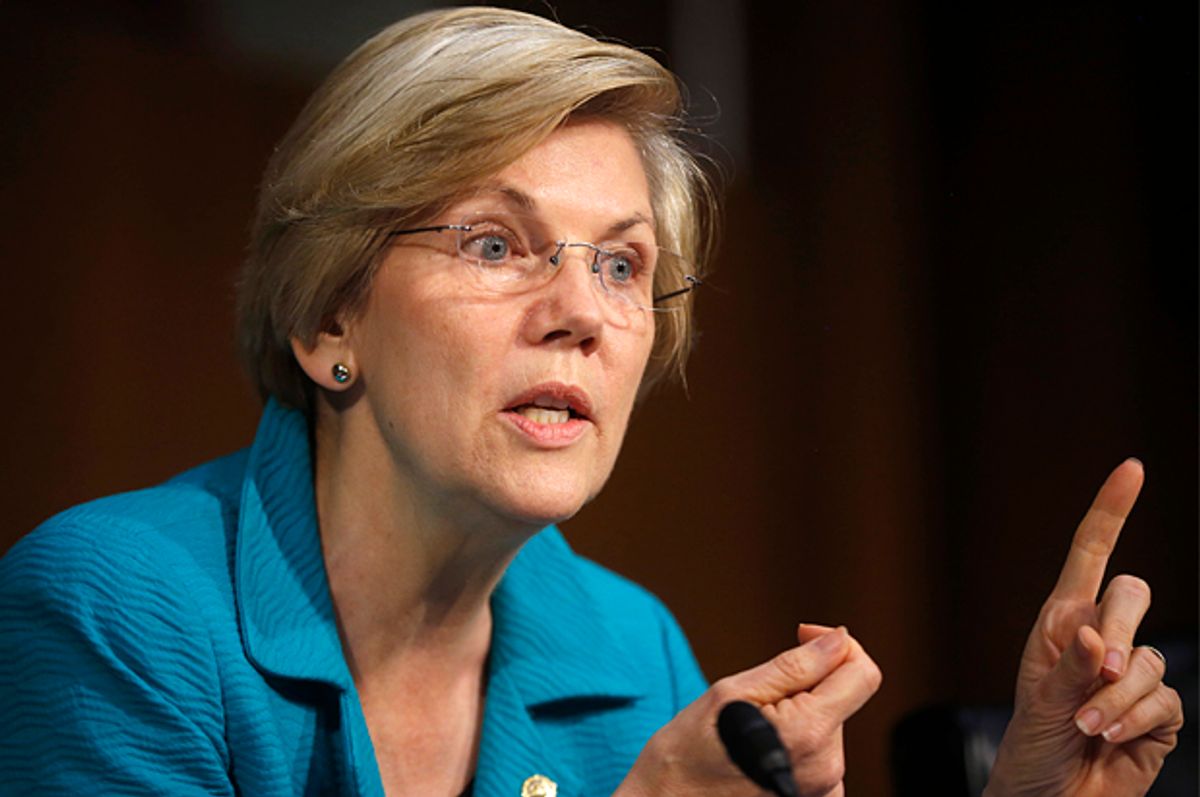 2014 was not a good year for the left. Republicans now have a stranglehold on the House, where they control the most seats they’ve had since 1948. That lead will likely last for decades. Democrats didn’t just lose the Senate, they have significantly diminished their chance of regaining it in 2016. Republicans control 31 governorships, as well as 68 of 98 legislative chambers. And of, course, the Democratic party has shown itself to be only nominally liberal, with the current frontrunner for 2016 raising money from Wall Street financiers. The left then has two problems: how to get Democrats winning and how to get Democrats to avoid becoming a party permanently in the callous hands of capital.

Currently, much of the hope for a more liberal Democratic party rests on the shoulders of Elizabeth Warren, who is being drafted to run against Hillary Clinton. While Warren is formidable, it was only six years ago that the left laid its hopes for victory on a single individual and found itself sorely disappointed. The left must remember that leaders do not make movements; rather, movements make leaders. Instead of vacillating from one hero to another, the left must create a formidable power base from which to both defeat Republicans and shift Democrats to the left. This will require a three-pronged approach: mass mobilization of the non-voting population, a stable of progressive leaders and a reduction in the influence of money in politics.

A recent study by political scientists John Griffin and Brian Newman helps explain why. The authors examine “wins” and “losses” for various groups, that is, how often their member of Congress voted according to their preference. They find that voters win 53.1% of the time, while non-voters only win 48.8% of the time. That should be worrying for the left, since research suggests that non-voters are much more economically liberal than voters. A 2012 Pew Study finds that non-voters were far more likely to support the Affordable Care Act (49% of likely voters supporting repeal, compared to only 31% of non-voters). Non-voters were far more likely to support Obama (47% of likely voters versus 59% of non-voters) and oppose Romney (47% and 24%). Non-voters are more likely than voters to support policies to strengthen unions and to support a job guarantee. How do we boost turnout low-income turnout? We know. Same-day registration is proven to boost turnout and reduce turnout inequality. Felony disenfranchisement laws primarily affect the poor (and people of color). Our two-step elections system (which requires registration) hurts low-income people who are less likely to be registered. To combat this states should better comply with the National Voter Registration Act, which requires public assistance agencies (including the offices enforcing Obamacare) and DMVs to hand out registration forms. The left must also stop the rise of voter ID laws, which disproportionately affect voters of color and low income voters. In the long run, a mandatory voting law would be ideal.

Although voting benefits nearly all groups, Blacks do not gain as much from voting, according to a recent study (cited above) by Griffin and Newman. That is because, as Paul Frymer notes, Democrats often have an incentive to try to court white voters or high income votes to ensure re-election (under the assumption that Blacks won’t run for to the Republican Party). The best way to solve this problem is more people of color in office. Research by Eric Juenke and Robert Preuhs finds that at the state level, people of color are better represented by people of color than white Democrats. Griffin and Newman find much the same thing at the federal level, with some caveats (in some cases, white Democrats are equally effective). Christian Grose finds that Black dedicate more money to African-American constituents. Descriptive representation also leads to more people of color voting, which further strengthens the left.

Also lacking in office is workers. Nicholas Carnes finds that while more than half of all Americans have working class jobs, over the last century workers have never made up more than 2% of representatives at the Congressional level and they make up little more of representatives at the state level. This is important because numerous studies show that wealthy congressmembers tend to vote more in favor of  business interests and tax cuts, while workers are much more liberal, as measured by AFL-CIO scores. The good news is that research suggests that people of color are actually just as likely as white candidates to win: the problem is that they often don’t run. The same is true of workers. Carnes finds that training programs can help prepare workers for a campaign, and workers who completed the New Jersey "“Labor Candidate School,” had a 75% success rate. Party leaders who are crucial to the candidate election process need to cultivate workers, women and people of color to run. Finally, the left needs a stable of wonkish administrators that can offer policy recommendations.

3. Get Money Out of Politics

But candidates don’t run and politicians don’t vote in a vacuum. The last decade has seen an explosion of money in politics and it’s distorting the political process. SuperPACs are flooded the airwaves, corporations are spending nearly unprecedented amounts on lobbying and the system is awash with “dark money” that cannot be traced to a donor. Sheldon and Miriam Adelson spent $91.8 million to influence the 2012 election, more than the combined residents of 12 states. In 1980, the largest contributor, Cecil R. Haden gave only $1.72 million in inflation-adjusted dollars. The richest .01% of the population account for 40% of campaign contributions.

This is worrying, because a vast literature shows that campaign contributions can influence outcomes, that lobbying tilts policy in favor of lobbyists and that individual donors can set the political agenda. The problem is that the rich have very different priorities than the middle class. A pioneering study of the policy preferences of the rich finds that the rich are, “extremely active politically and that they are much more conservative than the American public as a whole with respect to important policies concerning taxation, economic regulation, and especially social welfare programs.” Further, numerous studies find that when preferences collide, the rich win out. Although it seems daunting, there are actually numerous policies that the left could pursue that would halt the rise of money in politics. Lobbying regulations have been shown to increase political equality. Unions, which advocate in the interests of all Americans can provide a bulwark to corporations but political spending from both are treated differently. The scatterplot below shows the five unions included in the analysis are (AFL-CIO, AFSCME, Teamster, UAW and the National Education Association). They also align with the middle class. These disparities can be reconciled through a bill like the DISCLOSE Act or SEC oversight, which would bring corporate political spending out of the dark and into the public spotlight. It’s also important to lay the intellectual and legal groundwork to eventually overturn Citizens United and McCutcheon.

These policies are specifically selected because they have a track-record of success that is empirically proven. They are also policies that can be persuasively presented to voters. Politicians aim to get re-elected and they will do whatever it takes to maintain power. With these policies, politicians will have to win the votes of an increasingly economically liberal electorate. The goal of the left should be to force Democrats to adopt economically liberal policies or fear for their seat.

But a progressive America will require work. While it is easy to crown Obama or Warren savior and wait in anticipation for change, those who do so are waiting for Godot. There have been successes over the last year: the Working Families Party helped re-elect Governor Malloy, a consistent progressive (something possible partially because of public financing. Demos (my organization) has been doggedly ensuring that states comply with Motor Voter and we’ve had victories on Same-Day registration. These wins were difficult, but they compound into more victories down the road. But simply anointing another progressive to lead the movement will only lead to disappointment.