Slaughter and satire: Understanding what Charlie Hebdo really stood for

Yes, the Paris attack was a direct assault on freedom -- and it must not be used as a justification for tyranny 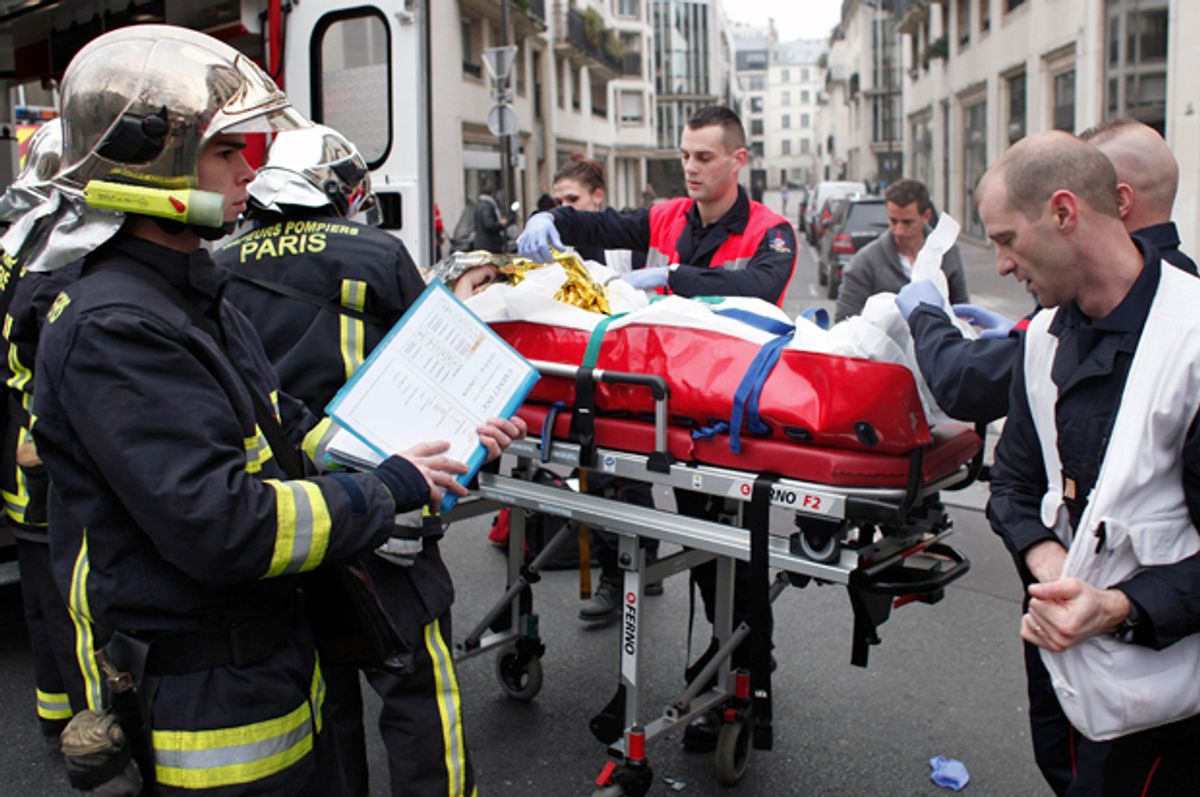 An injured person is carried into an ambulance at the French satirical newspaper Charlie Hebdo's office, in Paris, Jan. 7, 2015. (AP/Thibault Camus)
--

Editors and cartoonists at the ruthlessly satirical and staunchly anti-religious French weekly Charlie Hebdo knew they were inviting the hatred of zealots. They had undoubtedly become accustomed to death threats since publishing a leering cartoon of the Prophet Muhammad on the cover four years ago, and their incoming hate mail must have made the vitriol we receive, as a left-leaning American political publication on the Internet, feel like a garden party from “Downton Abbey.” We assume they did not literally expect to be killed for publishing mean jokes about other people’s religions, although editor-in-chief Stéphane Charbonnier (known as “Charb”) repeatedly told interviewers he would rather die than be silenced. But that’s what it came to on Wednesday morning in Paris, when Charbonnier, at least four Charlie cartoonists, two police officers and five other people were killed in a shocking attack that appears to have been carefully planned and professionally executed.

Like everyone else who writes down (or draws) their opinions for a living, and who values the amazing freedom to attack princes, priests and millionaires with equanimity, I feel profoundly shaken by what happened on Wednesday morning. “Je suis Charlie,” as the hashtag of the moment holds, or better “Nous sommes tous Charlie,” because we have all suffered a grievous loss. The responses from cartoonists and writers all over the world have been inspiring, and to some extent comforting. But it’s important to move beyond hashtags and reflect a bit more deeply about Charlie Hebdo, its editorial mission and its social-political context. You don't have to like Charlie, or agree with its editorial decisions, to appreciate its importance. (Indeed, it's a publication that thrives on being disliked, and on pushing too far.) The way to make the tragic deaths of Charb and his colleagues mean something is to understand what they really stood for, and to think seriously about this attack and how to respond to it.

That is no simple matter, and the shock and grief are still too fresh: I do not claim to possess some fully worked-out understanding. We do not yet know who planned this attack and whether an overseas terrorist organization is involved, although it now appears that the three gunmen who carried it out were French citizens. We have a pretty good idea why they did it, and there's no point in denying that satirical or derogatory depictions of the Prophet touch a frayed nerve in the relationship between democracy and Islam. But Charlie Hebdo is not just some random publication that made fun of Muhammad. It's something closer to a canary in the coal mine of democracy. It’s a dissident, thorn-in-the-side paper that was once closed down by its own government, in the putative homeland of liberty and equality. It’s a paper that has doggedly sought out the outer edge of acceptable expression, a paper devoted to offending anyone and everyone and to scourging those who hold power over others.

Charlie Hebdo belongs to a distinctly French tradition of sharp-fanged humor – directed at the powerful, the smug, the sanctimonious, the intolerant and the bourgeois of all backgrounds and nationalities – that goes back at least as far as Voltaire and the 17th century. Its cartoons and gag lines don’t translate into English particularly well, and there is no precise American parallel. Indeed, I don’t think anything like Charlie Hebdo would be readily tolerated in America, beyond the margins of the far left or far right. Our social contract functions very differently from the atheistic and secular culture of Parisian public discourse, and the American media is generally required to treat even the most ludicrous aspects of religion with hands-off respect. (I’m not honestly sure whether this is good or bad, but if a devout Mormon tried to run for public office in France, he or she would be laughed off the stage.) I suppose the Onion comes the closest to being an American Charlie, but it brackets itself as “fake news” and only intermittently approximates the French paper’s consistent tone of bite, bile and confrontation.

If Charlie Hebdo is best known for its scathing, frequently heavy-handed and fundamentally serious satire -- directed at all manner of political, religious and corporate leaders, and reflecting what Charbonneau described as “all components of left-wing pluralism, and even abstainers” -- the publication’s name carries an untranslatable flavor of Gallic absurdity. It refers both to Charlie Brown, star of Charles Schulz’s “Peanuts” strip, which was once a popular feature, and also to legendary French president and national hero Charles de Gaulle, the absolute paragon of what Charlie exists to deflate. Perhaps a French reader can correct the details, but as I understand the history Charlie Hebdo is the successor to a weekly called L’Hebdo Hara-Kiri (hebdomadaire being the charmingly antiquated French word for a weekly paper), which was banned by the government in 1970 for its mocking coverage of de Gaulle’s death. (Did anyone, even the Onion, say mean things about Reagan on the day he died?)

Now, of course, the name of Charlie Hebdo is “changed, changed utterly,” as William Butler Yeats wrote, in a different context of bloodshed and martyrdom almost a century ago. It will forever be associated with the unforgettable and unforgivable crimes of a chilly morning, early in the New Year. That morning brought with it the worst terrorist attack in France for decades (probably since the late ‘60s) and the deadliest attack on freedom of expression in the recent history of Western journalism. It was a dreadful day for humorists, cartoonists, commentators and critics all over the world, and a dreadful day for the great city whose history of political and artistic revolution embodies the human struggle for liberty more than any other. It was also a pretty dire day for public discourse, much of it intemperate and ill-considered, and it’s likely to be remembered as a dark day for Muslims in the West, the semi-intended collateral damage of this attack, who will repeatedly be blamed for something they did not do and asked to renounce a noxious ideology almost none of them share.

Charlie Hebdo is not an anti-Islamic publication, at least not as such. You could say it’s an anti-Islamic, anti-Christian, anti-Jewish, anti-American, anti-nationalist, anti-capitalist and anti-militarist publication. It has long been committed to outraging true believers of all stripes; if it hasn’t gotten around to being anti-Buddhist, that’s only because that has not seemed necessary. Many people in France would have described it as being anti-French, at least until Wednesday. So when we encounter a shameful spectacle like that of Financial Times editor and columnist Tony Barber castigating Charlie Hebdo for "just being stupid," and suggesting that "editorial foolishness" invited disaster, we need to consider the source. Charlie was – and still is, let us hope – an implacable enemy of the complacent, Armani-suited global capitalist order that the Financial Times represents, an order eager to do business with the repressive despots and oil tycoons of the Muslim world and correspondingly eager to avoid giving offense. (The FT has since published a revised version of Barber's column, with the ire rendered more diplomatic.)

At least the FT was honest about articulating a view also held by many other mainstream media outlets who won’t admit to it. (Time magazine's Paris bureau chief wrote something remarkably similar after Charlie Hebdo's offices were firebombed in 2011.) That should serve as a clue that when considering Wednesday’s dreadful attack we cannot default to reductive nostrums about “Western freedom” and “Islamic intolerance,” although we should not dismiss those categories as irrelevant. Those are interdependent clauses or mirror images, one might say, each defined by the other and neither quite what it appears to be. The civil society made possible by Western capitalism is a great accomplishment, and also one that has external costs and consequences we rarely witness. One can believe both things at once. Similarly, the carnage in Paris represents a tiny proportion of the bloodshed inflicted on civilians in the Arab-Muslim world by both foreign military forces and Islamic militants. At virtually the same time as the Charlie Hebdo attack, 37 people were killed in a terrorist bombing in Yemen, likely the work of al-Qaida in the Arabian Peninsula. (Another 26 people died there last week in a suicide bombing.) None of which excuses the criminality of the Paris attack in the slightest, or lessens its horror.

We will hear the name of Charlie Hebdo invoked to stir up anti-immigrant passions throughout the West, to argue in favor of militarized police and a secret national-security state and endless war in the Middle East. (This event was pretty much manna from heaven for the Halloween coalition of Muslim-haters, from the talking heads of Fox News to Richard Dawkins and Sam Harris to right-wing French nationalist Marine Le Pen.) On the other side, we will also hear Charlie invoked by “moderate” and “responsible” people of Barber's ilk, to suggest that freedom of expression should only go so far and no further, and that if we want a stable and orderly world certain topics must be left alone.

It’s a pretty safe bet that whoever planned the Paris killings yearns for one or the other of those responses, and perhaps both. To foment an atmosphere of worsening internal and external warfare between Islam and “Western values,” and simultaneously to clamp down on those supposedly essential values, is pretty much the definition of “letting the terrorists win.” So when you hear people on both sides twisting this tragedy to their own ends -- using what befell those who stood on the outermost cusp of freedom as an argument for tyranny -- remember that those people do not speak for Charlie Hebdo. Charlie Hebdo would have mocked them without mercy. It has fallen silent, at least for now, and that urgent task now falls to us.