The causes celebrities feel comfortable backing -- and those they do not -- speak volumes. And it's not pretty 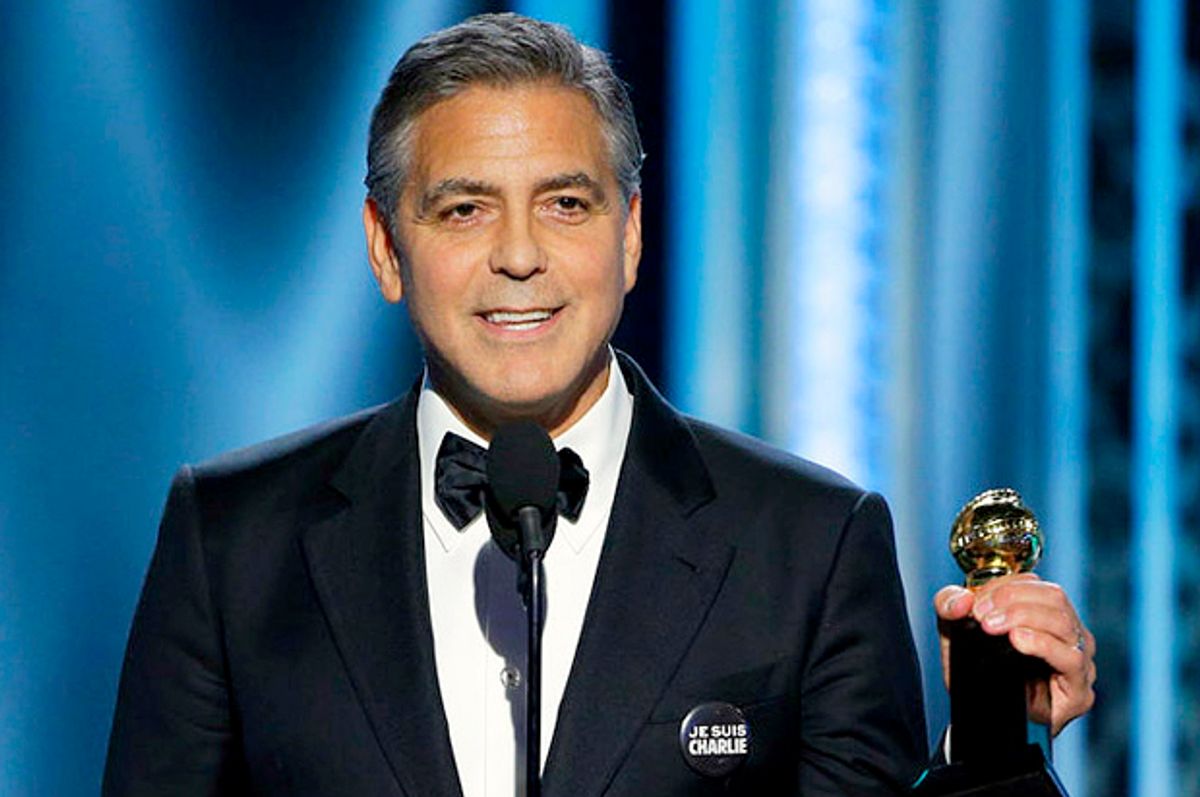 Race and gender politics at this year’s Golden Globes took an unexpected range of twists and turns. First, hosts Tina Fey and Amy Poehler shamelessly mocked the many rape allegations against Bill Cosby. Given that there has been a significant strain of public resistance among some African-Americans to the racial politics of a group of white women dethroning a powerful black man through the accusation of rape, Fey and Poehler’s bit was ballsy, to be sure. But the reality is that Cosby most probably did drug and/or assault many women, white and black. And in the absence of a day in court, he, at the very least, deserves our highest ridicule. It is he, not we, who has “destroyed his legacy.”

Then many of the award winners took especial care to express their solidarity with the people of Paris, still reeling over last week’s terrorist attacks that killed 17 French citizens, including 12 staff members of Charlie Hebdo, the satirical French magazine. Many actors and actresses including George Clooney, Kathy Bates and Helen Mirren displayed “Je Suis Charlie” signs and pins on the Red Carpet and during the awards. Clooney even took a moment to mention the massive solidarity marches that took place all over the world on Sunday to honor the victims.

I had tuned in to the Globes among other reasons, because Ava DuVernay’s film "Selma," a historical drama about the passage of the 1965 Voting Rights Act, was up for four awards including best song, best picture, best director and best actor in a drama. John Legend and rapper Common took home the award for their song “Glory.”  Common, ever the spoken word artist, declared in his remarks, “I am the hopeful black woman who was denied her right to vote. I am the caring white supporter killed on the front lines of freedom. I am the unarmed black kid who maybe needed a hand, but was instead given a bullet. I am the two fallen police officers slain in the line of duty. … Selma has awakened my humanity. Selma is now.”

Common clearly took a lesson from the book of Kanye West when he refused to say the words that felt as if they were hanging from the tip of his tongue: “Black lives matter.” I was struck by the audacity of inclusion in Common’s remarks and reminded that this is precisely the kind of racial discourse that we don’t need. But it is the kind of racial discourse in which liberal black folks are forced to publicly engage in order that they might not seem antagonistic to white people. Even when we want to say, Black lives matter, we talk about the lives of other people of color, and about white lives, too. We include everybody, because accusations of exclusion often make white folks less willing to listen to our critiques. Of course, all lives matter. But only some lives—black lives—are consistently treated as if they don’t.

Moreover, white people are not held to the same standard of radical inclusivity. As I watched multiple white celebrities don the stage and stand in solidarity with the victims of the Charlie Hebdo attack and other innocent bystanders, I marveled at the privilege that they had of being specific. Even though some people of color were casualties of the attacks in Paris, by and large this was an attack on white French satirists whose bread and butter was the routine disrespect of the Muslim community. Attacks on largely white victims received a huge and committed show of solidarity, while the Black Lives Matter Movement that has consumed our news cycle for the last four months was apparently not even worthy of mention.

That this happened on the same night that “Selma,” a film that has come under much fire for its refusal to tell a white savior narrative favoring LBJ, received no awards, perhaps matters, too.

It would be impolitic to say that Selma received no awards because of white liberal racism. I don’t particularly believe that. But I do wonder if America is really ready for a world in which black people are entrusted to narrate their own freedom stories and freedom dreams. Can white Americans deal with not being at the center of the black freedom narrative? Why is it the expectation that our history would favor our most ardent villains?  Can white people really stand knowing that in the broader black narrative of the civil rights movement, we are not especially enamored of white heroes?

The attacks on Charlie Hebdo are absolutely devastating. But the Je Suis Charlie movement among white American liberals is nothing short of disingenuous. It represents an attempt to displace black people from the center of a political moment that has been about state-sanctioned terror against black people. The fervor of white celebrities to speak of their white counterparts abroad while managing not to say even one word about the movements for racial justice happening here at home strikes me as being part and parcel of liberal white dishonesty on questions of race. In an award ceremony that took great care to express solidarity with victims of terror, that no reference was made to Michael Brown or Eric Garner or Tamir Rice is telling. That #BlackLivesMatter did not punctuate either Common or John Legend’s comments or the comments of any white presenter or awardee, when they so clearly should have, suggests that we are a country profoundly antagonistic to the reality of our own capacity for brutality and violence toward people of color.

White celebrities saw no issue with standing in solidarity with a newspaper that routinely antagonizes Islamic communities under the auspices of free speech. Freedom of speech is, of course, fundamental to creative practice, and defense of it is warranted. But failure to stand for freedom of speech, without also acknowledging the ways it has been used by Charlie Hebdo to antagonize Muslims is absolutely egregious.

I’m not saying blame the victim. I am suggesting that apparently -- to riff off an old hashtag from feminist activist Mikki Kendall -- #solidarityisforwhitepeople. I am suggesting that the clear political recentering of whiteness that I witnessed at the Golden Globes, amid all the funny moments and deserved tributes to good work, give lie to the liberal assertion that “all lives matter.” When Common, a black man, stands and acknowledges that all lives matter, but white people stand and only acknowledge themselves, there is no integrity to the assertion of inclusivity.

And as we look ahead this week to Oscar nominations, we cannot forget that this is the kind of political climate in which a magnificent film like “Selma” is being received. In 1965, it took the televised images of white brutality against peaceful citizens to move white people to action. Fifty years later, and white people simply refuse to acknowledge the brutalities we have all witnessed over these last months. Given this refusal of public acknowledgment, I am unsure what it will take to raise white liberal consciousness to an extent that will make a political difference. But I do expect some quid pro quo. If I defend the right of white women to call out a black man for rape, despite their own history of complicity in acts of sexual violence and state-sanctioned terror against black men, then I expect white folks to do the far more basic work of simply acknowledging that their lives aren’t the only lives that matter.