"American Sniper" and the culture wars: Why the movie's not what you think it is

Clint Eastwood's huge heartland hit is flawed, contradictory and America-centric -- but it's not war propaganda 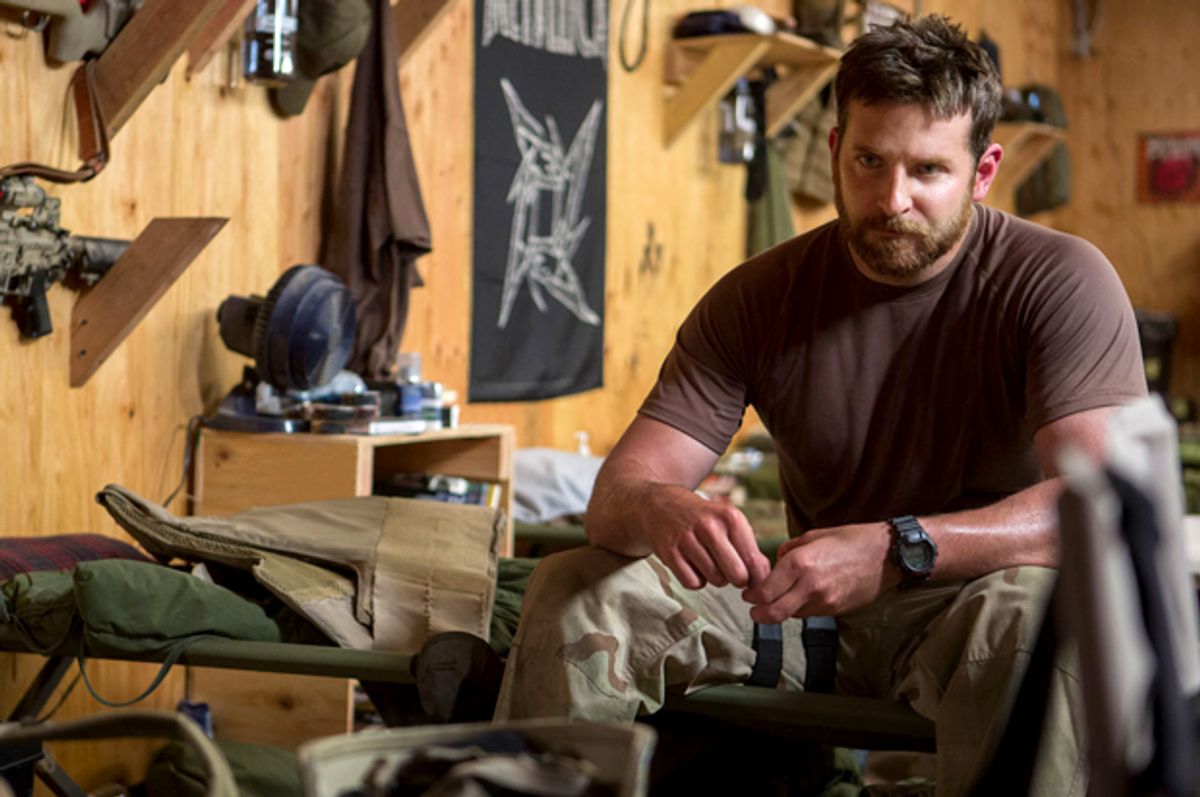 Debate about cultural topics, in our era of insta-judgment and unwarranted conclusions, becomes so flattened and foreshortened that the initial subject disappears from view. Anyone who’s ever read anything I have written understands that I am deeply committed to a view of culture as politics (and politics as an aspect of culture). But the back-and-forth social-media wars over “Selma” and “American Sniper” demonstrate how cultural works get reduced to “politics” in the least interesting sense of that word, meaning the tedious binary between “left” and “right,” neither word meaning what it claims to mean, that explains nothing and obscures everything. An entire range of complex divisions and intersections in American life -- based in geography, history, race, class, education and economics, in other words all the elements of “culture” in its anthropological sense -- get boiled down to the symbolic circus of bipartisan politics. (I am always tempted to say “meaningless” circus, but that gets people’s dander up and isn’t quite true. It means. It just doesn’t mean much.)

You can’t reduce Ava DuVernay’s magnificent and troubled historical drama “Selma” to its historical fudges on the relationship between Lyndon B. Johnson and Martin Luther King Jr. (I have a bigger problem, the more I think about it, with casting British actors in all four major roles as prominent 20th-century Americans.) The LBJ question is no more than a footnote or parenthesis within the film itself, but one that for the moment has contaminated its reputation. Similarly, Clint Eastwood’s Iraq War drama “American Sniper” is now defined by its extraordinary $105 million box-office performance over the MLK holiday weekend, apparently driven by white male moviegoers in the heartland states. It’s very close to the biggest January opening in Hollywood history, and by far the biggest in Eastwood’s directing career, which includes quite a few hits.

I don’t mean to equate the two films: “Selma” is a more original and more successful work, with deeper historical resonance. But it’s almost as unfair to describe “American Sniper” as nationalistic war propaganda as to describe “Selma” as anti-white historical revisionism. I say “almost” because Eastwood and screenwriter Jason Hall leave themselves halfway open to that interpretation with their measured and deliberately ambiguous portrayal of Chris Kyle, the profoundly unreflective cowboy-turned-sharpshooter played in the movie by Bradley Cooper. But despite Eastwood’s reputation as the strong, silent type both as a movie star and a director, you really can’t accuse him of being an apologist for violence or depicting it as free of consequences. If one theme ties together his better films, from “High Plains Drifter” to “Sudden Impact” to “Unforgiven” to “Gran Torino,” it’s the lingering trauma of violence and the difficulty of overcoming it. That’s the real subject of “American Sniper” too, no matter how many racist tweets from yahoos in Oklahoma it may have provoked.

As Salon’s Laura Miller discussed in her memorable review of Kyle’s memoir (which provoked considerable ire among his right-wing admirers), the real Kyle, who by his own reckoning shot more than 250 people in Iraq -- before being shot himself by an unstable fellow veteran -- absolutely thought of himself as a steadfast warrior for good in a Manichaean universe. He stood tall against the “bad guys” and “savages” of the Islamic world, confirming the worst Arab-held stereotypes by getting a “Crusader cross” tattooed on his trigger arm. He apparently never questioned the politics and strategy behind the sequence of events that sent him to Iraq in the first place, and couldn’t be bothered with parsing fine distinctions between al-Qaida, the Saddam Hussein regime, the Iraqi civilian population and the foreign fighters from all over the Islamic world who later joined the Iraqi insurgency. Unsurprisingly, his memoir never mentions Abu Ghraib or Gitmo or “enhanced interrogation” or the total absence of Iraqi WMD or any connection between Iraq and 9/11. He recounts telling a superior that he wished he were free to gun down random unarmed people based on his own godlike judgment, but was nonetheless obeying the military’s pantywaist rules of engagement.

It’s true that Eastwood and Hall – and especially Cooper, an actor who can display visible internal torment without apparently doing anything – have made the movie’s Kyle more sympathetic, more complicated and less of a raging dumbass. I’m aware of the disputes between people who attack “Selma” for its lack of historical veracity and those who are exercised about the depiction of Chris Kyle straying from documented facts. It’s a deeply uninteresting game of gotcha, in my judgment – both movies offer an interpretation of real events for specific narrative purposes, and I think both choices are generally defensible. Go ahead and attack Eastwood for making a movie that's totally uninterested in the underlying politics of the Iraq conflict, and that depicts its Arab characters in cursory and stereotypical terms. That’s entirely legitimate, and indeed I think those America-centric aspects partly undermine the film’s aims. But to assign Eastwood some Bush-Cheney war-booster agenda because he supported Mitt Romney in 2012, or even because some unknown proportion of moviegoers have seized on it that way, simply isn’t fair.

“American Sniper,” the movie, is a character study about a guy who sees himself as fundamentally honorable and decent, but whose simplistic moral code turns out to be exceptionally poor preparation for the real world and real warfare. How well Eastwood accomplishes that goal, whether or not it’s worth doing and how much that may or may not reflect the real story of Chris Kyle are all matters for debate. In Cooper’s marvelously contained physical performance, Kyle’s beefy, cheerful Texas certainty seduces us part of the way toward his self-righteous vision of himself. Or it does if you let it, and depending on how you process the film’s opening scene, in which Kyle faces a decision about whether to shoot a woman and child on a Fallujah street who appear to be carrying a grenade. The Marine serving as his spotter groans, “Man, they’ll send you to Leavenworth if you’re wrong.” I couldn’t help reflecting that, no, they almost certainly won’t.

In their quest to create a relatable hero for the mainstream American audience – the proverbial dudes-who-don’t-go-to-movies, who have evidently shown up for this one – Eastwood and Hall slice the moral equation awfully fine. They never directly challenge Kyle’s assertion that all his Iraqi kills were “clean” and all his targets “bad guys,” and they manufacture a fictional rivalry between Kyle and a mysterious insurgent sniper called Mustafa, who never speaks but is so physically striking – long, lean and distinguished, with amazing eyelashes – as to be beautiful rather than handsome. It’s like a forceful undercurrent of Orientalist and homoerotic fantasy: Which of these guys will end up drilling the other one with an impossible rifle shot from 2,000 meters, the suave mustachioed Arab clad all in black or the buff, bearded Texan with the frat-boy ball cap? (You don’t even get one guess.)

On the other hand, “American Sniper” never shies away from depicting Kyle as racist and xenophobic, an innocent abroad rendered armed and exceptionally dangerous. After sitting through the film twice, I’m more convinced than ever that there’s a level of sardonic commentary at work that is sometimes subtle and sometimes pretty damn obvious. Pay attention to Cooper’s increasingly congested body language, the posture of a man stricken with unmanageable psychic distress. Pay attention to the use of the phrase “mission accomplished” late in the film, or the stateside scene in which Kyle runs into a Marine whose life he saved in Fallujah and can’t even make eye contact with the guy. This is a portrait of an American who thought he knew what he stood for and what his country stood for and never believed he needed to ask questions about that. He drove himself to kill and kill and kill based on that misguided ideological certainty – that brainwashing, though I’m sure Clint Eastwood would never use that word – and then paid the price for it. So did we all, and the reception of this film suggests that the payments keep on coming due.