NY Times columnist is the latest critic of "Selma" for its depiction of LBJ. Here's why a new racial lens is needed 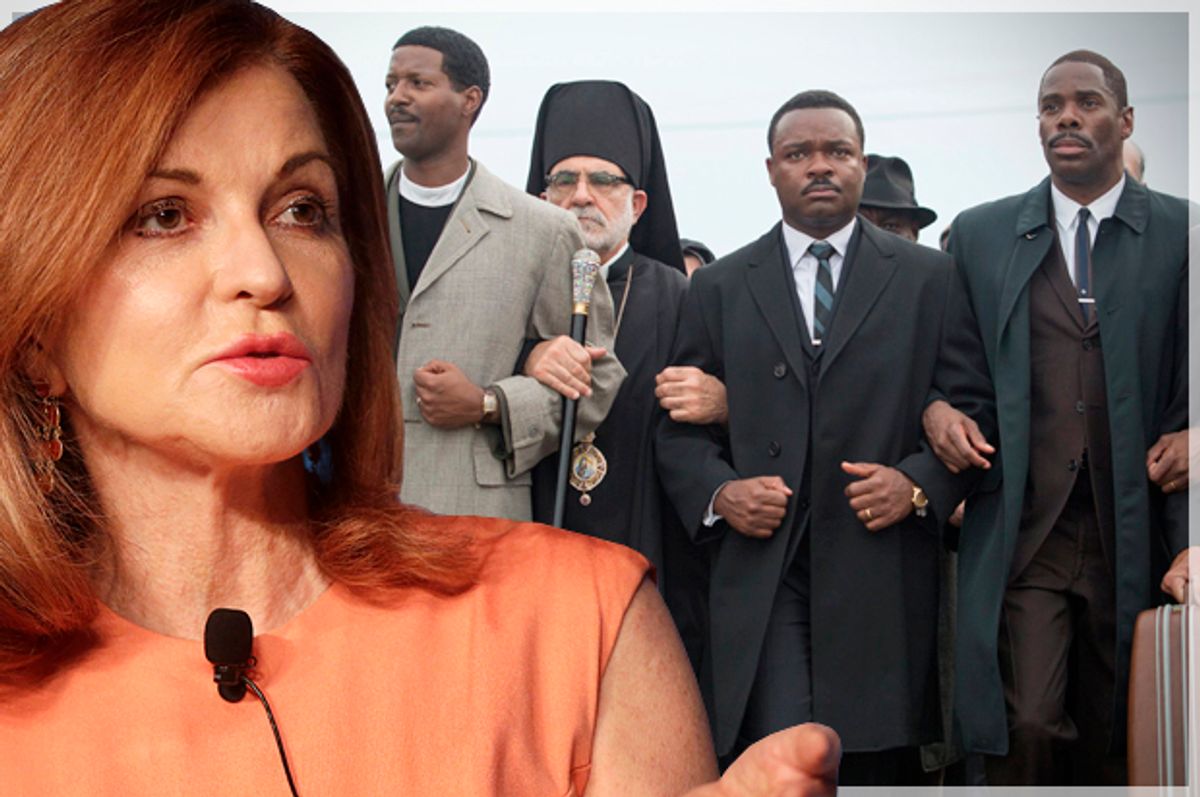 New York Times critic Maureen Dowd saw "Selma" last week “in a theater of full of black teenagers.” Her ethnographic impressions of the “stunned” emotional responses that these D.C. teenagers had to seeing four little girls blown up in an Alabama church basement and watching civil rights leaders viciously clubbed during a march in Selma reek of the kind of voyeuristic and clueless white gaze often used to devalue and pathologize urban youth.  They become fascinating objects of study to those who don’t get to spend a lot of time with them.

And it is precisely these kinds of impressions from white people, the inability to make sense of genuine black emotion, the inability to recognize what filmic representations that respect the interior lives of black people actually might look like, that have contributed to the disingenuous backlash against the Selma film.

This magnificent and powerful film has, at this point, been endlessly derided by white and black critics alike who say it fails to get the story just right. Among white critics, its cardinal sin is failure to pay proper homage to Lyndon B. Johnson for being a champion of black voting rights. He’s represented in the film as a reluctant ally in the civil rights struggle, as one whose racial views evolve over time.

Dowd rips what she calls Ava’s DuVernay’s “artful falsehood,” for having the potentially and apparently regrettable result of making the “young moviegoers [now] see L.B.J.’s role in civil rights through DuVernay’s lens.”

“Artful falsehood,” Dowd tells us, “is more dangerous than artless falsehood, because fewer people see through it.”

But the truth is, a new racial lens is exactly what America needs. In "Selma," we learn what films look like when directors and cinematographers who love and respect black people turn their gaze on us. "Selma" artfully displaces a white gaze, and it is this unnamed and unsettling anxiety that sits at the heart of so many of the critiques of the film.

This white racial anxiety of not being at the center feels to me far more dangerous to black youth than seeing a film that tells them a story about themselves and their history. Having taught in D.C. public schools, I know D.C. youth aren’t checking for any kind of saviors, white or black. Like most adolescents, they are looking to find their path and make their mark.

Among black teenagers who have acutely felt the pain of the deaths of Trayvon Martin, Jordan Davis and Michael Brown, this film offers a long history and genealogy for black pain and black resistance. The film moves us beyond the mere spectacle of black death. For instance, we don’t just see the killing of Jimmie Lee Jackson; we are forced to watch and reckon with his grieving grandfather identifying his body at the morgue. The shot of Jimmie’s mother’s grief-stricken face at her son’s funeral could be superimposed with the face of Mamie Till Mobley, or Coretta Scott King or Sybrina Fulton or Lesley McSpadden, mothers and wives of boys and men gone too soon. As the final Selma march commences, the film cuts to a shot of Jimmie’s grieving mother rocking, crying.

That kind of storytelling is haunting and deliberate. Long after you walk away, it clings to you.

"Selma" achieves both narrative breadth and affective depth. DuVernay added 27 new characters to a screenplay heavily focused on LBJ and MLK, most of them women. That sense of elasticity in the storytelling stretches us, demanding of us a more inclusive, less-sexist vision of the black freedom struggle. Beyond that, the movie asks us to understand the spiritual weight, the indignity, the brutality, the visceral pain of racial injustice and the vision, perseverance  and digging deep required every day to stand up, fight back and keep moving.

Many white people missed this, because they need the civil rights movement to be fewer dirges and more redemption songs. Just as there has been a failure of white people to truly grasp the singularity of the racial atrocities committed against black people (and indigenous people) in the name of white supremacy, there remains a studied indifference to the ways that we are, 50 years later, feeling these pains of democracy aborted all over again.

Mothers cry out and grandfathers weep that our nation’s past sins are revisited upon another undeserving generation of black people vulnerable to injustice by a system and a people that forget their capacity for brutality far too quickly.

Blood spilling from out stretched palms, the perpetrators demand absolution. Without confession. Or repentance. Or restitution.

“LBJ was good to you,” they tell us. They expect us to be solicitous in our gratitude. Gratuitous. That one wrong among many was righted, even from a man known for his gratuitous use of the N-word, deserves our scopic memorialization. White folks forget that even the abolitionists did not necessarily think black people were equal human beings. Granting our rights, as if rights are the property of white people, has never been a guarantor of white respect for black humanity.

Black youth sense these indignities even when they lack a full language of articulation. They live them daily. Especially in a massively failing public school district like D.C. Especially in a moment, when despite desegregation being the center piece of the civil rights movement, we have been reminded that more than half of all public school children live below the poverty line. That those children are disproportionately black is no accident.

As I have listened in my blackademic circles to the various critiques of the ways that "Selma" did not get the story right, I am reminded that for those who are caretakers and guardians of black history, artistic license feels too risky. The real stories have yet to be fully told. How dare we subject them to the tools of representation, which often seem to be more hammer than chisel when it comes to carving out the beauty of our lives? Couldn't we just have more Diane Nash and more Amelia Boynton? In a world where black lives and black histories mattered, they’d have their own films, alongside Ida B. Wells, and SNCC, and Fannie Lou Hamer.

But how will we ever have any of those stories if we can’t trust a black woman to tell this story? We don’t trust black women to be our philosophers and theorists, our political strategists, or our film directors. Directing, like quarterbacking, we are told to believe is the province of white men.  This is why the Oscar nomination "Selma" received for best picture feels hollow—the academy clearly does not respect DuVernay’s directorial vision. Save Steve McQueen, black folks, men included, are rarely deemed fitting of recognition in any kind of academy, except music. White women are not respected as directors either. It is precisely that intersection, that double jeopardy, of blackness and womanhood that gives so many black women the exceptional ability to artfully render black life, to see it in all its fullness, to move beyond the perspectival limits of whiteness and maleness. That same intersection often becomes a liability in the quest for institutional recognition of black female genius.

Ava DuVernay surely knows that. So she made the film she wanted to make. One that features Amelia Boynton and Coretta Scott King having a conversation about what it means to be prepared, as we hear Coretta talking about her desire for a more active role in the strategy and organizing side of the movement. One in which Diane Nash reassures the men, on their car ride into Selma, that this is the next big place for movement building. One in which Annie Lee Cooper slaps the policeman who manhandles her.

In this film, we see black women resisting, organizing, strategizing and cajoling. That we want to see even more of this tells us that "Selma" is akin to being gifted a few acres of our own after too many years gleaning cotton in fields that have not belonged to us.

A black woman has gifted this to us.  Ava DuVernay ushers us in “Selma” into the interior and affective lives of black people. In her directorial approach, I hear echoes of Anna Julia Cooper’s famous statement, “when and where I enter in the undisputed dignity of my womanhood, without violence, suing, or special patronage, then and there the whole race enters with me.”

Black men don’t tell race stories like this. This kind of film is the unique result of what black feminist scholars call the “visionary pragmatism” of black women filmmakers.

And this is what feels so false and condescending and egregious about Maureen Dowd admonishing Ava DuVernay, that “On matters of race—America’s original sin—there is an even higher responsibility to be accurate.” She didn’t levy such a critique of "Lincoln’s" failure to include Frederick Douglass, a trusted adviser of the president. But more than that, there is this.

Being more accurate does not mean one has told more truth. Read any Toni Morrison novel, and you’ll learn that novels often tell far more truth than autobiography. DuVernay tells us many truths in this film about the affective and emotive dimensions of black politics, about the intimacy of black struggle, about the spirit of people intimately acquainted with daily assaults on their humanity. The recent tragic killings of unarmed youth have surely taught us that if we don’t work from a presumption of black humanity, facts don’t mean very much in our interpretation of events.

More than that, those in power choose the “facts” that matter.

What I hope those D.C. high school students and every high school student that will get to see this film learn is that ours is a beautiful struggle. I hope they learn that despite our defeats, we’ve had our triumphs, too. I hope they see how integral women were to this struggle. I hope they have a clearer picture of what revolutionary leadership looks like – that these people ate and slept, loved and fought, shaved and got help putting on neckties, struggled with the right words to say and sometimes made mistakes. They rose to meet the challenges of their times. And we can, too.