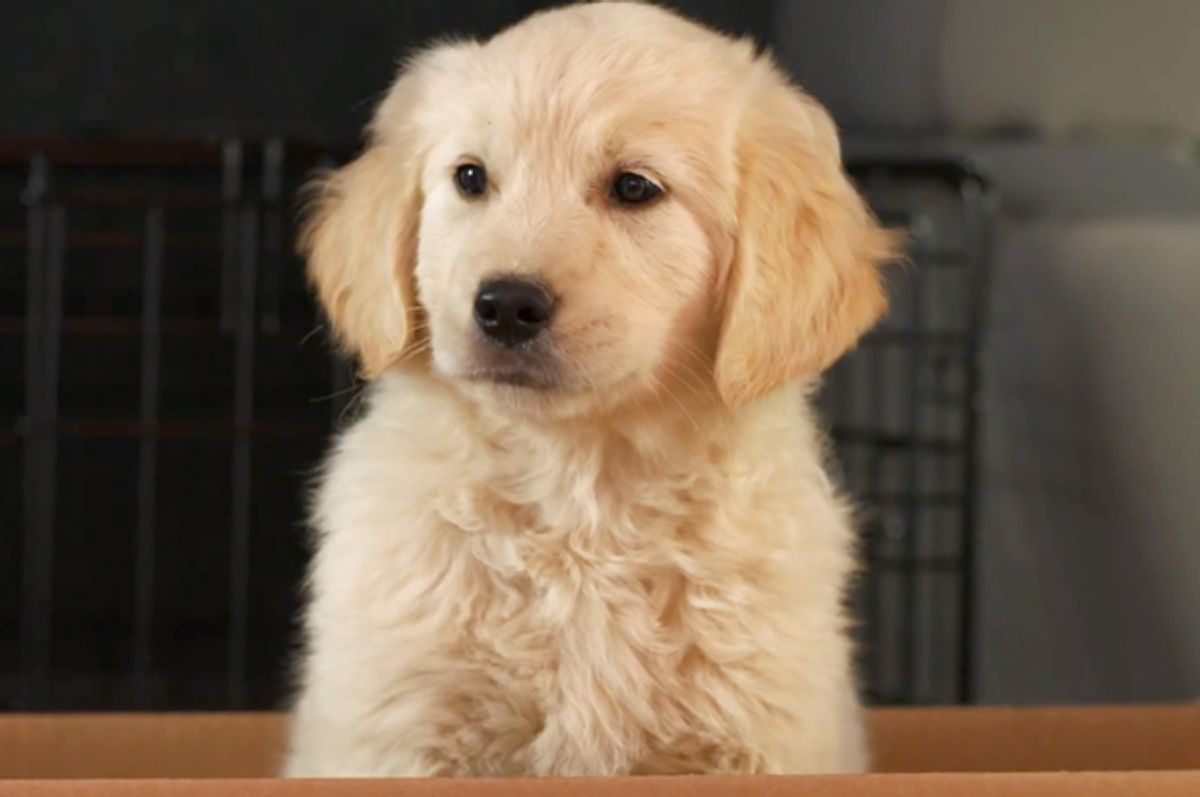 I've got nothing against the puppy. That puppy is an irresistible little bundle of fluff. But seriously, a puppy is what gets GoDaddy in hot water for a Super Bowl ad? A company that has made dumb, sexist, patently offensive commercials into an annual tradition -- a tradition that football's greatest day never lacks for anyway -- has now turned around and decided it cares about sensitivity when it comes to a joke about a dog? Dammit, now I have to go try to remember where I left my Humorless Feminist hat.

The ad was to be a satiric spin on the kinds of heart tugging spots that are always branding gold – in particular Budweiser's squee-inducing tale of a lost puppy rescued by his Clydesdales buddies. The GoDaddy ad, which debuted just Tuesday, features a similar adorable, plucky lost pup named Buddy trying to find his way home – only to be greeted by his enthusiastic owner of "Gabby's Goldens" – who is relieved for a surprising reason. "I'm so glad you made it home," she says as the dog leaps into her arms. "Because I just sold you on this website I built with GoDaddy. Ship him out!" Perpetual GoDaddy spokesperson Danica Patrick appears briefly in the spot, as the driver taking a whimpering Buddy to his new residence.

The ad immediately outraged animal lovers. A Change.org petition against its airing was quickly launched and racked up thousands of supporters, while PETA observed that it proved anyone who sells animals is "a callous jerk." An animal rescue group, meanwhile, told GoDaddy on Twitter, "If you can buy a puppy online and have it shipped to you the next day, it's likely you're supporting inhumane breeding."

By Tuesday afternoon, GoDaddy CEO Blake Irving announced on Twitter that "What should have been a fun and funny ad clearly missed the mark and we will not air it." In a follow-up statement, the company said, "At the end of the day, our purpose at GoDaddy is to help small businesses around the world build a successful online presence. We hoped our ad would increase awareness of that cause. However, we underestimated the emotional response. And we heard that loud and clear. The net result? We are pulling the ad from the Super Bowl. You’ll still see us in the Big Game this year, and we hope it makes you laugh."

It was a swift backpedal for a company that's been promoting the spot for weeks. Earlier this month, GoDaddy  excitedly named Buddy its "Chief Companion Officer" while announcing he'd "just wrapped his first Hollywood-style commercial shoot in California." And it'll be interesting to see what the company comes up with now – and whether its alternate spot will live up to the promise to "make you laugh." This is, after all, a company that gleefully courts controversy, year after year, serving up beautiful women sloppily making out with nerdy guys or enthusing about keeping their "beavers" safe, a brand that is basically only known for one thing and that thing is women with big boobs in tank tops.

And it's not just GoDaddy. This year's Super Bowl is already promising to serve up its classic array of  sexist tropes – with Carl's Jr. already earning millions of YouTube views with its new "all natural" spot. Spoiler: It's a full minute of sophomoric model ogling and tomato pinching. And lest you want to argue that the puppy ad was different, it was the notion of trading living beings that put it over the line, let me remind you of the Bridgestone ad of a few years back, in which a driver unhesitatingly shoves his wife out of the car rather than forfeit his tires. His tires. That was also the year of angry males driving around taking "man's last stand" because they're enraged because they have to do emasculating things like "shave" and "take your call." Or remember three years ago, when Victoria's Secret model Adriana Lima and Teleflora promised horny men that if you give women flowers, "You shall receive"?

The GoDaddy puppy ad was incredibly poorly thought out. But it's amazing that the company got such a powerful viewer reaction – and that it worked so quickly to assure that it was an ill-advised spot and would not air it – when it's built its business around treating women exactly like cheap, easily replaced commodities. It's incredible that plenty of other big brands spend millions of dollars to do the same every year, and with no huge public outcry, no apologies. And it's depressing that we apparently care more about a fictional tale involving a puppy than we do about the way that real women are treated in the media, Super Bowl Sunday and every day. You don't need to be human to get people to care about how you're depicted in an ad. You just don't need to be female.