Not because Fox News is a perpetrator of widespread misinformation, I guess 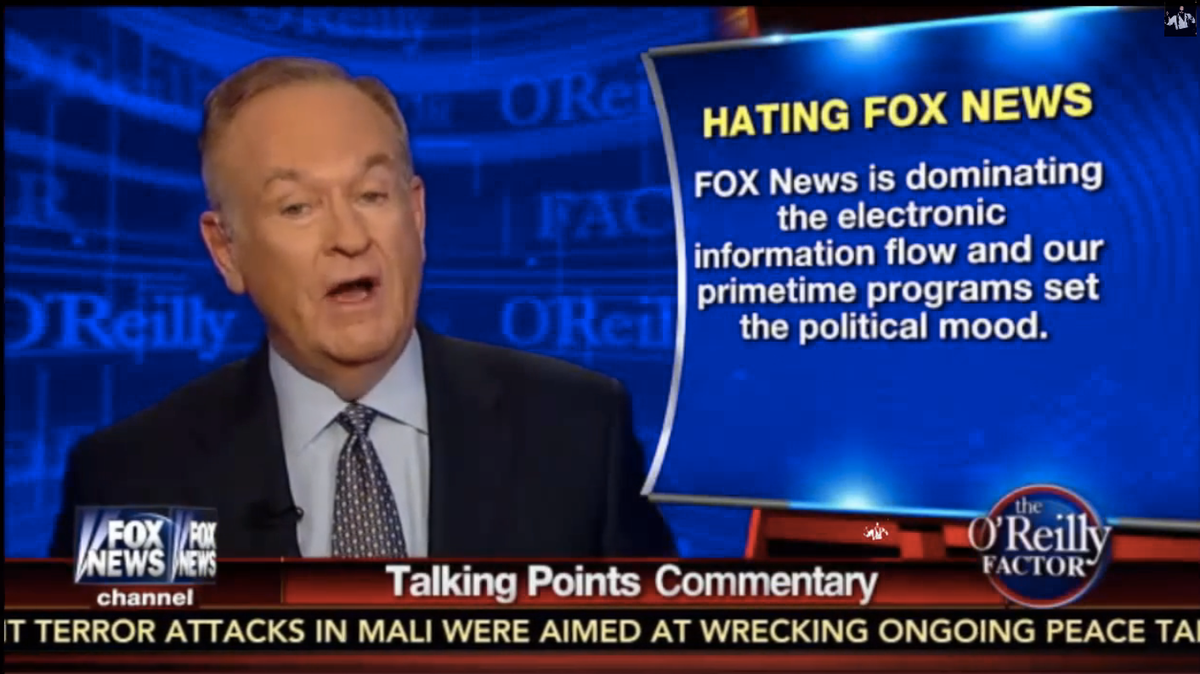 On Monday evening's edition of "The O'Reilly Factor," Bill O'Reilly addressed a new poll from Quinnipiac University that found 29 percent of the country (the largest single group of respondents) trust Fox News more than any other cable news network.

O'Reilly argued that Fox News gets so much hate from Democratic politicians and liberal pundits basically because they feel threatened.

"Hating Fox News is about competition, power and money at the highest levels," he said. "If FNC did not exist, America would be a far different place and the far left ideology would have a far easier time. But we do exist and now dominate the primetime news cycle. Not good news for progressive politicians, the liberal media, and crazed zealots on both sides. Therefore, meetings are held, strategies devised, political assassins hired."

This has been O'Reilly's tactic for the past few weeks, as he is hammered with allegations that he fabricated reports of his early days as a journalist--specifically, that he was outside Lee Harvey Oswald's friend George de Mohrenschildt's Florida home when de Mohrenschildt committed suicide.

On Monday, liberal watchdog Media Matters reported that yet another journalist had verified that O'Reilly could not have been where he said he was. Eric Hanoki reports:

Edward Jay Epstein, an investigative reporter and author who taught at MIT and UCLA, wrote a March 9 Newsweek piece calling O'Reilly's JFK claim "impossible," adding: "How do I know? I was the actual -- and only -- reporter interviewing de Mohrenschildt on the last day of his life in 1977." He added that he spoke with investigators and de Mohrenschildt's family members, and "From what I learned about the case, O'Reilly's story does not fit the facts."

Hugh Aynesworth, a former bureau chief for Newsweek and the Washington Times who covered the de Mohrenschildt story, previously said "I didn't see him [O'Reilly] there. I was at the police department or that house for hours, and he just was not there."