You Must Hear This! Fairfield Parlour's "Aries" 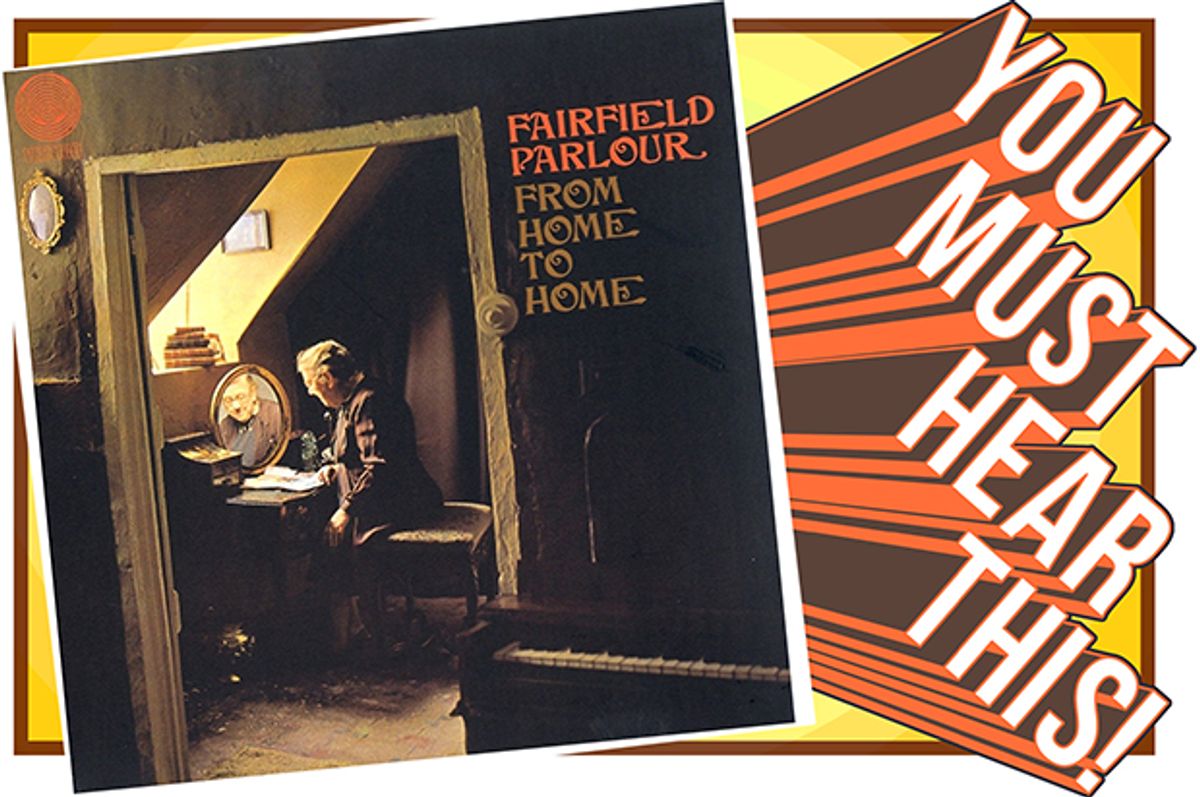 You Must Hear This! is a series that shines a light on overlooked songs that deserve a close listen. Click here to explore other articles in the series. This post has been updated.

Here we have a band that did the unthinkable: they changed their name. And not because they were sued or because a band member left or died. After releasing two albums under the perfect-for-a-psychedelic-band-in-the-late-sixties name Kaleidoscope, the British four-piece decided to clear the slate, renaming themselves Fairfield Parlour for their album "From Home to Home."

It is a sprawling mosaic of an album. The songs run the emotional gamut from whimsical ("I've brought along some insects/You may call them by my name/And there is also a monkey") to downright bleak ("Emily heard the music/She tried to dance but fell on her face in the middle of the floor/And all the children yelled for more").

The album starts off with the soaring "Aries," which paints a picture somewhere between Norman Rockwell and David Lynch, except very British:

I used to collect cigarette cards
Emma Crabley was a face I knew
Spike Kasperak, he owned the pub
He had a wooden leg
Oh the names we used to call him

It gets even darker from there. Things don't go well for Spike.

The song takes about a minute to really get going, and once it does, it is a richly detailed world seen through the eyes of British youth. Like most Fairfield Parlour songs, it doesn't always rhyme when you think it will and its quirky structure will knock you off-kilter every so often:

I contacted Peter Daltrey, the band's singer, keyboardist and lyricist, to ask him about this song, and was delighted to engage in an email correspondence with him. I have edited it lightly for length and clarity:

The band changed its name from Kaleidoscope to Fairfield Parlour – it seems such a drastic move to change names mid-stream, after releasing albums. Weren't you concerned that you might lose fans?

Kaleidoscope had certainly made its mark with two albums that reflected the musical style that was exclusive to the mid to late Sixties. But the success that had been predicted for the band failed to materialise for various reasons, mostly concerned with serious flaws in the operating methods of our record company and the lack of real interest from our booking agency.

In late '69 we engaged a manager who gave us a much needed shot in the arm, boosting our confidence and convincing us that a change of direction and musical focus was required. We added new instruments to our line-up in the form of flute, keyboards, marimbas and Ed even had a bash at cello. It was the addition of these instruments together with one eye on changing musical trends that influenced the writing and recording of "From Home to Home" – although having said that it must be obvious to listeners of the album that there are legible traces of Kaleidoscope in there.

"In My Box" and "Sunny Side Circus" were Kaleidoscope songs, the latter having been recorded when we were still with Fontana – but rejected at the time.

We weren't worried about alienating our "fans" because at that stage we didn't think we had any!

Did the Los Angeles band Kaleidoscope figure into the decision at all?

[We] knew nothing about the US band of the same name. And hadn't even heard of the oddly named "Tangerine Dream."*

What was the writing process in the band? Were lyrics written first, then put to music?

The lyrics were always written first – passed across to [guitarist Ed Pumer] who then worked his magic. The song structures were honed during exhaustive rehearsal sessions prior to recording. We never wrote in the studio. Couldn't do it. We always went in with the song fully planned and arranged.

What style of music would you say "From Home to Home" is? I hope you don't find this a terribly odd question – I think the music sits outside or between various genres, and I would love to know where you see it fitting in.

I would agree that the album is difficult to shoe-horn into a stylistic box. And I'm glad that is the case as the album is a unique artifact of that strange interim period between psychedelia and progressive.

I love the cover of "From Home to Home." Recently I came across a photo of the full album gatefold, and was blown away to see the band photo on the back, in a continuous photo with the front.

Click to enlarge. Does this album cover remind anyone else of this?

This must have been an incredible feat to pull off in 1970.

The photograph was taken by Keith McMillan – who went by the name of Keef. I think he went on to have a successful career making music videos.

The session was arranged and we just turned up. The cottage was derelict and in a very dangerous state. The old lady in the photograph is [drummer Dan Bridgman's] grandma! Getting her up the stairs and over gaping holes in the floor was very difficult.

The resulting image is stunning in its simplicity and depth. The light is superb. And I love the melancholy mood, designed to echo the album track, "Emily."

I have tried tracking down Keef to see if there were any other shots taken, but have not been able to find him. It would be nice to see any outtakes he might have.

Are the lyrics to "Aries" autobiographical? They are so vivid and specific that they come across as a slice of your childhood.

The song has vivid autobiographical elements – many of which have been adapted to suit the lyrical structure. But all based on fact.

In 1962 my rocker mate, Les, bought himself a greasy old motorbike. I immediately wanted one – but being me I wanted a shiny new one. We had just been to see Cliff Richard's latest film, "The Young Ones," a typically wet musical of the time, with dopey songs written by Tin Pan Alley hacks hoping to cash in on what the industry thought would be a rock 'n roll flash-in-the-pan teenage craze.

In the film I spotted a great looking Triumph 200cc motorbike with cowhorn handlebars and a high exhaust. I had to have it – and pestered my poor dad until he came up with the required deposit. I paid for the hire purchase each month out of my meagre earnings.

Les and I had a group of crazy mates: Mad John, Big Evans and Whitey – the latter a skinny kid with snowy hair and a rosy acned face.

Larking around on some waste ground one day we found an abandoned wreck of a motorbike. A couple of the guys were handy with a spanner and had some school book knowledge of engines. We got the thing going and used it to tear around the waste ground. Without tax or insurance it could not go on the road. But that didn't stop young Whitey. In a cloud of oily exhaust he disappeared into the distance, hit something – I forget what but it wasn't Woolies window – and went to rocker heaven. This was pre-helmet legislation so none of us wore helmets at the time. Shame – Whitey could have done with one.

The rest of the gang carried on with living – and discovered a new interest: girls. Courting was done after dark in the local park. We each had our hearts broken by peroxide blondes.

We all smoked like the proverbial factory chimneys. In those days cigarette packets contained a card that could be collected until you had the whole set. The cards were themed – film stars, cars, birds, foreign flags, etc. – and were attractive. Smokers collected them in boxes or framed them to hang on the walls of their nicotine-stained homes – enjoying them until they inevitably succumbed to lung cancer...

When the band eventually formed in 1964 we used to rehearse – or practise, as we used to call it – in a school hall in Acton. The caretaker was a surly bastard. He always seemed annoyed that we had to have the hall unlocked in the evenings to let us in – and then drag him back from the pub next door to lock up when we'd finished. Luckily we didn't rile him even more or complain about his miserable face – turned out he'd killed someone years ago and caretaking was the only job he could find once he'd been freed from clink... Sadly he wasn't called Spike Kasperak...

When I wrote the lyric around 1969 I wasn't a kid anymore. The band had fought for years to succeed in the music business but by most people's standards had failed. We'd been to the school of hard knocks. Adulthood and the future had arrived in the form of a new beginning with Fairfield Parlour. But my thoughts were drawn to the past, to my childhood and the places and people that had shaped me. Who was I...? I guess that was my motivation for writing the song. The title...? My birth sign, simple as that.

Peter Daltrey is currently finishing up his 19th album (by his own estimate). He is also a gifted photographer.

*Peter Daltrey and I communicated again after this interview ran and he clarified that he was speaking about the band, not the album.