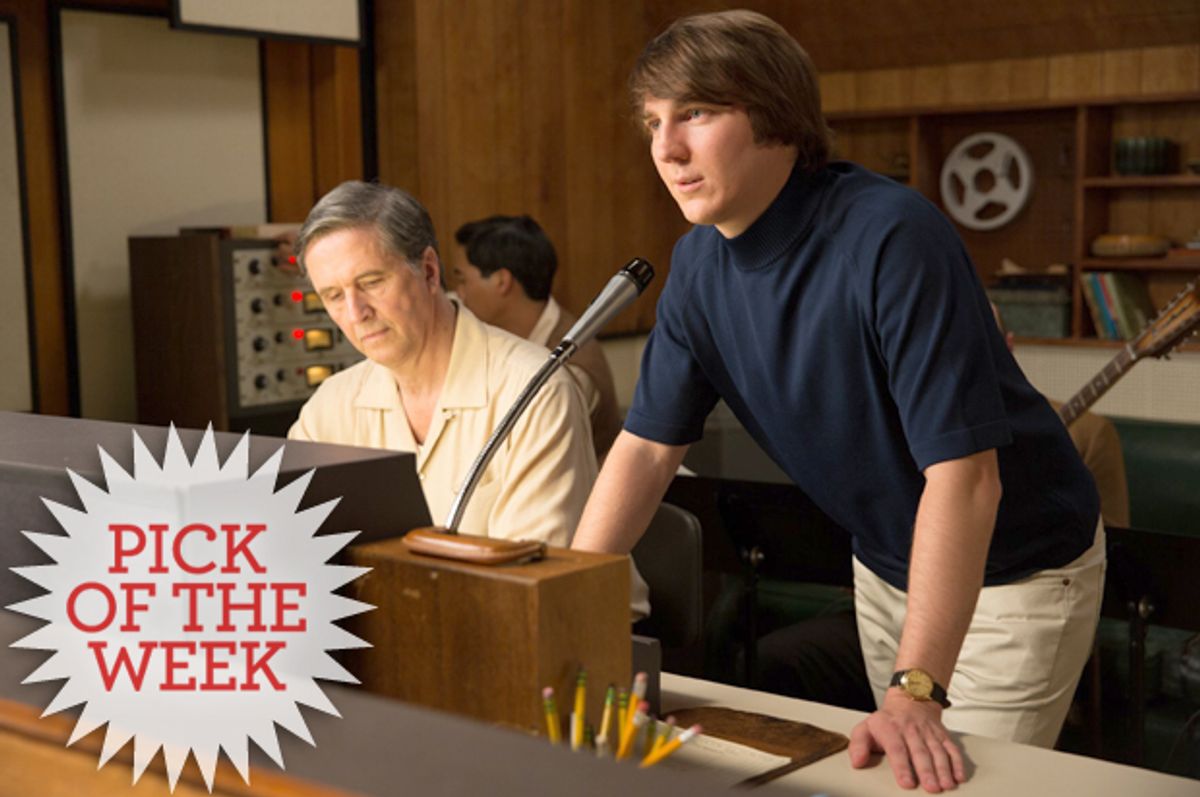 I came out of the flawed, deeply moving and often beautiful Brian Wilson biopic “Love & Mercy” thinking about D.H. Lawrence’s poem “Song of a Man Who Has Come Through.” For one thing, that title serves as a pretty good description of Wilson, the co-founder, principal songwriter and all-around musical genius behind the Beach Boys. This powerful and intimate film by Bill Pohlad, a veteran movie producer who reveals himself here with a genuinely surprising directing debut (he made an unreleased film in the ‘90s), tries to evade the typical pitfalls of the rock ‘n’ roll biography by focusing on two turning points in Wilson’s life, separated by 20 years or more: The creation of his quasi-symphonic masterwork “Pet Sounds” in the mid-1960s, along with his subsequent mental breakdown, and his disastrous, dependent relationship with a manipulative therapist named Eugene Landy in the 1980s.

Wilson is played by Paul Dano as a young man, and then by John Cusack as a middle-aged wreck struggling to reclaim himself. The two characters – they don’t exactly seem like the same person – and the two drastically different periods of Wilson’s life and American cultural history weave in and out of each other in a devilishly complicated tapestry. (Among other things, “Love & Mercy” features some of the best film editing I’ve seen recently.) Both of them are heartbreaking, but in entirely different ways. Dano captures the blend of innocence, ambition and intense need that made songs like “Caroline No” or “God Only Knows” possible, while Cusack – in his own way as much of a generational touchstone as Wilson himself – gives a magnificent performance as a man lost within his own body and mind, eager to reconnect with the world but not quite sure where it is or whether it still exists.

Since those two actors don’t much resemble each other, and Cusack looks nothing like Wilson at any age, some viewers have drawn parallels with Todd Haynes’ “I’m Not There,” in which a varied group of actors (not all of them white or male) played various incarnations of Bob Dylan. It’s reasonable to suggest that there’s some degree of subterranean thematic connection, especially since both films were co-written by Oren Moverman (the earlier one with Haynes; this one with Michael Alan Lerner), but I think the effect is entirely different.

“Love & Mercy” is not a fragmentary narrative experiment but an attempt to find coherence within apparent contradiction, and perhaps also an attempt to locate grand cultural allegory within a story that remains tightly focused on one person’s dilemma. Pohlad never shifts the focus away from Brian Wilson and his immediate environment, whether that’s the studio where the extraordinary sonic discoveries of “Pet Sounds” were created or the anonymous Malibu beach house where Landy keeps Wilson confined and sedated. But tremendous meaning and information is packed into the sound-and-vision experience of this film by Pohlad and cinematographer Robert D. Yeoman, from the sunstruck, cinéma-vérité feeling of the 1960s footage to the tinny background Muzak of a Cadillac dealership, circa 1985. It doesn’t hurt, of course, that the soundtrack repeatedly calls upon the work of one of the most original craftsmen in the American pop tradition – the notorious legal and contractual entanglements of the Wilson-Beach Boys musical catalog have been vanquished, at least for this project. I won’t tell you when or how “Wouldn’t It Be Nice” is played, but it will absolutely kill you.

Wilson has made millions of dollars and been widely acclaimed as one of pop music’s leading innovators, but as “Love & Mercy” makes clear his life has often been a troubled, strange and lonely one. He grew up in a nondescript southwestern suburb of Los Angeles – not all that close to the beach -- under the personal and musical tutelage of his abusive and demanding father, Murry Wilson (played here by Bill Camp). You don’t need to be Dr. Freud to see that Brian unwittingly replicated aspects of that relationship over and over in later life -- in his contentious collaboration with bandmate and cousin Mike Love (Jake Abel in the movie), which produced numerous classic pop hits, and then in the far less functional relationship with Landy, played here with sinister New Age fervor by Paul Giamatti.

Without getting into obscurantist rock-critic debates about Wilson’s variable output, his post-“Pet Sounds” career was unmistakably reshaped or derailed by the intermingled effects of drug abuse and mental illness. (By his own account, Wilson evinced symptoms of possible psychosis as early as 1963, the year “Surfin’ U.S.A.” first took the Beach Boys to the top of the charts.) It’s probably fair to say that “Love & Mercy” tries to package this exceedingly complicated story too neatly, as a deterministic fable about a man who is lost to madness and then redeemed by love. But then again this is a movie, not a critical biography – and a movie made with the collaboration of Wilson and his wife, Melinda, played in the film by Elizabeth Banks with a marvelous blend of polished ‘80s career-woman brass and vulnerability. I don’t imagine Mike Love – a fine pop craftsman in his own right, although not in Wilson’s class – will be overjoyed by his presentation here as a shameless, puritanical Philistine. But I’m not sure he’d expect anything else after all these years.

When you consider all the ways that “Love & Mercy” could have gone terribly wrong, and how full of life it is in the end (and, yes, of love and mercy), I think the end product is almost miraculous. Pohlad, who has helped produce such prominent indie films as “12 Years a Slave,” “The Tree of Life” and “Into the Wild,” was clearly paying attention along the way, because based on this project he is suddenly a director to be reckoned with. In telling the story of one damaged suburban genius and his unlikely rebirth, “Love & Mercy” captures the vanished possibilities of 1960s pop music, the fecklessness of the California dream and its decay into tragedy and madness, and other things less easy to describe or define.

D.H. Lawrence as a poet is no match for Brian Wilson as a songwriter, but “Song of a Man Who Has Come Through,” which seems to be about the mysterious nature of artistic creation and the fine line between genius and madness, is one of his better efforts. “Not I, not I, but the wind that blows through me!” it begins. Lawrence imagines yielding himself and being “borrowed/ By the fine, fine wind that takes its course through the chaos of the world/ Like a fine, an exquisite chisel, a wedge-blade inserted.” What you can hear coming through “Pet Sounds” and “Good Vibrations” and “Smile” and even some of the early Beach Boys hits is something like that, a wedge-blade that opens up an unexpected door. “What is the knocking on the door in the night?” Lawrence wonders at the end of the poem. He isn’t sure. “It is somebody who wants to do us harm. No, no, it is the three strange angels. Admit them, admit them.” Brian Wilson made the same choice.