"Dope": This provocative (and hilarious) black-nerd odyssey might be this year's perfect summer film

In this freewheeling and highly relevant summer comedy, a '90s-obsessed geek tries to escape the hood for Harvard 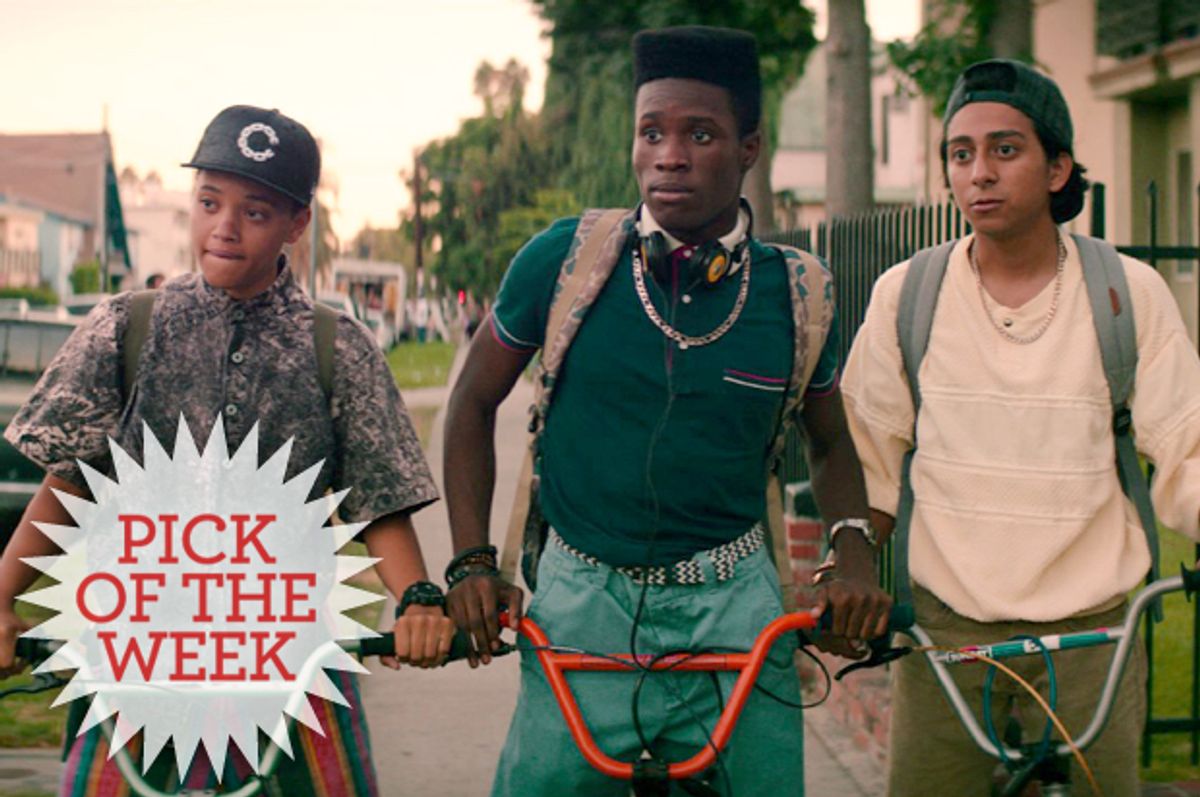 Malcolm (Shameik Moore), the teenage hero of writer and director Rick Famuyiwa’s shambling, agreeable Sundance hit “Dope,” is a classic figure straight out of 1990s African-American cinema. He’s growing up in a tough Los Angeles neighborhood (the Bottoms, in Inglewood), surrounded by gang violence and drug deals. He has a perfectly sculpted flattop and a collection of pristine Nike footwear, at least when the Bloods who persecute him at school don’t steal it. He loves Public Enemy, A Tribe Called Quest, Digital Underground and any number of less famous alt-rap acts. (At one point he and his friends buy the 12-inch single of “Rock Dis Funky Joint” by Poor Righteous Teachers – and as white-boy embarrassing as this is, I had that record!)

Except, wait – it’s only the ‘90s in Malcolm’s head, and in the obsessive yearnings of his band of misfits: A teen lesbian named Diggy (Kiersey Clemons) and a guy named Jib (Tony Revolori, from “The Grand Budapest Hotel”), who clearly isn’t black but whose precise ethnic origins are never explained. Is he Latino? Is he Arab? And why, as white hippie-hacker type Will Sherwood (Blake Anderson of “Workaholics”) wonders aloud, is Jib allowed to say the N-word when Will isn’t? Complicated question, am I right? And not one everyone will answer in the same way. (Paging Ms. Dolezal!) Malcolm says he doesn’t care whether Will says that word; Diggy pops him one every time he tries it. It’s not that she doesn’t like him, or thinks he’s a bigot. “It’s just instinct,” she shrugs.

“Dope” isn’t the perfect movie about the current state of African-American culture or anything, and isn’t trying to be. It has a goofy, shapeless, episodic quality that sometimes leads to moments of absurdist comedy and freewheeling brilliance and sometimes gets Famuyiwa mired in recycled clichés. The two beautiful young women who enter Malcolm’s life during his fateful senior year, hard-striving Nakia (Zoë Kravitz, the daughter of Lenny) and wild-child Lily (Chanel Iman), are undercooked and disappointing characters. But that hilarious and uncomfortable debate about when or if a non-black person can ever use the forbidden epithet that is used all the time between African-Americans captures why “Dope” may be the perfect movie for the summer of 2015.

To put it bluntly, Malcolm and his friends are hopeless nerds, a human subtype that scientists (laboring under their typical cultural bias) long believed did not exist within the African-American community. They get good grades and spend far too many of their Friday nights studying for the SAT. They do not do drugs, sell drugs or (embarrassingly) know the first thing about drugs. They have a terrible punk band called Awreeoh (sound it out) that sounds something like Bananarama and whose songs were written by Pharrell Williams, the avatar of black-nerd cool. But within this rollicking tale of Malcolm’s adventures on what he hopes is the path from Inglewood to the Ivy League -- a story that often feels like a Scott Pilgrim comic cross-bred with “House Party” and “Boyz n the Hood” -- Famuyiwa (previously the director of “The Wood,” “Brown Sugar” and “Our Family Wedding”) strikes a series of timely and important chords.

In the classic dichotomy of movies about life in the ‘hood, Malcolm is a “good kid” surrounded by a troubled world. But life is never that simple, whether you’re in Inglewood or Beverly Hills or Harvard Yard. As Malcolm discovers, the scary local drug dealer Dom (played by rapper A$ap Rocky) is as much of a ‘90s music geek as he is, and that isn’t where the similarities end. No doubt it’s stretching a point to compare David Simon’s epic race-and-crime TV drama “The Wire” to “Dope,” which features a viral video campaign for a new street drug known as Lily, including the meme-phrases “People on Lily Be Like” (that goes with a picture of someone taking a hilarious public pratfall) and “How’m I Spose to Eat My Pound Cake?” (that one goes with a gleeful or incredulous face). But they make similar points about the nature of success under capitalism, where the distinction between good and evil mostly involves what you can get away with.

Here’s the news flash embedded in “Dope,” which isn’t news at all but which white American society has great trouble absorbing: Black people are not all the same! The African-American community is not homogeneous or monolithic, and never has been! Not only that, dividing black people into categories like “criminals” and “people who follow the rules” is no better than believing that they’re all basically gold-grilled background extras in a Rick Ross video. Having Barack Obama and his family in the White House for the last six years has not produced a “post-racial society,” God knows, but it has thrust the diversity of black life into the nation’s cultural consciousness in a new way. In “Dope” – which, as the opening credits remind us, can mean a stupid person, illegal drugs or total awesomeness – Famuyiwa breaks this down to the individual level.

Malcolm doesn’t necessarily solve the underlying moral dilemma of “Dope” during his eventful senior year – but then, he doesn’t necessarily solve his virginity problem either. There’s a little bit of Mookie, Spike Lee’s character in “Do the Right Thing,” in Malcolm’s observer-participant role, and maybe also a little bit of that Prince of Denmark that white dude wrote about that one time. As one of those two guys observed, “there is nothing either good or bad, but thinking makes it so.” That’s precisely the conundrum Malcolm explores in his college-application essay, spoken aloud to the audience in Famuyiwa’s most effective frame-breaking moment. Then he does “The Humpty Dance,” which is dope, or possibly fresh – or at any rate provides a delightful ending to an exhilarating ride.