I was slimed by Gawker: In the worst year of my life, I became a regular target — and it was devastating

I've never stopped looking over my shoulder, wondering how or when I might again become an object of scorn 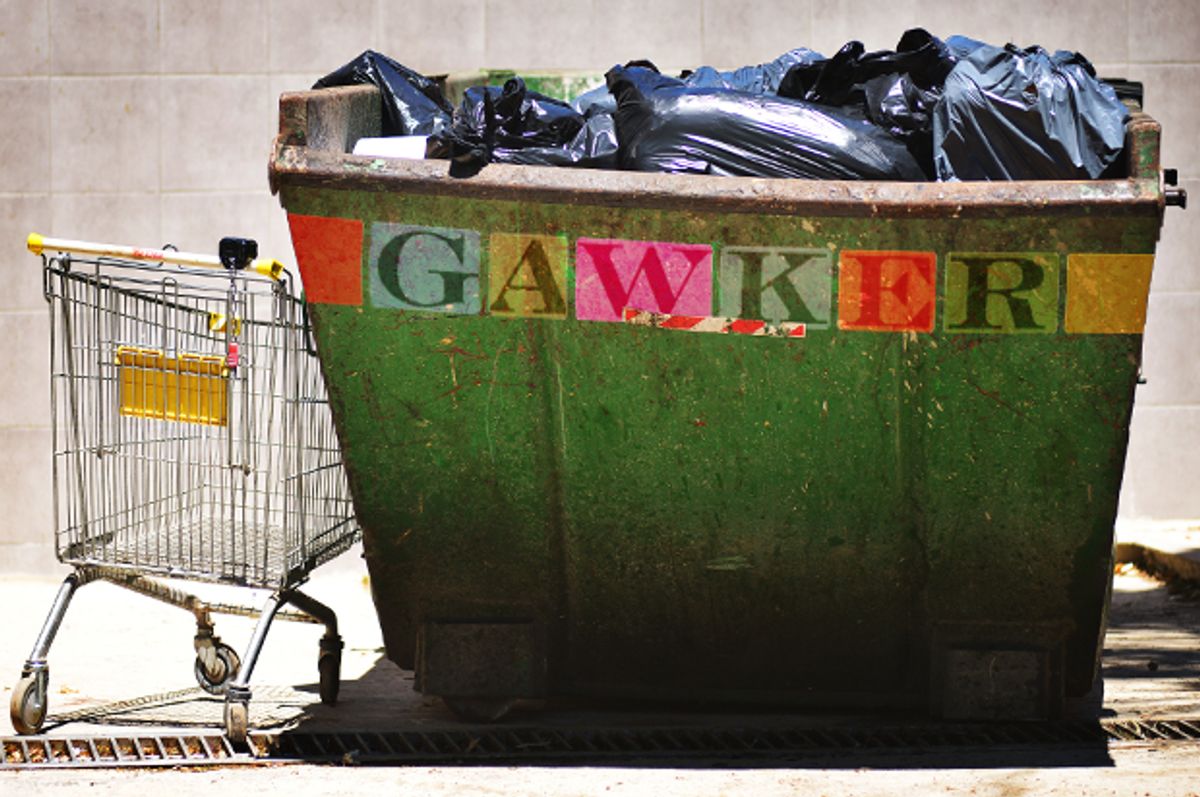 It was a bloop in IM from a colleague. "Oh god, I'm so sorry," it read. "And screw Gawker." It was an email a moment later, from my boss. "Just ignore it," it read. "It's not a big deal; they do this to everyone." That's when my heart lunged into my stomach. That was four years ago. That was the first time Gawker wrote about me.

The piece itself was relatively mild, on the Gawker spectrum. There were no intimate texts involved, there was no damning sex tape. I had simply been pronounced irksome because "She's against domestic violence. She's against harassing children. She's against elder abuse" — and I apparently expressed this in ways insufficiently nuanced for the writer. I was, in summation, declared "a first class hack."

I've been at this a very long time and been called worse by better, so it wasn't the piece itself that really got to me. It was the picture. It was an image of me, pale and freckled, that had run in Salon seven months before, when I shared that I had just been diagnosed with malignant melanoma. A photo that had been taken just a few days prior, one of my last remaining images of myself before I learned I was sick. It never appeared anywhere else. And now it was being used to make fun of me.

Still, it was relatively easy to put the hit piece behind me. My father-in-law was busy dying of cancer himself, and his brother had died a few days before, so I had my own stuff going on. Then a few months later, I was rediagnosed, this time at Stage 4. My cancer had metastasized into my lung and soft tissue, and I entered a Phase 1 clinical trial in the hopes of staving off a disease one of my doctors would later describe as "rapidly fatal." That fall, I wrote about the experience several times in Salon, along with my usual pop culture pieces. In December, I wrote multiple stories around the subject, including one about how my kids were facing the holidays after two deaths in the family and my own "full-blown late-stage melanoma." When the same Gawker writer tweeted out that day, "I have a joke for you: 'Why I Still Believe in Santa,' by Mary Elizabeth Williams," I braced myself. (I am not using the person's name, because you know what? This is about the Gawker culture, and because I have it on very good authority that publicly shaming individuals is an ass move.)

On the penultimate day of the year, I appeared on a Gawker list of people who should quit the media in the coming new year. In it, the writer described my style by noting, "Be sure to throw in some irrelevant tidbits about your personal life designed to short-circuit any criticism of your work in advance…. We're not being mean. We're being honest." The words appeared, again, next to the photo from my cancer story. This time, I cried. And you can laugh at me if you want, Gawker, but when you're actively in the midst of a grueling medical experience and uncertain how much time on earth you have, a cruel reference to your imagined fate for the coming year pretty much sucks.

Fortunately, I got better. Just a few weeks later, I was declared cancer free and I have been ever since. Gawker, meanwhile, continued to sputter at me, damningly referring to me as "polite mom" and "America's least necessary cultural critic," and taking umbrage that, as they put it, I'd written that "It's sad that MCA died." Of cancer. At least they stopped using my picture. And it's hard to take seriously an outlet that rages that your writing is "like sticking a needle full of SUPER SWEET SUGAR WATER in your veins."

But I entered a period of constant low-level dread nonetheless. I knew what happens to figures who become their popular targets, how they are perpetual low hanging fruit for a slow news day. Each time I filed a story, I wondered if it would be the subject of another scathing takedown, and what the fallout might be. "This is just how they are," my friends said, and some of them said it from experience. "It's what they do." In my world, it has long been understood that Gawker might today rip you to shreds. Just because. And this has been considered totally normal. So I avoided writing pieces critical of Gawker, for fear of retaliation. This went on for longer than I care to admit. For a company that claims to pride itself on freedom of expression, I wonder if they've ever considered the profoundly chilling effect their tactics have had on others. It's been a while now, but I have never stopped looking over my shoulder, wondering how I might again incite the outrage of Gawker, and what form that might take. It's a sickening feeling.

But they meanwhile apparently moved on to other imagined adversaries, because they stopped aiming at me. They went full fury over a friend who wrote a lighthearted Styles piece. They mocked another friend's cheerful enterprise for women enduring a stressful life experience. All because we — females in our 40s — had committed the crime of failing to entertain our youthful male media watchers.

And I am among the lucky ones. I didn't have my personal life dragged through the mud. When earlier this year, Jezebel — Jezebel! — used the Sony hack as an excuse to laughingly reveal Amy Pascal's Amazon orders and her "cheap, crotch-intensive beauty regimen," I cringed for the woman. She hadn't even, like me, directly offended the Gawker gods. She'd just ordered personal products on the Internet. Think about that the next time you do the same.

Then last week, while facing a lawsuit from Hulk Hogan over a sex tape, Gawker achieved peak Gawker when it ran a piece on a married media executive's attempt to procure a gay escort. The piece named the man, but not the escort, who had been rebuffed after attempting to get his potential client to exert political influence for him in a housing dispute. When the story was pulled the next day -- with a note that still referenced the man by name, by the way -- the staff expressed uniform anger over the deletion. And Monday, two top editors resigned, including Max Read, who'd previously defended the story by saying, "Given the chance gawker will always report on married c-suite executives of major media companies fucking around on their wives."

I've never worn my sickness as Teflon. I'm accepting of criticism of my work — and I've received a whole lot of it in my time, believe me. I've also had death threats and rape threats and Bill O'Reilly and a popular pair of shock jocks go after me, and I'm still here. But I do think it takes a special kind of mind-set to see a photograph that literally says "my cancer diagnosis" above it and go, "Yup, let's go with that one to trash her." A special mind-set to go after someone for "irrelevant tidbits about your personal life designed to short-circuit any criticism" while she's publicly writing about her inoperable disease and experimental treatment. A Gawker mind-set, if you will. I don't necessarily believe it's deliberately malicious. I think it's something scarier. I think it's just casually indifferent.

I know Gawker could easily target me again. They could find ex-lovers to reveal my kinks, former friends to share my greatest humiliations and darkest insecurities, classmates who know my most illicit and reckless deeds. I've got them all! And here's the thing — they can do it to you too. Not because you're Donald Trump or Antonin Scalia. I wasn't. That media executive wasn't. They can do it because they have the information and the inclination and blah blah blah truth. They can do it because they inflict pain without any sense that inflicting pain hurts people. And that's why I do not say this lightly — I've been through serious disease twice and two full years of a drug trial, and Gawker is still one of the most toxic things that ever happened in my life. I'm not being mean. I'm being honest.