You Must Hear This! Maxine Brown's "Stop" 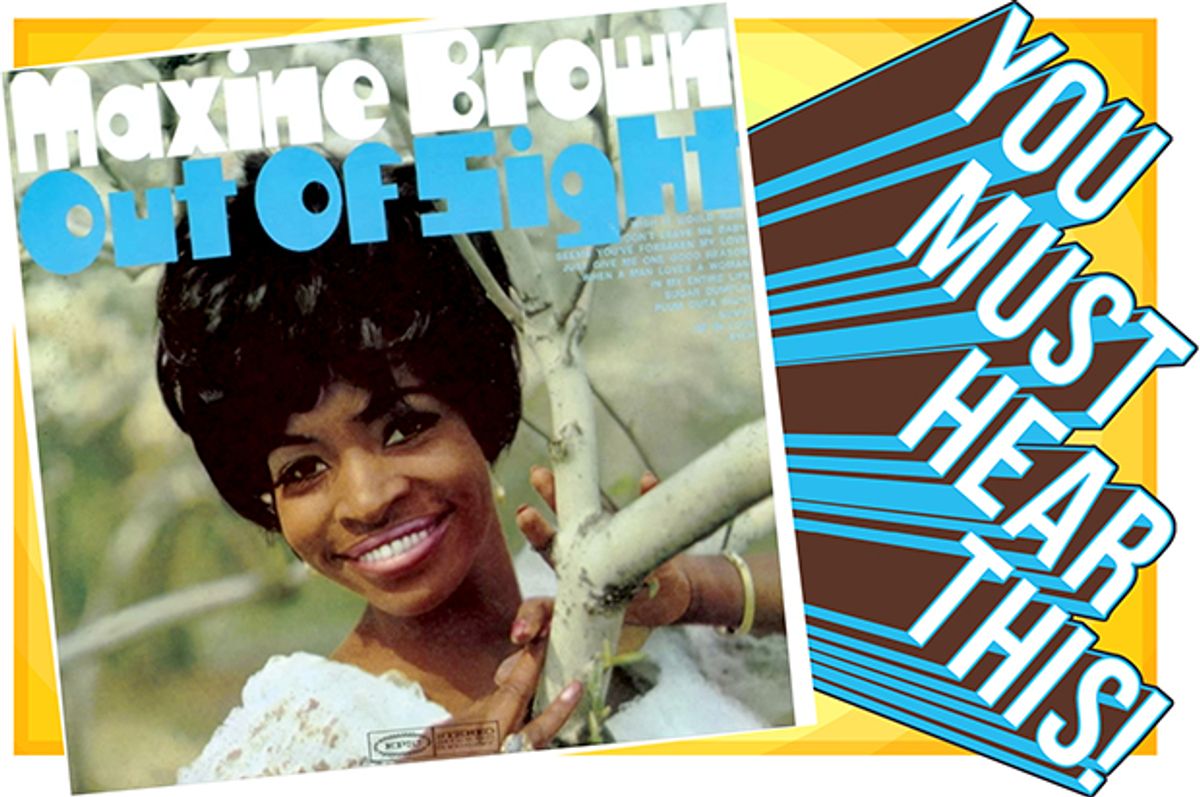 You Must Hear This! is a series that shines a light on overlooked songs that deserve a close listen. Click here to explore other articles in the series. This story has been corrected since it was originally published.

I loved this song even before it happened. Before I got to the moment that literally snapped my head back. The moment of vocal bravado that, while written into the song by legendary songwriters Jerry Ragovoy and Mort Shulman, is positively owned by Maxine Brown.

Push play, and the song wastes no time at all, opening mid-stride, at a gallop. It was produced by Mike Terry (again, as was this song), who managed to stack it deep with instruments without cluttering the sound. It is rollicking and fun, and then, thirty-six seconds in, Maxine hits the note and holds the note. At that point, the song becomes (for me at least) a game of anticipation – how long until she does that again?? She does it twice more, thankfully.

Other artists have recorded this song, including Howard Tate, who had a hit with it, and Jimi Hendrix. Oh, and The James Gang, of all things – they tacked a twelve-minute version onto the end of their first album. None of those artists hit that note like Maxine did, though:

Maxine Brown and I spoke on the phone, and the following has been edited for length and clarity:

The song I want to talk to you about is "Stop." It's kind of a deep cut, but I love it.

REALLY?! Nobody ever told me that! (laughs) Oh my god, that was Mike Terry, out of Detroit. I think he passed away. He produced that. Oh my god, and... You like that song??

I love that song!

Oh my god. I thought the song was so fast. It was just running away! But that's good – everybody has something they like, you know?

It just jumps out of the speakers.

Can you take me back to that time in your life and talk about what led up to that album?

Mike Terry was a very noted producer and arranger. He called the company, and they worked it out, and I went into Detroit to do this. While there, we got a lot of material. There were a couple of other songs that came out of that session. I think "I Wish It Would Rain" was on that, and there's a cute story about that one. Well... it's cute now, but it wasn't cute at the time. (laughs)

Mike Terry invited Norman Whitfield over to the session that he was cutting with me. And on the session was "I Wish It Would Rain," which was written by Norman – that's why he invited him. Norman came, and when he heard us do it, he said, "Oh, I never considered a girl for this! Wow!" Well, when that session was over, he went and called Gladys Knight, who was over at Motown at that moment. He gave it to her, and they cut it, and he had it in the street before mine got out.

Would that have been a single?

That would have been a single.

Tell me your memories about the recording session.

Mike Terry was a wonderful person, and a great arranger, and very creative. There were a lot of things I didn't like on the album, but I liked the way he worked. I liked working with him. It was just a nice session. I was put up in Detroit while I did the session, and then I went on back to New York. The company and everybody handled it after that – you know, you've got the biggies doing all that.

Were you there for the full sessions, or just for your vocals?

Oh no. When we recorded back then, thank God, they still had musicians come in and play for the session. Not like today, where you go in and you do the soundtrack. No, we did it live.

Everybody was there in the studio. That's something that I appreciated, because things started moving to where you start working to tracks. I loved it with the live musicians.

There's so much energy, and you're feeding off each other.

Yes! Yes! I love recording that old way. The only problem that had, in the day, is the separation. That's the difference of what they do today – the separations of sounds. But as far as getting the feeling of everyone being at the one session, it was just great, back then.

How long would it take to record a song?

Most times back then, we went into the studio with four songs, if it's a single. But if it's an album, you had to keep making dates to go back in. And again, with live musicians. You'd probably have a six or seven o'clock booking, and you're out of there by midnight.

Six or seven in the morning?

No, in the evening. Singers don't like to sing early in the morning. You'll catch us better at night. From seven pm on. We're night people, you know?

This album came out on Epic. Was that different from your previous label, Wand Records?

They didn't pay too much attention to it. They didn't concentrate on us over there. We kind of got lost in the shuffle. At least the R&B label, Wand, that I was on, with Florence Greenberg, at least they concentrated on us and tried to make us a stable, such as Motown. But a New York version of a Motown. When I went over to [Epic's parent company] Columbia, I was looking for great things, but they didn't concentrate on us too well. So that was the one and only album at the time.

Were you ever concerned about singing risqué material?

I get a bit creative when I'm in the studio! Those kind of lyrics, and what you'd call sexy ad-libs, I did that! (laughs) It's what pops in my head.

Van McCoy recorded me – Luther Vandross was on my session back then before he became Big Luther. I'm doing a song called "Make Love To Me," and so we're doing fine on the song, until I said one of those sexy things: "Make love to me, make love to me, do what you do best!" And the producer just fell off his chair. Just the inflection, the way I said it – it just came spontaneously, I didn't plan it. And the producers all looked at each other and said, "We can't let that go!" They ended up letting it go. Because it made sense! I kept it suggestive but I was never being naughty outright. It's just some of the things that pop in my head when I ad-lib like that!

Maxine Brown currently resides in New York City, and continues to perform in the United States and Europe.
Previously: