Angie and Brad's bad vacation: "By the Sea" is a bogus journey into imitation art cinema and bad '70s marriage

This brooding Brangelina vehicle is like a Lifetime weeper made by Antonioni. Is that the worst thing ever? 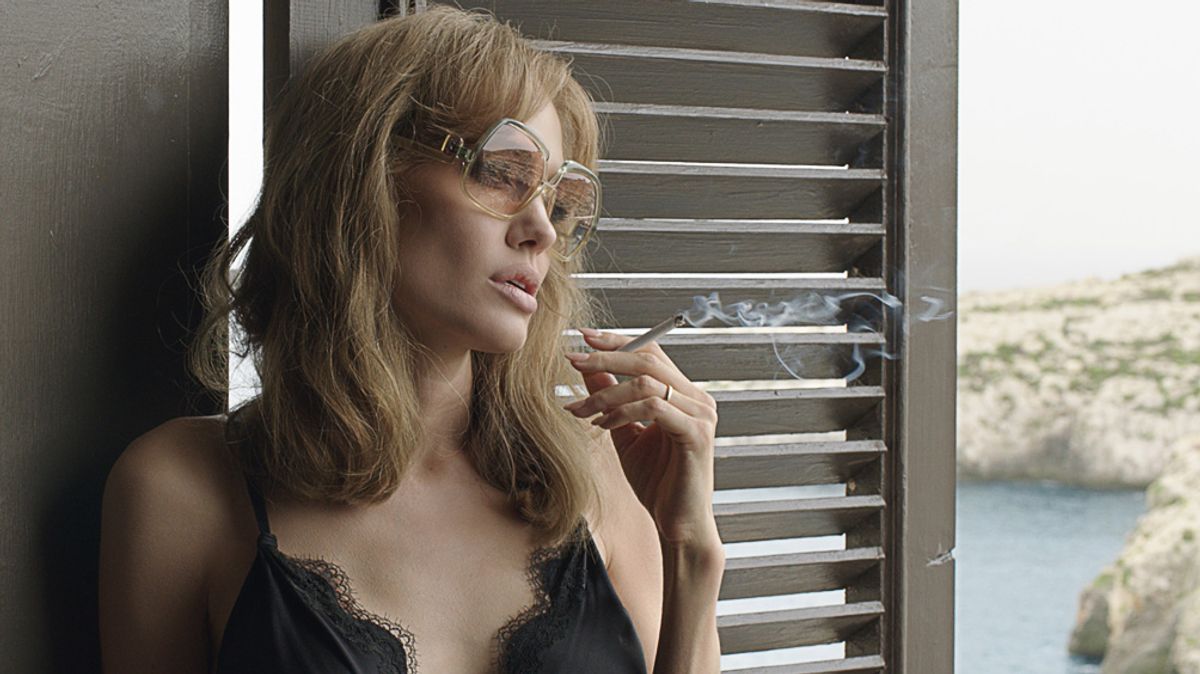 Angelina Jolie Pitt in "By the Sea" (Universal Pictures)
--

Presumably we should not hold it against Angelina Jolie Pitt and her husband that they are rich and famous and beautiful and very much in love. I mean, right? And the thing about their new film, “By the Sea,” which is one of the ultimate star vanity projects in Hollywood history – it was written and directed by Angelina, co-produced by her and Brad, and features the two of them as the moody, damaged principals in a bad 1970s marriage – is that you can feel the powerful emotion beneath its overly art-directed surface.

I wouldn’t describe “By the Sea” as a good movie, exactly, and the universe of people who will gladly pay $12 or $15 to see it and then leave contented is indescribably small. But whatever it is, it’s not a fake. It’s not “Gigli,” the legendary rom-com bomb that marked the end of Ben Affleck and Jennifer Lopez’s brief reign as dominant celebrity couple – and obliquely paved the way for Affleck’s Oscar-winning comeback with “Argo.” It’s not “Shanghai Surprise,” the 1986 flop in which Sean Penn played a roguish con man and Madonna played a missionary nurse in 1930s China. (No, I’m serious. From the marketing meetings: “Yeah, she’s basically Florence Nightingale -- but hot!”)

“By the Sea” has already received a critical pummeling that clearly has not concluded, and I’m all about joining in the fun. But in all fairness, that’s largely about factors extraneous to the film, such as the aforementioned wealth and gorgeousness and cluelessness of its creators. Because, simply considered as a movie – as a deeply peculiar movie with no obvious forebears or close relatives – well, what can I say? “By the Sea” has its moments. Moments of beauty, and moments of what feels like genuine introspection. Moments of stupid, innocent charm. Moments of love, and moments of perfume commercial. Quite a number of those, actually.

This is the third feature directed by Mrs. Jolie Pitt, and lest you think I am being an unbelievable ass, she is identified as such in the closing credits, where someone is listed as “assistant to Mrs. Jolie Pitt.” (That’s not likely to be an error, because first of all she is the director of the movie, and also because on the next line costar Mélanie Laurent’s sidekick is credited as “assistant to Ms. Laurent.”) All three movies are so different that one could reach various conclusions: Jolie Pitt is remarkably ambitious and eager to experiment with different settings, stories and approaches; she has no plan and is free-associating from one project to another; someone else is doing the heavy lifting and she is basically sticking her name on the finished project. I would bet that each of those propositions could be true to some degree.

After making a downbeat 1990s Balkan War drama almost entirely in Serbian and Bosnian (“In the Land of Blood and Honey”) and a ponderous World War II studio epic conspicuously aimed at Oscar gold, which it conspicuously failed to attract (“Unbroken”), Jolie Pitt has shifted to the war between the sexes, and a story she has said was inspired by her own parents. The result is something like a weepy Lifetime melodrama told in the languorous, self-indulgent style of European art cinema, as if Michelangelo Antonioni or Bernardo Bertolucci had wound up in debt to multiple ex-wives and were forced to churn out straight-to-cable movies, circa 1986. Those obvious visual and thematic influences to the entire "white people in hot weather" genre, which extend from “L’Avventura” to “The Sheltering Sky” to Anthony Minghella’s “The Talented Mr. Ripley” and Richard Linklater’s “Before Midnight,” may well have arrived by way of Austrian cinematographer Christian Berger, who has shot most of Michael Haneke’s films. But I’m entirely willing to believe that Jolie Pitt has watched some of those movies and absorbed them, after her own fashion; there’s a raw film-school enthusiasm beneath the phony sophistication of “By the Sea” that is intermittently semi-infectious.

Our writer-director plays Vanessa, a zoned-out, blow-dried American beauty approaching 40 with a strong Lauren Hutton affect: fashionable wardrobe, unapproachable demeanor, thick layers of mascara and eyeliner. It’s probably the summer of 1973; we overhear a French news broadcast discussing the Watergate scandal. Vanessa has accompanied her husband, Roland (that would be Mr. Jolie Pitt), a booze-addled, sub-Hemingway writer, to a desiccated and unfashionable resort village in the South of France. (Since the actual Côte d’Azur has largely been encrusted with concrete condo developments in the inimitable Mid-Late Brezhnev style, the film was shot on Malta.)

Not a whole heck of a lot happens. Roland and Vanessa drink a good deal, which makes them look only marginally less gorgeous. Pitt speaks a lot of French in the film, during Roland’s genial but tangential scenes with the obligatory wise and colorful local bartender, pretty nearly made to seem like a real person by terrific French character actor Niels Arestrup. While it does feel kind of show-offy – look how far this kid from Shawnee, Oklahoma, has come! – I have to admit Brad sells it pretty well. Vanessa pops pills and refuses to have sex with Roland, suggesting that he might instead like to tackle Lea (Laurent), the attractive and frequently topless young French woman next door. She kinda wants him to screw Lea and kinda doesn’t; there’s an underlying trauma in their marriage that you will guess at right away and then conclude, “No way, that’s too simple.” It’s not.

In any event, once Roland and Vanessa discover that there’s a peephole between the two rooms, and they get to watch Lea and her equally hot new husband, François (French sex symbol Melvil Poupaud), vigorously try to make babies, they at last have an activity they can share. That stuff is all pretty grating, and you have to wonder whether Jolie Pitt has anyone around her who can give honest screenplay feedback, e.g., that literally making an estranged couple into sexual voyeurs is the kind of writerly overkill Vladimir Nabokov called “a telegram from Vienna.” Indeed, in general the supposed plot of “By the Sea” is much dumber than the parts of the film that are purely visual or pure vibe: Pitt and Arestrup idly shooting the breeze over glasses of pastis, or Jolie Pitt gloomily wandering the cliffs in her impeccably chosen wardrobe (by which I mean clothes marginally less cool than those Jolie Pitt herself would wear in real life), debating whether or not to fling herself into the sea, Zelda Fitzgerald-style.

You are free to conclude that this particular Brangelina artifact is a sub-mediocre imitation art movie that has no particular reason to exist, and that there’s no excuse for these rich and privileged celebrities getting to play out their psychodrama in such a self-indulgent fashion. Or you could conclude that Brad and Angie spent $10 million, which they might otherwise have blown on a weekend getaway for the family, on employing Arestrup and Laurent and Poupaud and Berger and other grade-A European film talent, and that no wild horses were harmed in the process. There is pretty much no precedent for Jolie Pitt’s attempt to emulate the Clint Eastwood path, and turn herself into a major director after a career as a leading female star. I can see no clear indication that she will succeed. But honestly, what the hell? You gotta love her for trying.