The anti-Guy Fieri bows out: "Cook's Illustrated" won't be the same without Christopher Kimball 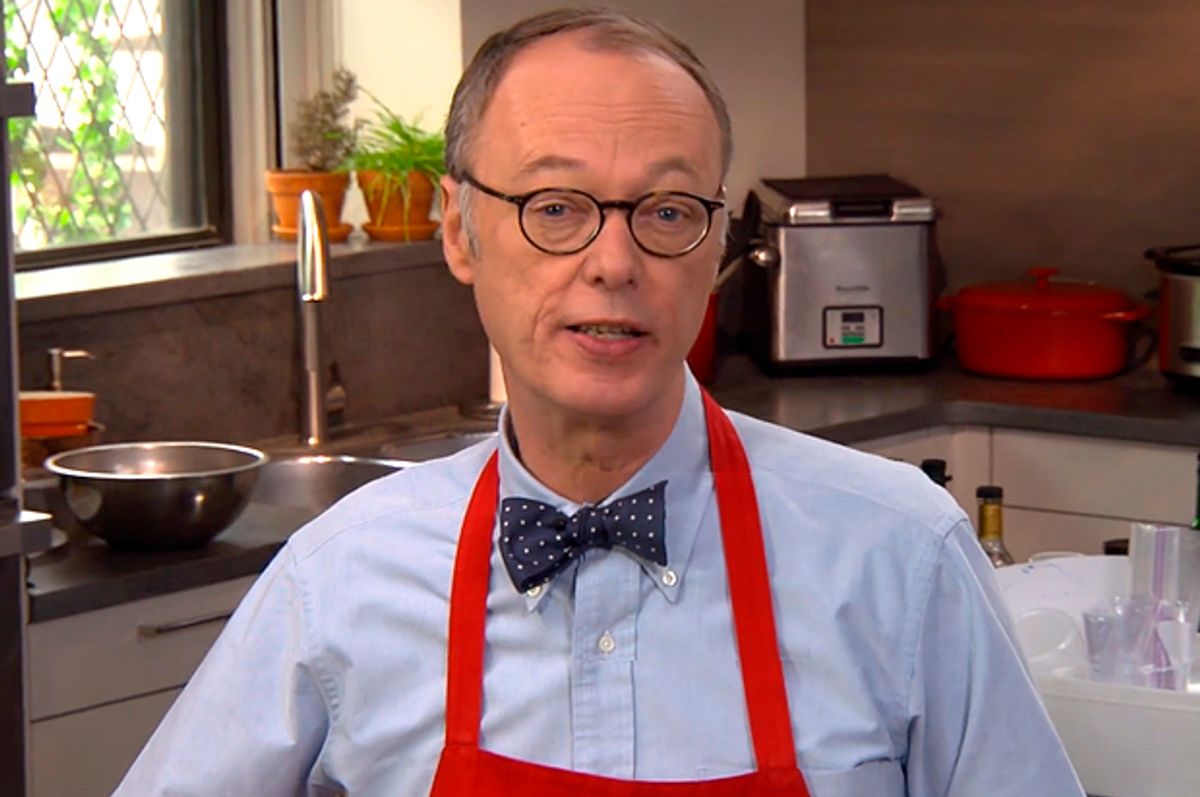 In a move that sent shockwaves through the PBS-subscribing, why-yes-I-do-have-strong-feelings-about-pineapple-in-carrot-cake cognoscenti, America’s Test Kitchen announced Monday that Cook's Illustrated founder and the brand's most identifiable personality, Christopher Kimball, is leaving the organization. The announcement left many fans bereft and confused, like when you're doing the mise en place and suddenly realize you don't have any kaffir lime leaves.

The internal announcement from Boston Common Press chief executive David Nussbaum was brief but pulled no punches, stating, "As you all know, for many months now members of the Board of Boston Common Press have been negotiating with Chris Kimball, hoping that he would continue to play a highly-valued public role for America’s Test Kitchen. He was asked to stay with the company and focus his talents on creativity, on-air presence and in-person appearances. Despite our interest in having him stay and after negotiating with him in good faith for many months, he ultimately rejected that approach. We are disappointed that he has chosen a new path, but we respect his choice. While he will remain a minority owner of the company, he will no longer play a role at ATK."

The Boston Globe reports that "Kimball, 64, may be planning to start a new venture, according to people who know him." But what of "America's Test Kitchen?" What will it be like when he leaves at the end of the 2016 season; how will it thrive without its bow-tied overlord making pronouncements about box graters? What will Cook's Illustrated be without the folksy letters from the editor, full of pig roasts and taciturn New Englanders?

For more than twenty years, Cook's Illustrated -- the forerunner of "ATC" -- has held held a unique place in the heart of home cooks. The magazine, with its heavy paper stock, old-fashioned illustrations and no ads or restaurant talk, treats the composition of each dish as a noble and pure quest. Recipes revolve around storytelling, a kind of knights of the round table adventure in which different players must be assembled and either rejected or accepted. Butter or lard? Apple cider vinegar or lemon juice? WHO SHALL BE CHOSEN?

But what also sets Cook's Illustrated apart is its Kazuo Ishiguro-level restraint. The ultimate result should not blow your doors off. It must be garlicky but not too garlicky, cheesy but not too cheesy. Speaking with the New York Times in 2012, Kimball laid out his philosophy, stating, "I hate the idea that cooking should be a celebration or a party. Cooking is about putting food on the table night after night, and there isn’t anything glamorous about it." No BAM. No YUMMO.  Basically, imagine the opposite of Guy Fieri and you get the tone. You will not see a Christopher Kimball-themed restaurant in Times Square, dishing out sensible portions of mashed potatoes.

I confess that in recent years my relationship with the Kimball empire has become more sporadic. Somewhere along the way, I'd reached a point where the plots of every recipe began to feel formulaic, like later years episodes of "Law and Order." I get it — you set out to make a dish neither too soggy nor dense and it turned out, in a shocking twist, that the secret was melba toast crumbs. (Melba toast crumbs are the glib psychopath of breading.) And at heart I am more of an American than a New Englander, and as I have come into my own as a home cook I've found myself questioning the Kimball brand's authority. Oh, you want to make a cookie that's not "too" chocolatey? You're not the boss of me! A Cook's Illustrated or America's Test Kitchen or Cook's Country recipe will feed and feed you well, but it will likely not haunt you. It will not make you moan in ecstasy at the dinner table, because such behavior is undignified. But it has its place at the table just the same.

Sites like the wonderful Food52 rely on the community approach to cooking, while the cult of culinary celebrity belongs now to the biggest and the loudest voice in the room. (Usually Gordon Ramsay.) Without Kimball at the center of things, without his iconic, fussy presence in the kitchen, it will be interesting to see how the personality of the brand shifts. But it's a good bet wherever things go from here, we are probably still safe from any recipes that involve the word "screaming."