The GOP's devious Wall Street welfare plan: Why the future of the economy hangs in the balance 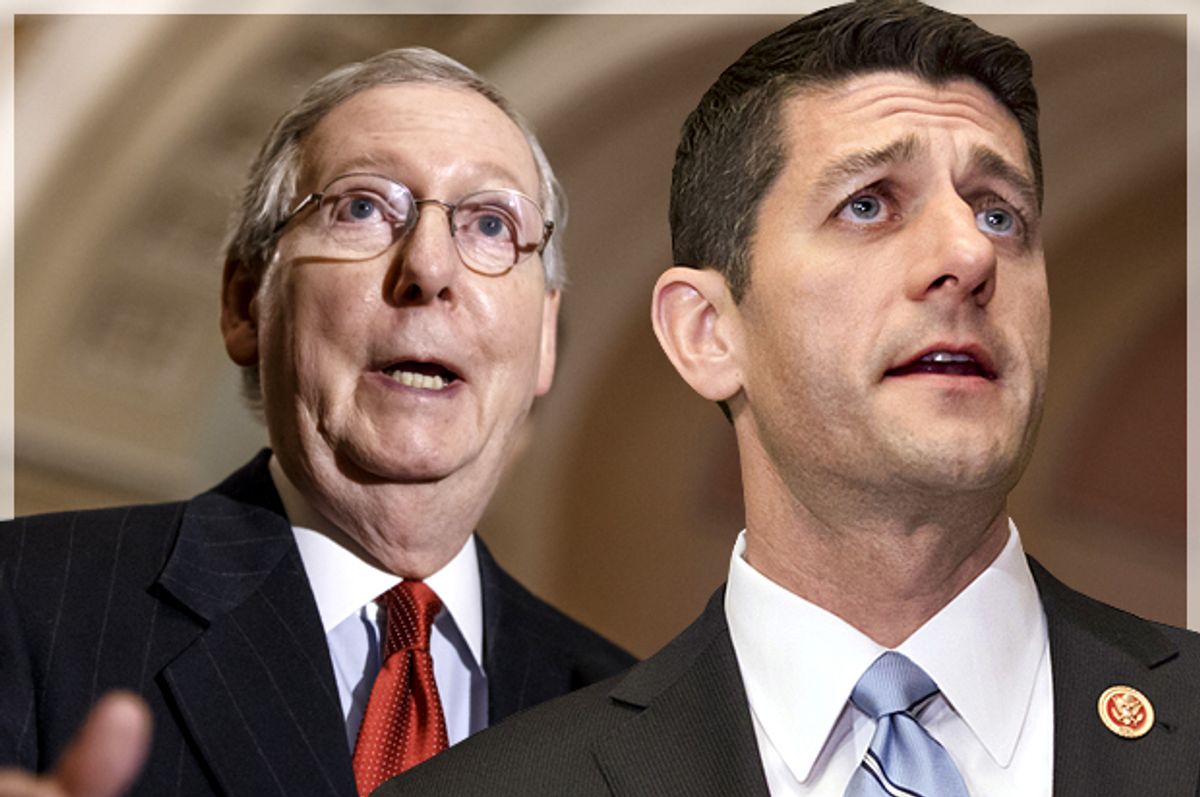 You wouldn’t know it, but this is a consequential week for the future of financial regulation, and in a larger sense, the future of the economy. Republicans have pulled out a successful playbook, and are planning an assault on Wall Street regulations. They’re doing it with the avowed support of a lingering faction of conservative Democrats. And the level of that support, which will be tested in House votes this week, is key to the success of the plan.

The game plan is simple: stick as many riders onto two must-pass bills as possible, holding them hostage to conservative ideology. The bills include a long-term reauthorization of the Highway Trust Fund, which expires shortly, and a package of appropriations bills to keep the government funded, which have a deadline of December 11. Even if the Obama Administration forces some riders out, plenty of other policies would pass into law that would never have a shot on a straight-up vote.
The highway bill has already passed the House and Senate and needs to get through a conference committee.Congress looks set to pass a two-week patch to finalize the conference, but the deadline is fast approaching. The House version has a series of goodies for Wall Street attached, including a package of 15 bills that loosen minor rules. The White House’s Statement of Administration Policy on the House bill makes no mention of the financial services package, suggesting that it wouldn’t be a deal-killer. So conferees have a free hand to insert that into the final bill.

I think of this way: When you want to unclog a pipeline, you send down what they call a “pig” to clear the way for the flow of oil. This financial services package is the pig in the pipeline, testing the system and proving the hostage-taking concept. It’ll make it easier for the flood that Republicans have cooked up for the year-end appropriations bills.

This includes attacks on the Consumer Financial Protection Bureau (CFPB), the subject of a memorably bizarre ad during last week’s GOP debate. Republicans want to change the leadership structure to a five-member panel (the better to insert friendly regulators into the decision-making process) and put the agency’s budget into the appropriations process (the better to gut agency resources). The President of the American Action Network, who funded the ad, admitted that he wants to stop the CFPB from regulating mandatory arbitration clauses in consumer contracts, to use one example.

Republicans have other aims, as well. They want to exempt some mid-size banks from annual “stress tests” that gauge their resilience in a crisis. They want to raise the asset threshold for automatically labeling a “systemically important financial institution” (SIFI) from $50 billion to $500 billion, giving big firms relief from expanded regulation under Dodd-Frank. They would also give existing SIFIs ways to wiggle out of the designation.

Another idea gives banks a loophole to avoid CFPB’s “qualified mortgage” (QM) rules, legal protections for borrowers against loans with high upfront fees, balloon payments or other nontraditional features. As long as the bank holds the mortgage in their own portfolio, they would not be subject to QM. This sounds deceptively sensible, given the role of securitization in the crisis. But if banks can structure loans with high upfront fees and make their profits on the front side without any legal risks, they can peddle bad loans to borrowers and ignore the underlying loan quality.

On the Senate side, Elizabeth Warren has already rung the alarm on the active participation in this strategy from conservative Democrats Joe Donnelly, Heidi Heitkamp, and Jon Tester. Senate Banking Committee Chairman Richard Shelby met with those three last week to determine how many of these ideas he can stuff into the appropriations package. Donnelly told the Wall Street Journal “common ground exists” for such maneuvers. The meetings don’t include Sherrod Brown, the ranking member of the committee.

Shelby has an existing “financial regulatory relief” bill that includes lower standards for community banks and credit unions, but combines them with these long-sought rollbacks. He needs only five Democrats for a filibuster-proof majority. “We're negotiating to try to figure out as much stuff as we can get done,” said Republican Senator John Boozman, who chairs the appropriations subcommittee on financial services.

Whether Democrats side with Shelby could hinge on a couple votes this week in the House. The “qualified mortgage” bill, H.R. 1210, is on the schedule. So is another bill, H.R. 1737, which would repeal CFPB’s efforts to end racist auto lending. CFPB issued a guidance enabling them to go after banks that fund car loans where dealers charge higher markups to African-Americans and Hispanics. H.R. 1737 would repeal that guidance. Moreover, it would dictate to CFPB what it can and cannot regulate, setting a dangerous precedent.

The House votes are for show, to gauge the level of support for the appropriations gambit. If dozens of House Democrats support the bills, Wall Street’s hand will be strengthened. Given the bipartisan support, Shelby could persuade his Democratic friends to support his entire suite of deregulation.

H.R. 1737 got 13 Democratic votes in the Financial Services Committee, against only 9 Democrats in opposition. H.R. 1210 got only four supportive Democrats. But that rump faction of pro-Wall Street Democrats – including Kyrsten Sinema, John Delaney, Ed Perlmutter and David Scott, who supported both bills in committee – will surely whip additional support from the rank and file, eager to please their financial sector contributors.

If this all sounds familiar, it’s because the Republicans used precisely the same tactic last year. In the 2014 “CRomnibus” spending bill, conveniently timed around the holidays when nobody pays any attention to Washington, Congress passed and President Obama signed a repeal of derivatives rules enshrined in Dodd-Frank. Citigroup lobbyists actually wrote the repeal legislation. Warren and Rep. Elijah Cummings last week released a report finding that this led to $10 trillion in derivatives trades staying on the balance sheets of the largest banks, increasing systemic risk.

The White House’s role is crucial here. In public, the President has demanded no riders on the appropriations bills. But last year’s signing of the Dodd-Frank rollback shows how such demands can be malleable. “We are open to discussions about things that are truly technical, but we are very much opposed to anything that would undermine any of the core architecture of Dodd-Frank,” said Treasury Secretary Jack Lew last week. But the White House and the financial reform community may draw that line differently.

The worst outcome would be a kind of horse-trading, where the White House accepts some deregulation in exchange for shielding of others. For example, Republicans have a rider canceling the Department of Labor’s proposed rule to force investment advisors to act in their clients’ best interest. Would the Administration give up CFPB authority or expanded bank regulation in exchange for protecting the Labor rule?

We know that stronger rules for consumer protection and financial stability help safeguard the U.S. economy. These rollbacks represent a threat, hearkening back to decades of bipartisan deregulation that ushered in the 2008 financial crisis. Will Democrats hand over a free pass to Wall Street in the hopes of a few campaign donations? Will the Obama Administration make a distasteful choice over what parts of the financial sector to make riskier? Will the Warren wing’s clout mean anything? Stay tuned.