Republicans are about to start raving about the spending again. Here's why you shouldn't take them seriously 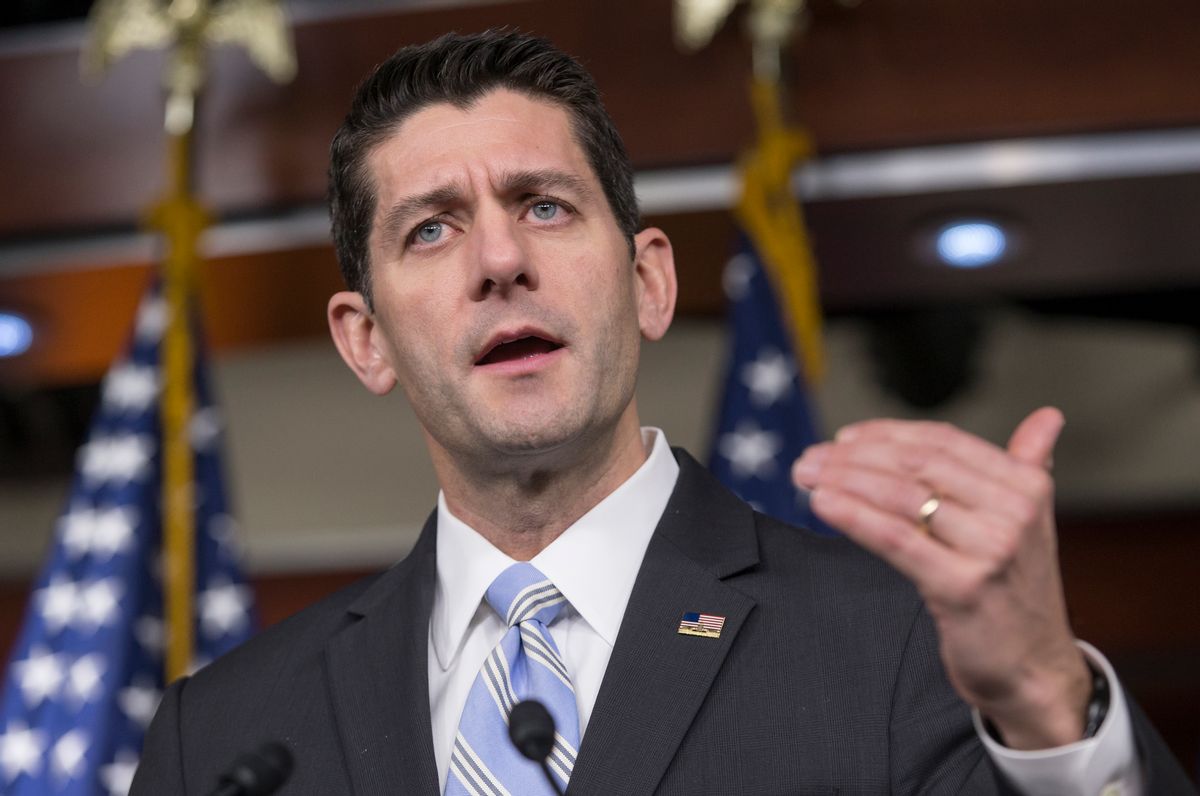 We’re going to start hearing about the deficit again, after a long absence from the political stage. That’s in part because a Democrat might get elected president again – perhaps even on a platform endorsing substantial new federal spending. In the face of that potentially harrowing scenario, government’s willing saboteurs must devise a way to persuade voters to reject those proposals, by spinning terrifying tales of out-of-control debt and intractable burdens for children and grandchildren. For them, deficit fearmongering admirably serves this goal.

Incidentally, while you were busy not hearing about it, the deficit has fallen for the past six years, at the most precipitous rate since the end of World War II. It’s a problem that the deficit dropped so fast, in fact, because we got there mostly through government austerity that has dragged on economic growth since the middle of 2010, contributing not only to the sluggish recovery, but also to deprivations in vital services for the needy.

Just before the election year, Congress made a bunch of changes to boost that deficit back up. The intentions of this were three-fold: 1) reward campaign contributors with tax breaks that go mostly to business; 2) hope that running deficits will feed back into economic growth and protect incumbents seeking re-election; and 3) secure a misleading talking point about irresponsible runaway debt in Obama’s last year in office.

The Congressional Budget Office’s (CBO) outlook for fiscal year 2016, released yesterday, does yeoman service at realizing goal number 3. “In 2016, the federal budget deficit will increase,” CBO intones, and “if current laws generally remain unchanged, the deficit would grow over the next 10 years, and by 2026 it would be considerably larger than its average over the past 50 years.” With this information, the scolds can pull off a neat trick: raise the deficit and then scream about the consequences of raising the deficit.

Over 40 percent of this increase, $43 billion, is due to a statistical quirk, CBO explains. The federal fiscal year goes not by the calendar, but from October 1 to September 30. October 1, 2016 happens to fall on a Saturday, meaning that federal payments that normally go out on the 1st of the month will instead get delivered the Friday before. That puts those $43 billion in monthly payments in the 2016 fiscal year instead of 2017, “increasing” the 2016 deficit.

Quick idea for lawmakers: Pass a bill moving the October payments from Friday to Monday, and instantly cut the current-year budget deficit increase by over 40 percent! (This is not as far-fetched as it sounds: California actually balanced their budget a few years back with a version of this gimmick.)

The rest of the deficit comes from the aforementioned legislation – in particular, the 2016 budget, which increases spending modestly above sequestration caps, and the “tax extenders” bill, which made a host of tax cuts, mostly to corporations, permanent. Republicans were eager to deliver these tax cuts to businesses last year, but will likely spend the better part of this year moaning about the surge in the deficit those business tax cuts created.

Keep in mind that the relatively trivial 2016 deficit increase – around 0.56 percent of GDP – does precious little to the long-term picture, which has far more to do with inflation, interest rates, and the cost of medical care. Increased spending from lifting the sequestration caps could even boost the economy slightly, and the knock-on effects of that, particularly if it leads to more employment, could increase federal tax revenues and bring down the deficit. The one durable cure for deficits has never been fiscal austerity, but full employment.

Unfortunately, handing out a bunch of tax cuts that mostly flow to businesses probably won’t help the economy much, as money saved by those corporations may not be spent. But especially since these permanent tax breaks were permanent-in-everything-but-name before this point, habitually passed year after year, any deficit hysteria resulting from their passage is pretty cynical.

CBO plays into deficit fears by projecting an unsustainable rise in deficits year after year, all the way to $1.36 trillion in 2026, the last year shown. Surely we’ll hear plenty about “$9 trillion added to the national debt” and “the largest debt as a percentage of GDP since the 1940s.”

To be honest, these projections are about as scientific as seeing a picture of Jesus Christ on your toast. (See if you can find the Great Recession in any CBO report before 2008.) But the overall problem with worrying about these issues is that none of the people doing the worrying actually want to commit to any solution. If the problem is insufficient tax revenue, then we could raise taxes on those who can most afford it. But that’s simply off the table. If the problem is an aging population, allowing a greater influx of young people from abroad and bringing the shadow economy on the books fits the bill. But that can never happen either.

Let’s be perfectly clear: runaway federal spending is not the problem. Even with the modest increases this year, the government operates under an artificial and restrictive spending cap, which has reduced discretionary spending to its lowest level of the postwar era. Public investment as a percentage of GDP has been gutted. This investment has historically been what has expanded economic growth; today it’s been crowded out to the verge of extinction.

The real intention of deficit hysteria is to stick a knife in any effort to expand the welfare state, to use “we can’t afford it” as an easy riposte to plans for debt-free college or paid family leave or expanded Social Security. If a Democrat reaches the White House next year, he or she will have to face down this nonsense all over again. But it has no credibility as anything but a political weapon.

People don’t care anymore about the deficit, at least relative to the economy and jobs. Congress by its actions in December showed it didn’t care, either. And that’s OK – there’s not much reason to care about “the deficit” in and of itself, relative to caring how to keep health costs down or ensure that everyone can find a job. We have plenty of problems in America. The precise level of debt load isn’t one of them.