The 10 most ghoulish quotes of Henry Kissinger's gruesome career

Nixon's security adviser was ready to kill "anything that moves" in Cambodia. This is whom Hillary calls a mentor 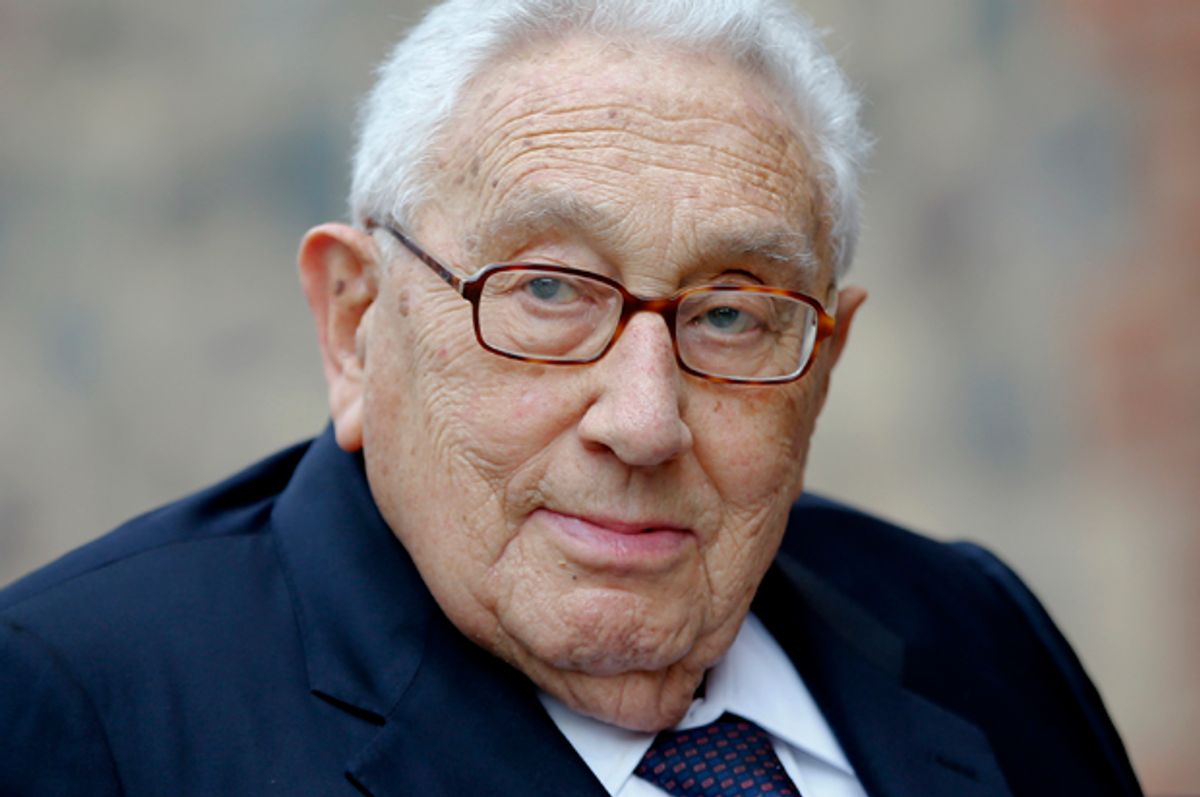 Henry Kissinger's quote released by Wikileaks, "The illegal we do immediately; the unconstitutional takes a little longer," likely brought a smile to his legions of elite media, government, corporate and high society admirers. Oh that Henry! That rapier wit! That trademark insouciance! It is unlikely, however, that the descendants of his more than 6 million victims in Indochina, and Americans of conscience appalled by his murder of non-Americans, will share in the amusement. His illegal and unconstitutional actions had real-world consequences: the ruined lives of millions of Indochinese innocents in a new form of secret, automated U.S. executive warfare. (Read Branfman's extended related essay on Kissinger.)

Kissinger has a history of saying outrageous things that reveal a dark callousness and hostility to the lives of innocent civilians. Here's a sampling:

2. Bombing Cambodia: “[Nixon] wants a massive bombing campaign in Cambodia. He doesn't want to hear anything about it. It's an order, to be done. Anything that flies or anything that moves.” (link)

3. Bombing Vietnam: "It's wave after wave of planes. You see, they can't see the B-52 and they dropped a million pounds of bombs ... I bet you we will have had more planes over there in one day than Johnson had in a month ... each plane can carry about 10 times the load of World War II plane could carry."  (link)

4. Khmer Rouge: “How many people did (Khmer Rouge Foreign Minister Ieng Sary) kill? Tens of thousands? You should tell the Cambodians (i.e., Khmer Rouge) that we will be friends with them. They are murderous thugs, but we won’t let that stand in the way. We are prepared to improve relations with them. Tell them the latter part, but don’t tell them what I said before.” (Nov. 26, 1975 meeting with Thai foreign minister)

5. Dan Ellsberg: “Because that son-of-a-bitch—First of all, I would expect—I know him well—I am sure he has some more information---I would bet that he has more information that he’s saving for the trial.  Examples of American war crimes that triggered him into it…It’s the way he’d operate….Because he is a despicable bastard.” (Oval Office tape, July 27, 1971)

7. Assassination:  “It is an act of insanity and national humiliation to have a law prohibiting the President from ordering assassination.” (Statement at a National Security Council meeting, 1975)

8. Chile: “I don't see why we need to stand by and watch a country go communist due to the irresponsibility of its people. The issues are much too important for the Chilean voters to be left to decide for themselves.” (link)

9. Illegality-Unconstitutionality: “The illegal we do immediately. The unconstitutional takes a little longer.” (from March 10, 1975 meeting with Turkish foreign minister Melih Esenbel in Ankara, Turkey)

10. On His Own Character: “Americans like the cowboy … who rides all alone into the town, the village, with his horse and nothing else … This amazing, romantic character suits me precisely because to be alone has always been part of my style or, if you like, my technique.” (November 1972 interview with Oriana Fallaci)