Leave David Letterman alone: For a celebrity, “showing his age” means aging in public at all 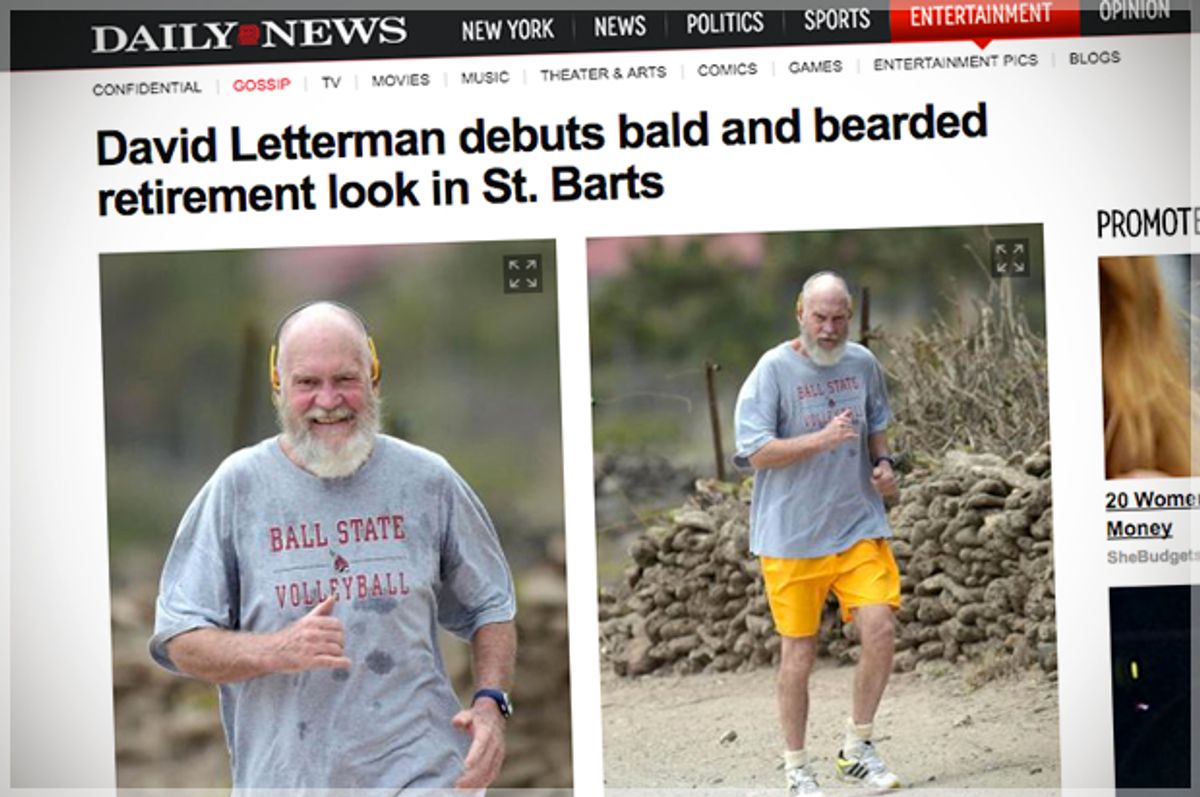 If there is a hell, surely there is a special place in it for the tabloid hacks who bring us the "___ doesn't look like this any more" stories that report, with shock, that a celebrity has not been immune to the passage of time. The latest victim? David Letterman.

It's been nearly a year since the 68 year-old stepped down from his perch as the host of "Late Show." Since then he's apparently been enjoying his new status as a retiree, with occasional brief forays back into the public eye. Back in September, he blew the paparazzi's collective mind by appearing — in the words of the New York Post — "looking like a bedraggled Tom Hanks in 'Cast Away'" with a "hobo chic" fluffy gray beard. In December, he spoke to Montana's "Whitefish Review" about his new life, and said decisively, "I had to shave every day, every day, for 33 years. And even before that when I was working on local TV. And I just thought, the first thing I will do when I am not on TV is stop shaving…. I've kind of developed a real creepy look with it that I'm sort of enjoying. And I can tell that people are off-put by it. And the more people implore me to shave, the stronger my resolve is to not shave."

You hear that? Dave does not care.

And he admitted, "I’ll be 69 next year and I’ve been doing this for 33 years. What did I want? Like you work until you’re a hundred? So there’s a lot of practical reasons why a person wouldn’t miss this." You hear that, too? Dave's doing just fine.

Yet on Wednesday, the New York Daily News eagerly ran a duo of photos of the former host, looking "nearly unrecognizable" out on a run during a vacation in St. Barts. Decked in yellow shorts and a sweat-marked t-shirt from his alma mater, Ball State, Letterman was also still sporting his full beard — and not much hair on top. Or as the Daily News put it, the man was "really showing his age." Other sites also picked up on the news, with the Daily Mail deploying its favorite word to note that "David Letterman reveals bald head while in St Barts" — like a bald head is a nip slip — and both Extra and Us boggling that Letterman is "completely unrecognizable." At least E! noted that he's "Balding, Bearded and Looking as Happy as Ever in St. Barts."

Despite the fact that aging happens to literally everyone except Angela Bassett, the idea that a well-known face would grow older and change in appearance is somehow routinely treated as a shocking bit of news. God forbid the person also gain weight or lose hair. Last fall, Carrie Fisher, who once famously said that "I swear when I was shooting those films I never realized I was signing an invisible contract to stay looking the exact same way for the rest of my existence," confirmed that for the new "Star Wars," "They didn’t hire me, they hired me minus 35 pounds." And when, five years ago, Sinead O'Connor appeared at an Irish music festival looking different than she did in her twenty years prior "Nothing Compares 2 U" days, headlines proclaimed the news she was "no longer bald or skinny."

Last year, the Daily Mail ran a feature on celebrities who've "aged badly" — by, you know, aging at all. The Daily News did one too, in which they managed to criticize a handful of stars like Nick Nolte for apparently growing older naturally while slamming others for "messing with" their faces. The 53 year-old Charles Barkley, meanwhile, earned a "Wowza!" for no longer being at his NBA playing peak.

David Letterman doesn't need anybody to stick up for him. He looks like he's having fun, after giving his entire adult life to entertaining the rest of us. And we should all be lucky enough to one day to spend some retirement time jogging around a tropical island, with zero interest in being held up to the aesthetic standards of our working years prime. In his Whitefish Review interview last year, Letterman said, "I know I’ve grown old. But I don’t think I’ve grown up." He's grown up just fine. It's the people who snark about an adult man "showing his age" who could use a lesson in maturity.