GOOP is "Jackass" for rich women: Gwyneth reveals "I've been stung by bees" — on purpose — like it's no big deal

In a new NYTimes column, Paltrow reveals how game she is for extreme thrills—in the name of health, of course 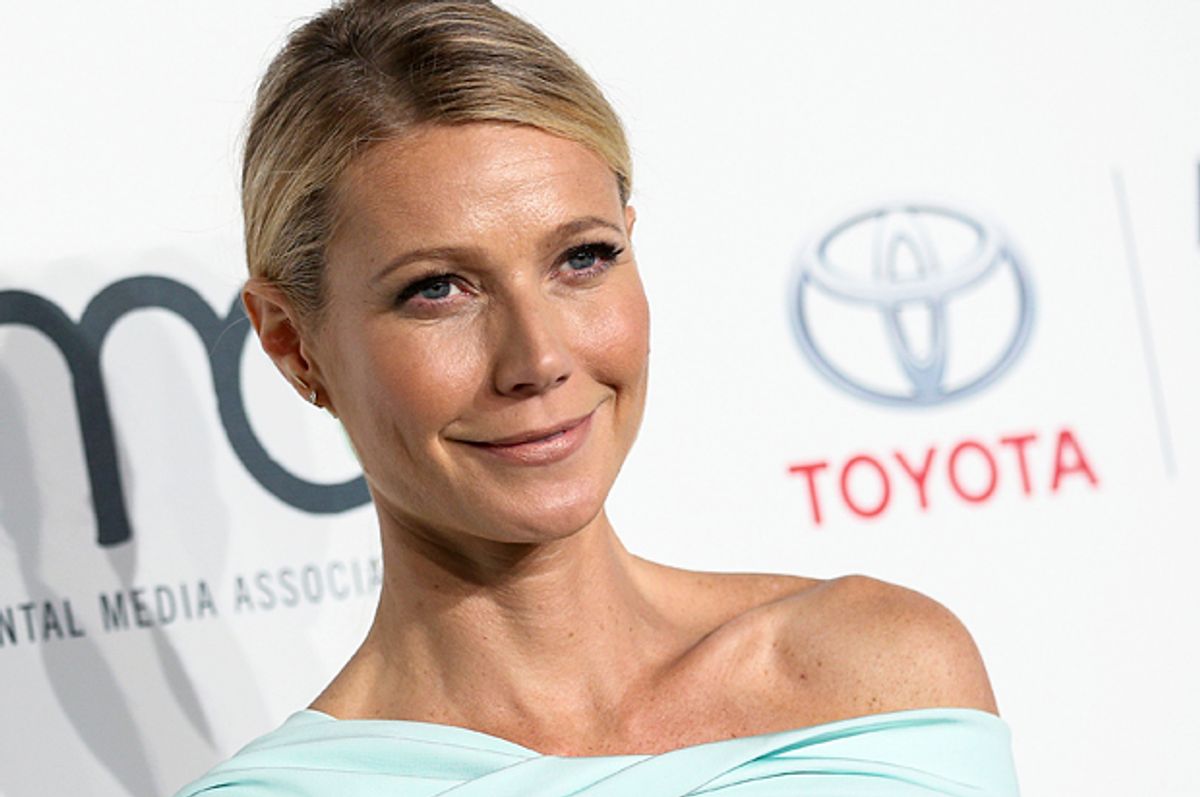 It's taken me twenty years, but I think I've figured out what it is about Gwyneth Paltrow. God knows that it's not that she's relatable — unless you too have an Oscar and have slept with Brad Pitt. It's that she's so identifiable. She's that person so many of us have in our own lives, the stylish, successful smart woman who's also a totally bonkers rich person fad chaser. The latest evidence? Two New York Times interviews in one week, two interviews that reveal a lady who enjoys good books and getting stung by bees.

First, the 43 year-old actress, cookbook author, lifestyle guru and -- most recently — makeup creative director for Juice Beauty appeared in the Times' most recent "By the Book" column, in a conversation that portrayed her as a curious reader with a taste for both high and low literature. She shared that Chelsea Handler's "Uganda Be Kidding Me" and Tina Fey's "Bossypants" made her laugh, that Hanya Yanagihara's "A Little Life" made her cry, that Alice Waters' "The Art of Simple Food" made her who she is today, and that the next thing she's eager to read is Rebecca Traister's "All the Single Ladies," and she did it all while referencing Edith Wharton, Charlotte Bronte and the Barefoot Contessa.

Then Paltrow, whose interest in environmentally safe and healthy foods and products is well documented, also added that she was "furious" reading "Slow Death by Rubber Duck: The Secret Danger of Everyday Things" and "Toxin Toxout: Getting Harmful Chemicals Out of Our Bodies and Our World," by Bruce Lourie and Rick Smith. "Our bodies, and more tragically, the bodies of our children, are paying a price in toxicity for big business. We are being poisoned, and we are poisoning the earth — cancer, autoimmune diseases, behavioral issues... It’s difficult to not attribute the dramatic uptick to environmental factors, what’s happening with our food system, and what’s being put in our personal-care products." And not that too many normal concerned humans would be opposed to a cleaner earth, but that generalized "poisoning the earth" stance is a little vague. Rising cancer rates, for instance, appear attributable to longer lifespans among other factors.  And while neurotoxicity is a real problem, the effects of specific chemicals are still being studied. But Paltrow, like that friend who posts knee-jerk "GMO BAD!" warnings on Facebook without looking into the subtleties of science, doesn't entirely seem interested in those distinctions.

Now, in yet another Times interview, in Monday's Skin Deep column she shares her beauty secrets, some of which are predictably bananas. Let it first be said that in the accompanying photograph, the consciously uncoupled mother of two looks terrific, in a refreshingly un-Hollywood way. Her makeup is light enough to let a few normal, happy creases around her eyes and forehead show through. She's clearly and confidently braless. It's the kind of photo that could just make a fellow hardworking mom (cough) think for a moment, "Damn, maybe I need to try a really expensive liver support cleanse and get my vagina steamed just like Gwyneth."

Yet Paltrow, of course, has meanwhile moved on from her hot tips of last year to go for "an energetic release — not just a steam douche" the next time you're in LA. And it's been several years since she introduced the common folk to the practice of cupping — an ancient Chinese method said to improve circulation and rid the body of toxins. Sure, you can still check on GOOP for the best places to get a gravity based colonic. But as she tells the Times, there are still some things that "might be too hippie-ish even for the likes of me" — she's not yet sold, for instance, on "some new healing modality" called a "sound bath." She is, however, "generally open to anything," admitting, "I’ve been stung by bees. It’s a thousands of years old treatment called apitherapy. People use it to get rid of inflammation and scarring. It’s actually pretty incredible if you research it. But, man, it’s painful." A 2010 Orlando Sentinal story on the practice calls it "a controversial form of alternative medicine" and reminds that "About 2 percent of people have allergic reactions to bees and other stinging insects, and the dangers increase with the number of stings," so there's that. Paltrow also says that "I haven’t done cryotherapy" — in which one's body is briefly exposed to extremely low temperatures for a metabolic boost — "yet, but I do want to try that."

As Timothy Caulfield wrote last year in the self explanatory "Is Gwyneth Paltrow Wrong About Everything? How the Famous Sell Us Elixirs of Health, Beauty, and Happiness," most of these procedures Paltrow embraces are great for reducing your bank account and not much else. Yet there's something about a very rich woman admitting that "I’m always the guinea pig to try everything. I’ve got to try them all" that's oddly fascinating. Most of us know how to be incredibly uncomfortable on the cheap. Then there is Gwyneth, willing to pay good money to get stung by bees or shiver at -264 degrees. Bless her heart. But just when you think her lifestyle is entirely unattainable, she says, "It’s great to eat nutrient-dense organic food, if you can. It’s also really great to drink a vodka and have French fries." I'll meet you at the bar, Gwyneth. We can talk about "Bossypants."