It's too late to halt climate change and our society is doomed -- but wait, that's the good news

"Gasland" director Josh Fox is back with "How to Let Go of the World," a sprawling chronicle of despair -- and hope 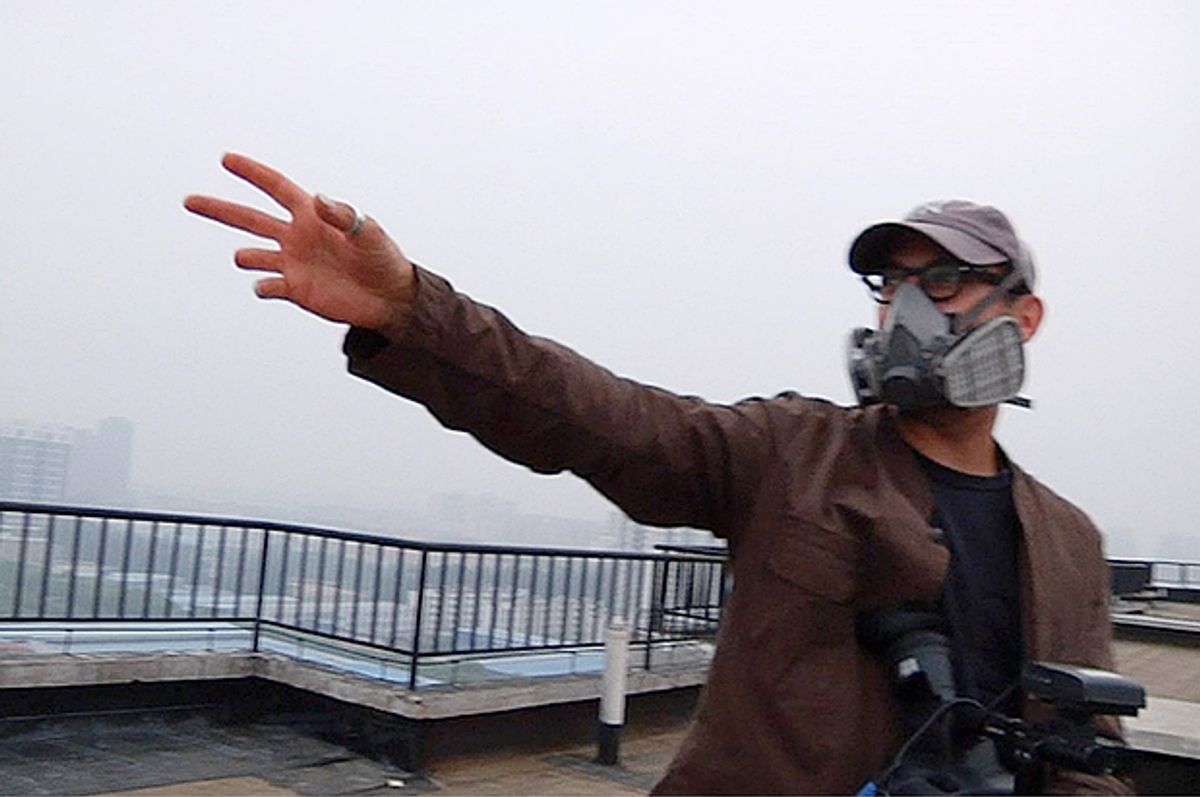 Josh Fox in "How to Let Go of the World: and Love All the Things Climate Can't Change" (IFC Films)
--

It was a full decade ago now that not-quite-president Al Gore and director Davis Guggenheim captured the world’s attention with “An Inconvenient Truth,” a film based on the premise that we still had time to prevent or limit the most devastating effects of climate change if we acted immediately. In case you haven’t noticed, we didn’t. In the United States, the fossil-fuel industry and its Republican lackeys picked away at a handful of loose scientific threads in the film, depicting it as some partisan, puritanical attack on capitalism, consumerism and prosperity. On a global scale, leaders of the major Western nations and the booming economies of Asia could only reach vague and general agreement on targets for reducing carbon emissions, which weren’t binding on anyone and would do little or nothing to slow planetary warming or control climate chaos.

So now we get Josh Fox, the activist-filmmaker behind the grassroots documentary “Gasland” — one of the least likely Oscar nominees of recent memory — making a sprawling, ambitious HBO documentary with exactly the opposite premise. Fox’s “How to Let Go of the World and Love All the Things Climate Can’t Change” is an unwieldy movie with an unwieldy title, but once you get past the slightly forced naiveté of his framing device, it’s a fascinating, heartbreaking and ultimately inspiring ride. He begins by accumulating evidence that it’s effectively too late to stop a major warming of the earth’s air and water, with enormous effects on our coastlines, our climate, our relationship to the ecosystem and all of human civilization. One environmental activist tells Fox in the film that he has had to carve out a place in his heart and mind for despair, and carry it with him, while still doing his work aimed at creating some semblance of a better future. In placid times such a weight can be a burden, he says; in turbulent times, it’s an anchor.

It might sound cruel or Malthusian or post-apocalyptic to suggest that the enormous disruption we are beginning to experience is both a crisis and an important opportunity. But there’s no point lying to ourselves, or shutting our eyes: There’s no way we can save all the species that are likely to be extinguished, all the wetlands that will be inundated or all the farmland that will be baked out of existence. We might not be able to save Miami or Kolkata or Shanghai. But in a filmmaking mode that combines YouTube channel, guerrilla newsman and a younger, less prankish and more athletic Michael Moore, Fox suggests that such devastation won’t wipe out the best and strongest aspects of human community, and that those remain our best tools going into a profoundly uncertain future.

Fox himself is living proof that media activism can accomplish results that are more than symbolic: “Gasland,” with its famous images of people in Pennsylvania small towns lighting their tap water on fire, shifted the national debate on fracking. Although that controversial gas-drilling technique continues in many places, and remains a dividing line between Hillary Clinton and Bernie Sanders in the Democratic presidential race, fracking was first banned in Fox’s home region along the Delaware River, one of the Northeast’s major watersheds, and then banned statewide by New York governor Andrew Cuomo. I’m not sure I believe that Fox was sitting around his bucolic homestead strumming a banjo in celebration, only to realize that beetles brought north by the warming climate were literally devouring the ancient hemlock forest around him. But it makes a useful metaphor for the fact that in a globalized, information-based economy there’s no such thing as a local environmental problem anymore.

In making “Gasland” Fox traveled to many different places in the economically depressed hinterlands of North America, where people raised on myths of sudden riches got ruthlessly scammed by fracking operations that have transformed the rural landscape, contaminated the watershed and dramatically increased the risk of earthquakes in areas where they were previously rare or unknown. “How to Let Go of the World” is an activist travelogue on a vastly greater scale, and highly engaging purely as adventure. Always wearing his retro horn-rimmed glasses and his ancient, faded Yankees cap (he’s too earnest, too “upstate,” to be a hipster, and that’s not a dig), Fox treks for hours through the Amazon jungle to find illegal oil spills and clear-cuts, ventures out on the ocean (with a non-waterproof camera) in a Vanuatu canoe to block Australian coal tankers, and ventures into the gruesome air pollution of Beijing to visit an unofficial graveyard next to a nuclear power plant’s cooling tower.

Do all these encounters with beauty and horror, and with the activists and ordinary people who wrestle with that collision on a daily basis, amount to a political program or agenda? I’m not sure even Fox would argue they do; what “How to Let Go of the World” offers, as I read it, is a combination of questions, propositions and glimmers of hope. When we see indigenous people from the Amazon Basin or the Pacific Islands, some of whom have lived in cities and attended universities, organizing grassroots actions to defend their homes from the ecological catastrophe of oil drilling, or the rising waters caused by coal-fired power plants, we see global interconnection at work and are reminded that environmentalism can no longer be considered an optional lifestyle indulgence practiced by the Western elite. When we meet a young mother in Beijing, herself a former aid worker in Tanzania, whose daughter has become the poster child for an epidemic of respiratory illness among Chinese children, we feel that the old distance between “us” and “them,” between the subjects and objects of history and the world economy, has almost disappeared.

There are old arguments embedded here about the power and limits of individual action, which Fox alludes to but cannot possibly address in detail. Causing one Australian coal tanker to retreat, as the flotilla of canoeists and kayakers does, may be great theater or great therapy. But it does nothing to reduce the Chinese economy’s vast consumption of coal, and on its own it’s not much different from my private decision to recycle my yogurt tubs and drive a Prius instead of an Escalade. Except, no, it actually is different — not in terms of immediate effects but in long-term consequences, in terms of what it might signify for the future. Not to drag the whole question irritatingly back to American politics (which are only a modest piece of a giant puzzle), but what Fox seeks finds here is the growth of collective consciousness and the possibility of collective action, which is also what the Bernie Sanders campaign represents. (It will surprise exactly no one that Fox is a big Bernie booster.)

Some of our rainforests and estuaries and major human metropolises will be lost or greatly altered; that seems like a given. Some of the animal species we have doggedly tried to rescue from extinction will disappear, or live on only as imprisoned zoo specimens. But not all. Damaging storms like Hurricane Sandy — the worst in the history of the Northeastern seaboard — will keep on coming, and getting worse. The ice sheets of Greenland and the poles will melt, at least in part. There is no longer time or opportunity to prevent all that, but there is time to save what can be saved. That starts with human consciousness and human culture, the part of us that has known all along that a society built on greed and gluttony, on endless expansion and endless acquisition, was doomed to fail. Now it has, or almost has, or soon will. Can we find the courage and resilience to build something new?

"How to Let Go of the World and Love All the Things Climate Can't Change" is now playing at the IFC Center in New York, with a national tour and HBO broadcast to follow.