The cereal box is lying to you -- and so is every other label: Why you can't trust that "nutrition" information

Those comforting calorie numbers? They're not reviewed by the FDA, wildly inconsistent and maybe off by 20 percent 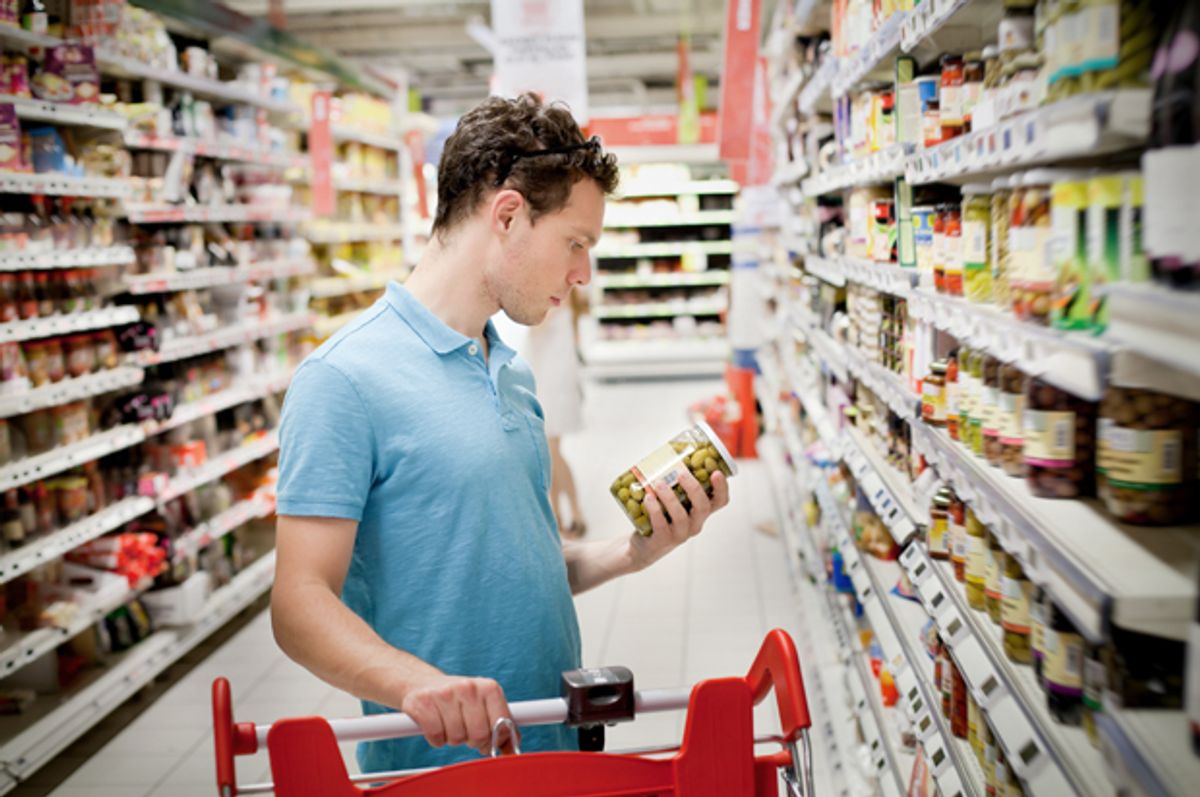 There’s something comforting about the “Nutrition Facts” panels on food packaging. Neatly confined within boxes, printed in Franklin Gothic Heavy or Helvetica Black, these “facts” provide the nutritionally minded among us with a reassuring sense of control. This yogurt has 120 calories per serving. That cereal contains 100 percent of our daily requirements for 13 vitamins and minerals. Nutrition Facts (and their companions, Supplement Facts) enable us to evaluate the nutritional adequacy of our diets and offer a quantified path toward health.

Or at least that’s what we like to think.

In reality, the “facts” of Nutrition and Supplement Facts are far less certain than their name makes them seem. And this uncertainty should make us question many of our assumptions about nutrition.

Nutrition and Supplement Facts panels were mandated by the 1990 Nutrition Labeling and Education Act but, contrary to what many of us believe, their information isn’t necessarily based on an analysis of the food that’s actually on our plate. To begin with, the Food and Drug Administration (FDA) does not specify where the data behind these measurements (like, say, the number of calories or amount of a particular vitamin a serving contains) should come from. Sometimes companies do their own analyses; sometimes they use proprietary databases; and sometimes they simply add up what their suppliers have reported in the raw ingredients.

One of the most reputable sources is the National Nutrient Database for Standard Reference, which is maintained by the U.S. Department of Agriculture’s Nutrient Data Laboratory and contains detailed nutritional information for more than 8,000 foods. But even the National Nutrient Database cannot reveal the nutritional content of your particular slice of pizza. Its values, like those of many databases, are often based on averages calculated from several different varieties or brands.

Most people also don’t realize that Nutrition and Supplement Facts panels aren’t reviewed by the FDA before being published or that the labeling rules themselves allow a surprising amount of wiggle room. Calories are officially allowed to be present at up to 120 percent of whatever number is on the label, for example, meaning that your 240-calorie candy bar could actually have 288 with no penalty, and even the most conscientious counter could be consuming 20 percent more calories than he thinks each day. Carbohydrates and protein, among other nutrients, must simply be present at least 80 percent of the amount on the label. There’s no upper limit. And if serving sizes seem outrageously small, it’s in part because many are based on surveys that were done in 1977-78, when researchers’ understanding of how much people actually eat in one sitting was less accurate than it is today.

The Percent Daily Value column (%DV) is one of the most confusing parts of the panel, and should be taken with several huge grains of salt. Its values, which are calculated based on a 2,000-calorie-a-day diet, are supposed to tell you what percentage of the Recommended Dietary Allowance (RDA) for a given nutrient a serving of the food contains—for example, that a serving of orange juice provides 100 percent of the RDA for Vitamin C.

Many of us interpret this as meaning that a serving of that orange juice would satisfy 100 percent of our own personal requirement for Vitamin C. But that interpretation assumes both that everyone’s nutritional needs are the same and that scientists have figured out exactly how much of every nutrient we should be consuming each day. Neither of those assumptions is correct.

First of all, RDAs aren’t personalized. They can’t be: Every person has slightly different nutritional needs, depending on factors that include health status and lifestyle, gender, age, and activity levels on that particular day. If you’re a small, sedentary woman, you’ll need fewer than 2,000 calories a day. If you’re over 50, you may need more vitamin B12 than someone who’s younger. If you smoke, you may need more vitamin C and folic acid than nonsmokers. Et cetera. At the moment, there’s no way to tell precisely where on the spectrum you personally fall. As a result, the FNB points out, “It is almost impossible to know the true requirement of any one individual.”

Second, the RDAs are deliberately designed to be higher than most people’s actual requirements. An RDA represents the amount of a nutrient that’s thought to meet the needs of between 97 to 98 percent of the healthy adult population over time. Translation: most of us can (and perhaps should) get by on less. You can think of this in terms of clothing: if you were trying to design a sweater big enough to fit 97 to 98 percent of Americans, the result would be a pretty big sweater. Nearly everyone would be able to fit into it, but most of us would be just fine (if not better) with a smaller size.

Third, no one needs to consume 100 percent of their personal requirements (let alone the RDAs) every day. The body maintains stores of most nutrients, which means that what’s important is your average consumption over time. But that’s not clear from the label. Instead, it’s easy to conclude that we should be trying to consume at least 100 percent of our RDAs each day to achieve a perfect nutritional score.

And fourth (and most importantly), we don’t even know if the RDAs are correct. Take the very concept of adequacy – a term that, as the Food and Nutrition Board (FNB) pointed out in a 2003 report, prompts an often overlooked question: “’Adequate for what?’” Scientists still don’t fully understand all the nuances of what nutrients like vitamins actually do once they’re in our bodies, which means we also don’t know the precise role each nutrient might play in the prevention or development of degenerative diseases like type 2 diabetes, age-related macular problems, cardiovascular or neurodegenerative diseases, or cancer.

This means that the RDAs are—and will likely always be—works in progress. As the FNB’s report explains, “[s]cientific data have not identified an optimum level for any nutrient for any life stage or gender group,” and “a continuum of benefits may be ascribed to various levels of intake of the same nutrient.”

To top it off, the %DVs on Nutrition and Supplement Facts panels aren’t based on the most up-to-date recommendations. Instead, they’re mostly based on the version of the Recommended Dietary Allowances from 1968. This means that if your breakfast cereal or multivitamin claims to provide 100 percent of your RDA for a set of vitamins or minerals, those claims are mostly derived from recommendations that are nearly a half a century old.

This is not an inconsequential anachronism. The 1968 recommendations were developed before prevention of chronic disease was even being taken into account. (That didn’t happen till the 70s and 80s. While we still don’t know exactly how much of each nutrient is ideal for chronic disease prevention, at least we’re trying!) And there have been some dramatic changes to the RDAs in the past half-century. The recommendation for vitamin E has dropped by a quarter. Those for vitamins C, D and K have increased by 50 percent. The RDA for biotin is a tenth of what it was in 1968.

What’s more, the current and 1968 versions of the dietary recommendations don’t even use the same measurements. For example, food and supplement labels still list vitamins A, D and E in international units (IU) (a confusing unit of measurement whose definition varies by nutrient), while the current RDAs list them by weight, making it difficult for even the most detail-oriented consumer to calculate what percentage of the current recommendations a particular food provides. The differences between the two sets of recommendations are substantial enough to make the percentages listed on today’s food and supplement labels misleading at best and, in the cases of nutrients like biotin whose recommendations have changed dramatically, nearly meaningless.

The reason that the Nutrition and Supplement Facts panels use recommendations that are so out-of-date is that the Food and Drug Administration is in charge of regulating food and supplement labels, and the FDA’s rules have not kept up with the Food and Nutrition Board’s updates. This is partially the result of the slowness of the FDA’s required rule-making process, which takes years. But it’s also because of several laws passed in the 1990s that prohibited the FDA from updating its requirements (which at that point were still mostly based on the 1968 versions) before Nutrition and Supplement Facts panels first became mandatory.

Put this all together, and the detail-oriented among us are left with a mess. Say your yogurt claims to contain 50 percent of your daily value of a particular nutrient. It’s not clear what desired health effect that 50 percent is based on, or whether the RDA it’s based on (which is most likely out of date) reflects your personal nutritional needs. Like much in nutrition, what we know is dwarfed by what we don’t.

In terms of labels, change may be coming -- but slowly. In 2014 and 2015, the FDA published a set of proposed new rules for Nutrition and Supplement Facts panels that would update which set of recommendations are used for food and supplement labels, among many other proposed changes (including updated serving sizes and a “refreshed design”). It could take several more years for the agency to publish its final version of the rules, especially given that the nutrition and supplement facts part alone garnered nearly 300,000 public comments, all of which the FDA is required to review before publishing final rules. After that, it will likely be at least two years before the changes are implemented and we consumers see these changes on our food labels and supplement bottles. And by then, who knows what other updates the Food and Nutrition Board may have made to its version of the recommendations? It’s possible that the values used for the new labels could also be out of date by the time the new labeling rules are finally enacted.

All of this is not to say that we should ignore the information on Nutrition and Supplement Facts panels, which can be extremely useful in helping us to compare the relative nutritional values of foods. But even if the Nutrition and Supplement Facts panels are redesigned and their underlying values updated, their “facts” will still come with caveats. From our individual requirements to the effect that various nutrients have on our long-term health, there is a whole lot about nutrition that we still don’t — and may never — understand.