We could use an old-school "Network"-style drama about money and the media. This dreary hostage thriller isn't it 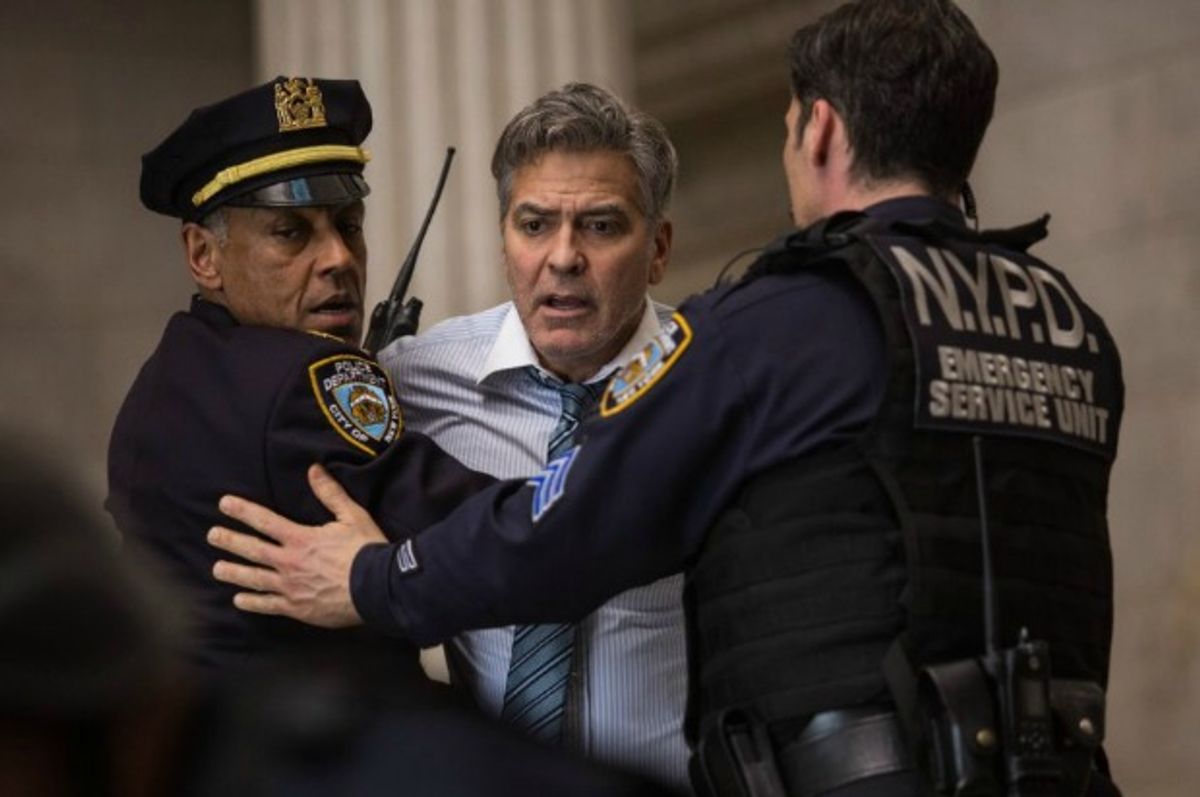 We could definitely use an old-fashioned, character-driven drama about the aftermath of the financial crisis right about now, something larger than life but close to the bone, a big-time movie with movie stars and a satirical edge and its heart on its sleeve in the spirit of “Network" or “The King of Comedy.” Instead we get “Money Monster,” with George Clooney as a loudmouth financial talk-show host taken hostage by a regular Joe who followed his advice. This movie, which marks Jodie Foster’s semi-awaited return to directing (depending on how you felt about her work with old pal Mel Gibson in “The Beaver”), yearns to be all those things and fails painfully. The pieces would seem to be in place, but in practice “Money Monster” is a stodgy, moribund plodder loaded with stock characters that wouldn’t have felt edgy in 1983 and has about the same contemporary urgency as your average late-night rerun of “CSI: NY.”

One could suggest that this formulaic dud offers yet more evidence how far behind the cultural curve Hollywood has fallen, especially relative to TV drama, and how clumsily Hollywood liberal behemoths like Clooney and Foster and Julia Roberts (who co-stars as Clooney’s director) have adapted. That’s not entirely fair when you consider that just a few months ago a major studio released “The Big Short,” one of the bravest, angriest and funniest mainstream films of recent years. Still, I can’t resist making this point, although it may not directly relate to why “Money Monster” is dreadful: Adam McKay, the comedy director who made “The Big Short,” is a genuine left-winger and a Bernie Sanders supporter; Clooney and Foster and Roberts belong to the core Democratic Party cadre in Hollywood that has funded Hillary Clinton’s career for many years.

Is it a coincidence that McKay’s film depicts the 2008 crash as the unavoidable result of systemic corruption and stupidity on a massive scale, whereas “Money Monster” (whose screenplay is credited to Jamie Linden, Alan DiFiore and Jim Kouf) is a “bad apple” story about one flawed company that makes hundreds of millions of dollars vanish? I report; you decide. That’s just one of the numerous ways in which “Money Monster” pulls its punches and avoids taking any controversial or provocative stance, as if trying to avoid offending some middle-ground moviegoing demographic that hasn’t existed for 25 years. Former Wall Street banker John Kasich would find this movie fair and balanced. Ted Cruz would hate it, for obscure and pedantic reasons (though he’d probably be right). Donald Trump would simply fall asleep; no hot babes and not enough action.

Clooney’s career as a filmmaker and star trying to walk the winding path between cultural relevance and adult-grade entertainment, meanwhile, continues to yield mysteriously diminishing returns. It all began so promisingly a decade ago with his genuinely excellent McCarthy-era drama “Good Night, and Good Luck” — and even before that with the underappreciated “Confessions of a Dangerous Mind,” Clooney’s first and best effort as a director. His choices have grown more cautious rather than less so as he finds himself on the north side of 50, and on some level I don’t get it: Does he really think he won’t get another chance if he loses some of Sony’s money? I mean, “The Ides of March” was solid political drama, a nifty two-hander for Clooney and Ryan Gosling, but not nearly as ruthless as it wanted to be. “The Monuments Men” was a cheerful period piece that wanted to win awards or make a lot of money but did neither. And those movies are pretty much the collected works of Frank Capra and Orson Welles compared to “Money Monster.”

Clooney didn’t direct this, likely because he plays the leading role and is in virtually every scene, but his fingerprints are all over it and not in a good way. He plays Lee Gates, host of the eponymous and obnoxious financial talk show on a fictional cable network. Lee is sorta supposed to be a soulless, misanthropic TV guy with a string of divorces behind him and a daughter somewhere he doesn’t even know. But he’s also sorta not, because he’s George Clooney and this movie defaults way too easily to the ritual Hollywood position known as “protecting the star,” which Clooney might once have resisted. In “Syriana” and “Michael Clayton” and “The Ides of March,” you didn’t have the feeling that Clooney was relentlessly laboring to persuade you that his character was fundamentally a great guy, or soon would be once he got in touch with his true inner Clooney-ness.

Let’s put it this way: Lee is never enough of a worthless creep to seem worth redeeming by way of a brush with death. He’s not a Money Monster; he’s barely even a Money Grumpus. It’s transparently obvious that he’ll be fine once the enraged UPS driver and/or Trump voter played by Jack O’Connell stops yelling and shooting out the TV monitors, and that a valuable lesson will have been learned by all. Whatever it may be. Lee is basically just boring and irritating, which goes for everybody else in the movie too. (If he’s halfway modeled on CNBC’s Jim Cramer, for instance — whose cheerleading for crap investments definitely lost lots of money for lots of people — the latter is both a more odious and a more compelling character.)

I’ve pretty much told you the whole plot of the movie already, so don’t sit there waiting for some ABC synopsis. O’Connell is a handsome young British actor of Irish parentage who was terrific in the claustrophobic Belfast war drama “’71” and the British TV series “Skins,” and I quite understand the theory that he’s cut out for movie stardom. But like most actors playing Noo Yawk guys from da nay-buh-hood, and especially like foreign actors doing it, he lathers on the outer-borough accent with a trowel. It’s as if he were trying to wake “Money Monster” from its coma by injecting it with emergency doses of “Mean Streets” or “Bad Lieutenant” or community-theater Clifford Odets. Except that O’Connell is playing a stupider and more literal-minded version of Robert De Niro’s Rupert Pupkin in “King of Comedy,” and there’s no escaping the comparison.

Foster and Clooney cannot be held entirely responsible for a script that has no point to make about the financial crisis or the nature of class and money in America or much of anything else, and struggles mightily not to make it. But they are responsible for pushing onward with the movie anyway because people who wrote large checks told them to, and then for flying over to Cannes and acting like it’s a big deal to unveil a formulaic hostage drama that resembles any number of other, better films and makes a few vague gestures in the direction of media satire.

In all seriousness, “Olympus Has Fallen” is a better movie than this, and it’s genuinely terrible. “The Taking of Pelham 123” is a better movie, or at least a less boring one. Spike Lee’s “Inside Man” is about 30 times better than this, as Jodie Foster should know, since she’s in it. Every film of the ‘90s in which Morgan Freeman plays a hostage negotiator is better, and that’s a number Stephen Hawking could not calculate. All those movies, in fact, have more to say about the world than this one does, whether or not they meant to. “Money Monster” will be mercifully forgotten, sooner rather than later. Whether Clooney and his talented and well-meaning collaborators can learn anything from this fiasco will take longer to play out.