Is “The Neon Demon” gruesome misogyny or brilliant feminist commentary? Can it be both? 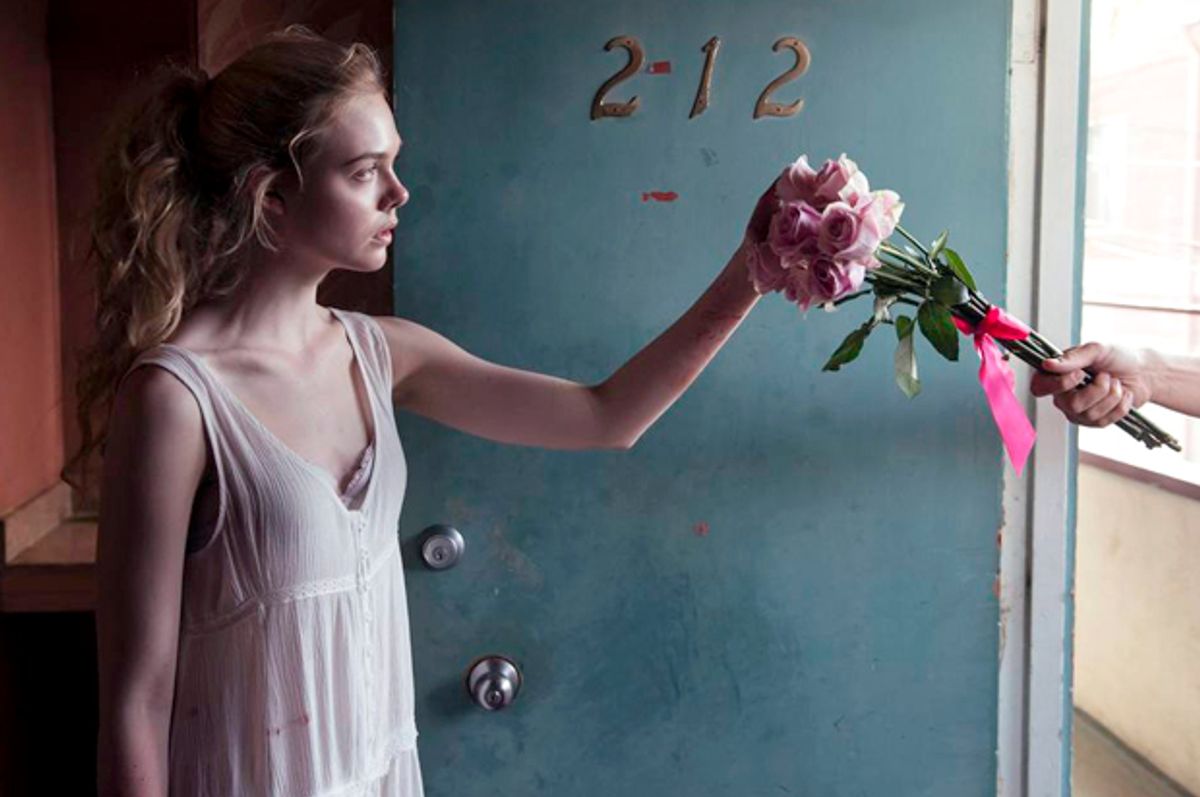 Any number of movies have been made about the depravity of Los Angeles and the moral vacuum of the illusion industries at that city’s heart. It’s virtually a genre of self-loathing all to itself, from Billy Wilder’s “Sunset Boulevard” to Sofia Coppola’s “The Bling Ring.” Nicolas Winding Refn’s fashionista horror film “The Neon Demon,” which is something like the bastard offspring of Brian De Palma and David Cronenberg, with a dollop of David Lynch on the down-low, definitely belongs to that tradition. But “The Neon Demon” is a striking and unusual L.A. story in several respects, not least because most of it occurs indoors.

Sure, there are a few establishing shots of the Pasadena motel where Jesse (Elle Fanning), the teenage aspiring model at the heart of this twisted tale, is staying. In one of Refn’s perverse casting coups, the bearlike motel manager, who is at best a low-grade crook and at worst a vicious sexual predator, is played by Keanu Reeves. (As you may have guessed already, this is not the kind of movie where “reality” is some stable and reliable state.) There are a couple of sequences set in backyards or pool patios and one deliberately stereotypical scene shot at night in the Hollywood Hills, overlooking the city. But we never see the beach, and only catch glimpses of palm trees in the middle distance. Southern California’s legendarily blue skies are no more than a distant design element. Jesse’s saga of life and death in L.A. is almost literally set among the damned souls in hell, a modern-day Brothers Grimm fable that unfolds in rooms where black magic is performed.

Like all the Danish director’s previous films — which include the international hit “Drive,” the underappreciated British crime saga “Bronson” and the hallucinatory revenge drama “Only God Forgives,” possibly the slowest action movie ever made — “The Neon Demon” conflates style and substance to deliberately disorienting effect. In another era, I would have described it as walking a fine line between art and trash. But since no one perceives such distinctions anymore, we can put it another way: Refn is profoundly unconcerned with your comfort or pleasure, in any conventional sense. He wants you to think bad thoughts and wants you to know that he does too. This story of brutal female jealousy and female narcissism is purposefully titillating and purposefully disturbing, and risks devolving into ludicrous self-parody at almost every moment. Whether you think it’s a brilliant feminist commentary or misogynistic softcore porn is entirely up to you. And who says those things cancel each other out?

I don’t think it’s remotely accidental that Refn wrote “The Neon Demon” with a pair of female co-writers (Mary Laws and Polly Stenham) or that its stark and hypnotic images were shot by Natasha Braier (previously the cinematographer of several noteworthy Latin American and European films, including “XXY” and “In the City of Sylvia.”) If Refn was venturing into the treacherous terrain of female beauty and female rivalry, where so many voyeuristic male filmmakers have gone before, he thought he might be better off with some strong women at his side. When we first see Jesse, a 16-year-old from Georgia who is passing herself off as 19 in order to get modeling gigs, she is nearly naked and covered in blood and glitter, while some sinister-looking guy snaps photos of her in a darkened studio. The blood is fake, at least this time around, and the photographer is a guy named Dean (Karl Glusman, of Gaspar Noé’s 3-D sex movie “Love”), who is also new in town and nearly as innocent as Jesse. But as dramatic foreshadowing goes, it isn’t subtle and isn’t meant to be.

Jesse gets noticed at the photo shoot by a wry, redheaded makeup artist named Ruby (an archly honed performance by Jena Malone), who thrusts herself forward as the new best friend and confidant that a doe-in-headlights like Jesse clearly needs. If Ruby has a not-so-hidden agenda, at least she’s not an all-out carnivorous monster like her so-called friends Sarah (Abbey Lee) and Gigi (Bella Heathcote), a pair of willowy veteran models who find themselves north of the legal drinking age and have had so much work done they’re starting to resemble the Daryl Hannah replicant from “Blade Runner.” In fact, that Ridley Scott classic is another influence on “The Neon Demon,” although I hadn’t thought of it till now. Ruby introduces Jesse to Gigi and Sarah at a downtown L.A. performance-art event so sparsely attended the city appears to have been hit with a neutron bomb. This isn’t just a movie about indoor space but about empty space; if the symbolism seems way too obvious that’s because Refn doesn’t even see it as symbolism. He sees it as empty space, fields of light and color and darkness.

Sarah and Gigi view Jesse with halfway affectionate contempt, for about five seconds, until they realize that this little nobody from nowhere, who doesn’t even understand how many casting directors and photographers you have to sleep with to get anywhere, has something they’ve never had and never will. “You have to admit, she has something,” Ruby reflects in a scene where the other girls goad a diner waitress into reciting all the daily specials they are super-obviously not going to order. Jesse’s something, whatever it is, immediately captures the attention of a prominent modeling agent (Christina Hendricks), a star photographer with a reputation for lechery (Desmond Harrington) and a famous and fatuous designer (Alessandro Nivola), not to mention the far less desirable attention of Hank, the motel troll played by Reeves.

But if I’m making it sound like “The Neon Demon” is a movie driven by a rags-to-riches story, or even by a catfight revenge plot, I’m leading you at least slightly astray. It’s much more a series of disturbing but unforgettable images in disconnected indoor spaces, pushed along by the Lynchian sense that Jesse is chasing something that despite her youth and beauty she can never catch. There really is a neon demon in this movie, a recurring unexplained vision of three purple triangles that may be hallucinatory visions or extra-textual interpolations or something else. There’s also a mountain lion that gets into Jesse’s Pasadena motel room, a scene of both metaphorical and literal vampirism and a supremely implausible episode of necrophilia.

Some viewers have complained that “The Neon Demon” slides too far into the gruesome Italian horror-movie vein known as giallo in the final act. I would say, first of all, consider yourself cautioned. Then I would ask, what the hell do you expect? From the Helmut Newton-style images to the throbbing industrial score by Cliff Martinez (in Refn’s movies, music is always a defining element) to the terrifying, affectless performances of Lee and Heathcote as the monster-models, no aspect of “The Neon Demon” points toward a satisfying, naturalistic or audience-friendly wrap-up. If you want to see Tony Scott’s porny vampire drama “The Hunger” again — to cite another obvious influence — hey, I just checked and it costs $2 on Amazon. But if you want a movie that eviscerates “The Hunger” and eats its bloody insides while daring you to look away, here it is.