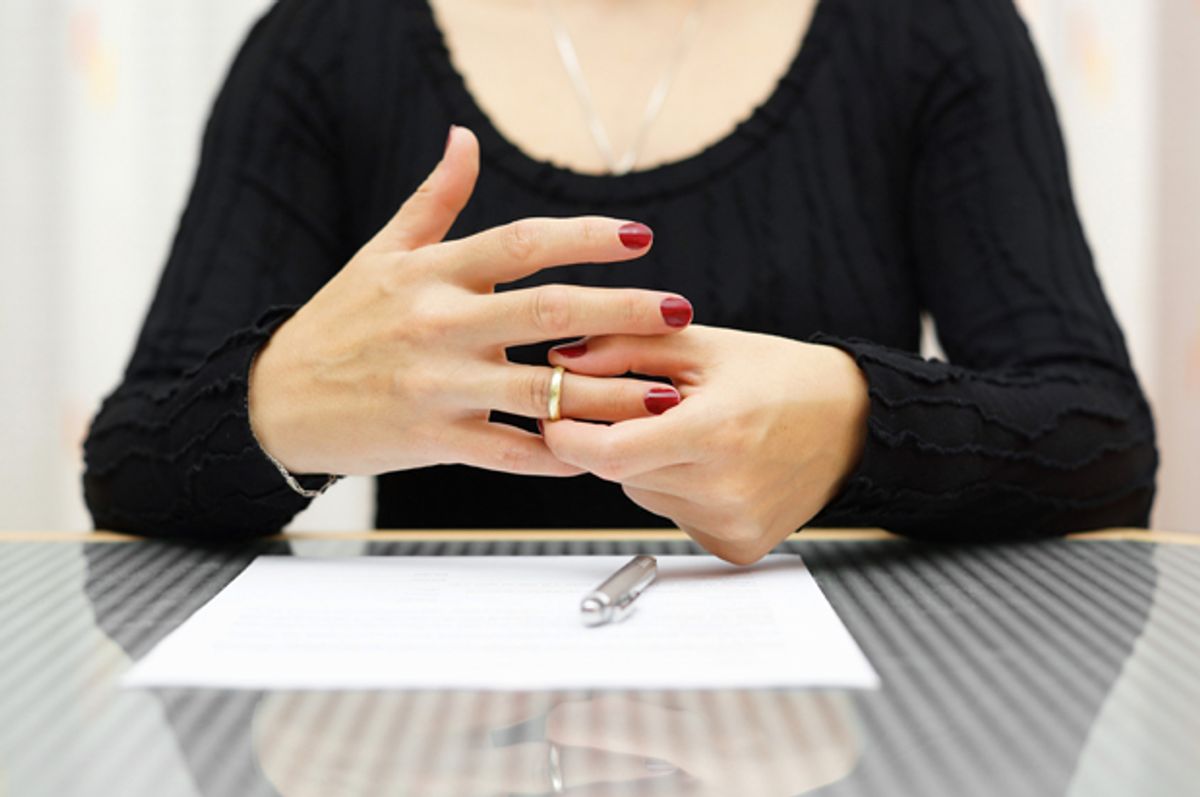 Women love four things, according to hack comedians and romantic comedies: chocolate, shopping, nagging dudes like it’s their job, and marriage. On that last count, we’re told, love rises to the level of obsession: women long to be brides their whole lives and then cling to their marriages when they become wives. But new studies suggest women are less happy in mediocre heterosexual marriages, more likely to call things off and more content with post-divorce life than men. Taken together, the findings debunk a lot of long-held—and outdated—gendered ideas about one of our oldest institutions.

Women and men are equally likely to end non-married intimate relationships, including when the couple lives together. That all changes once vows are exchanged. A 2015 study involving more than 2,000 heterosexual married couples aged 19 to 94 found that women initiate divorce in nearly 70 percent of marriages. Researchers theorize this might be a result of gender norms that make heterosexual marriage an unequal partnership, with women getting the short end of the stick. We know that married couples divide housework evenly until they have a child, after which the woman takes on the bulk of childcare and housework loads shift disproportionately to her.

Marriage does a better job for men of improving health outcomes, decreasing chronic illnesses and extending life spans, than it does for women. Married men make more money than their unmarried male counterparts, but there’s no such income bump for married women. In fact, researchers note that post-marriage, women’s “earnings and careers are thought to suffer.” This might contribute to the reasons why, as study author Michael Rosenfeld of Stanford University told Science Daily, "Women seem to have a predominant role in initiating divorces in the U.S. as far back as there is data from a variety of sources, back to the 1940s.”

"I think that marriage as an institution has been a little bit slow to catch up with expectations for gender equality," Rosenfeld added. "Wives still take their husbands' surnames, and are sometimes pressured to do so. Husbands still expect their wives to do the bulk of the housework and the bulk of the childcare. On the other hand, I think that non-marital relationships lack the historical baggage and expectations of marriage, which makes the non-marital relationships more flexible and therefore more adaptable to modern expectations, including women's expectations for more gender equality."

According to Rosenfeld, this incongruity between women’s wants and expectations, versus the realities they often encounter in marriage, leaves them discontent and more likely to opt out. He says this dissatisfaction with gender roles in marriage “supports the theory that sociologists refer to as ‘the stalled gender revolution,’ meaning that as much as women’s roles in society have changed, women’s roles within the families have changed very slowly.” Traditionalists would blame feminism for this, and they’re actually right—except for the misguided idea that women wanting more is a bad thing. Don’t worry, traditionalists! Women still carry an unequal share of the psychic, emotional and household physical labor of marriages; they’re just a lot less cool with it than they used to be.

"Women have a much higher bar now as to what it takes to stay in a relationship," University of Washington sociologist and sexologist Pepper Schwartz told The Stir, a parenting blog. "The tone of relationship trumps marriage."

Despite all this, there’s an enduring popular image of divorced women as bitter and jaded, while divorced men are portrayed as all too happy to break free. But this again proves wrong when put to the test. According to an online survey of 2,000 U.S. adults by Avvo, a legal research company, 75 percent of divorced women report having no regrets over the decision to part, whereas just 61 percent of divorced men say the same. Women are also much more likely to find dividends in blissful singledom than bummed-out wedlock. “Seventy-five percent of women say they'd rather be alone, successful and happy than be unhappy in a relationship overall, versus 58 percent of men believing the same,” the researchers write.

“Men are more fearful of being on their own once they’ve been domesticated by their marriage, and even though men are more likely to think that marriage is an outdated institution on principle, they’re more likely to want to stay put even if things aren’t so great,” says Schwartz. “Women, on the other hand, prize happiness over marriage, and are less fearful of independence generally.”

For men, the cost of divorce is often higher and far more serious than for women, and greater than previously calculated. The health benefits men receive from getting married find their inverse in divorce. After marriage dissolution, men gain more weight than women, and even sleep worse. The Huffington Post points to a study from University of Nebraska researchers that finds compared to married men, divorced men are “more prone to various diseases, ranging from common colds to life-threatening health problems like cancer and heart attacks.” Divorced fathers are more likely than divorced mothers to sink into depression—which they are 10 times more likely to experience than married men—and to treat their depression by self-medicating with alcohol. Relatedly, divorced men are also more likely to abuse harder drugs. All of these issues lead to increased mortality rates, which researchers estimate may be as high as 250 times that of married men. Divorced men also die by their own hands, at a rate 39 times that of married men.

The role of toxic masculinity, which can be lethal even in small doses, has an undeniable role to play here. Women are often allowed to express feelings of loss, grief and sadness after divorce in a way societally imposed constructions of masculinity deny men. The very human need to confront those feelings, when repressed, forces their sublimation into unhealthy and often risky behaviors. What’s more, women often have wider and more emotionally profound support networks than men. Not because men prefer it that way, but because of our culturally held notions of how relationships between heterosexual men should function and look. Psychology Today notes that “when asked who they would turn to first if they were feeling depressed, 71 percent of men selected their wife whereas only 39 percent of women selected their husband.” The trauma and sadness of divorce can leave people with a deep need to process their feelings. For men, the sudden loss of a trusted spouse and close confidante can be particularly rough.

While women may fare better than men after divorce, they seem to show a marked unwillingness to share responsibility for the demise of their marriages—and by large margins. The Avvo study found that 64 percent of women surveyed said their ex-husbands were responsible for the marriage failing, while just 44 percent of men said the same. When asked whether both spouses should share the blame, just 29 percent of women—compared with 42 percent of men—said they agreed with the statement.

“As the saying goes, it takes two to tango and two to ruin a relationship, but women are less likely to take their share of the blame,” Schwartz said. “Gender roles and traditional stereotypes of domestic partnerships absolutely play a role here. It might be that women believe that self-blame is not empowering, and men may feel as though it’s not masculine to blame their wives.”

Either way, it probably doesn’t help a struggling marriage when one half of the partnership decides all the problems are the fault of the other half. In fact, that can only exacerbate problems. Pepper Schwartz suggests this outlook isn’t a good one, and that couples should probably check in with an unbiased, objective source—say, a clinician—who can help them get past blame and toward healing.

"Get counseling. Go into therapy and get a third-party opinion," she told Stir Cafe. "It's not fair to say nothing's wrong, then call it quits."