It's time to admit it: We're all afraid of terrorism — and that's the entire point of it 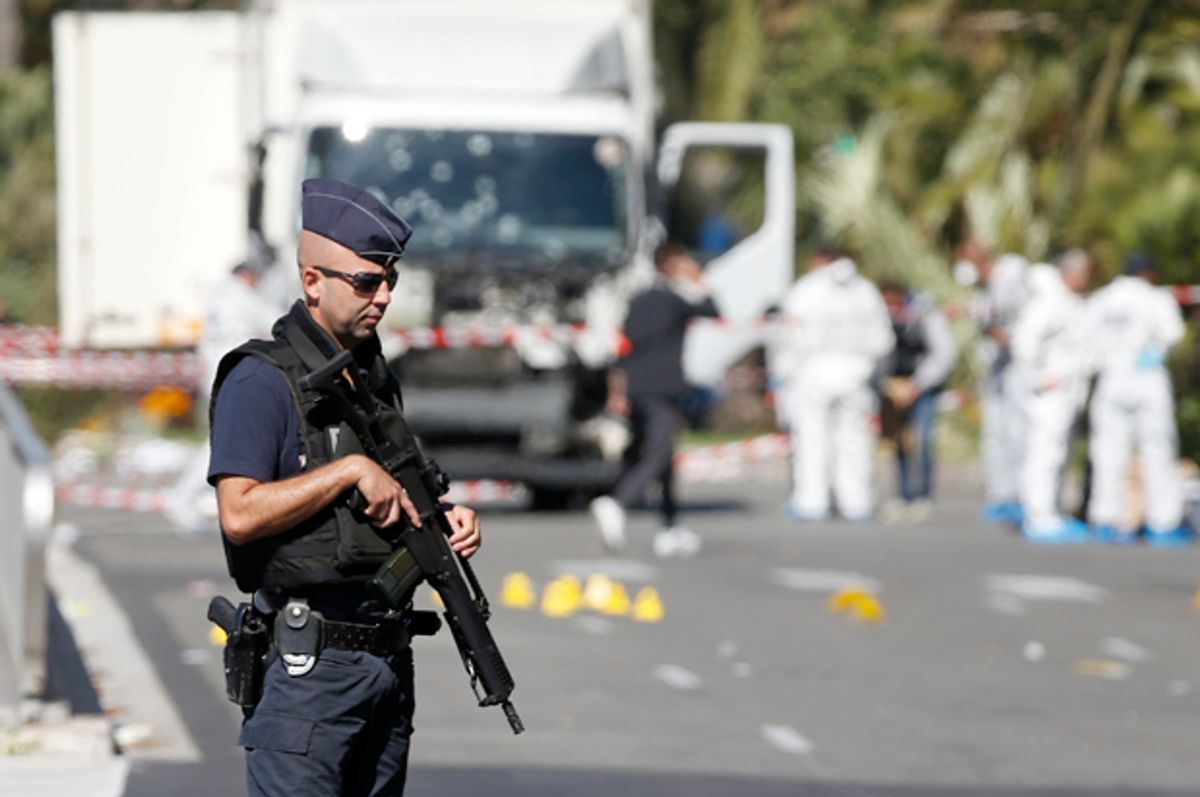 France has been hit by three terrorist attacks against soft targets in 18 months.

The first came in January 2015, when the Charlie Hebdo attacks killed 12 journalists and eight others.

The second was the November 13 attacks that took the lives of scores of people enjoying a Friday night out in Paris.

And then, on Bastille Day 2016, an attack that targeted ordinary people celebrating the French national holiday in the seaside city of Nice — at least 84 were killed and many more seriously injured. Families out to enjoy the fireworks display were deliberately run over by a speeding truck.

In addition to these highly publicized attacks, there have been numerous individualized murders that draw less media attention outside France. A police officer and his wife were stabbed to death in Magnanville. Mosque guards were rammed by a vehicle in Valence.

While arguably no part of Europe or the United States is free from the risk of attack, France is proving particularly vulnerable to these freelance ISIS-inspired terrorist attacks. And this is having political consequences.

Most observers agree that the sitting Socialist Party President Francois Hollande has been notably inept at dealing with every crisis that has afflicted France since he was elected. Security is no exception. Hollande has the lowest approval ratings of any sitting French president in recent history.

Looking toward the French presidential election in 2017, continued terror attacks and the failure of the French government to halt their occurrence has been a political gift to the nationalist right leader Marine Le Pen. Since 2012, Le Pen has been on track to make it to the runoff round in the the French 2017 presidential election. She came in third in the 2012 presidential election. She and her party, the National Front, came in first in the 2014 European Parliamentary elections. The National Front made it to the runoff round in six regions in the December 2015 regional elections, although in the end it failed to capture any leadership positions. Recent polls place Le Pen ahead of all other party candidates.

Unlike Hollande, Le Pen has offered hardheaded strategies for coping with the security threats in France after the various attacks. A recent poll reveals that 67 percent of the French do not trust the government to handle terrorism. After the Brexit vote, Le Pen called for a “people’s spring” invoking the revolutions of 1848. After the Charlie Hebdo attacks, she claimed that France was attacked by “Islamic fundamentalism” and it had to be named.

French national as well as some international media describe her as far right, but the label is wearing thin as her positions are becoming more mainstream in response to these dramatic events.

Recently, American media has been somewhat softer on her. In 2015, Time magazine named her one of its 100 notable people. The New York Times has given her op-ed space.

Ironically, Francois Hollande and his government have taken many, if not all, National Front positions on security policy, such as his failed attempt to take citizenship away from naturalized persons suspected of terrorist involvement.

Hollande used her language when he addressed the French people after the Nice attacks: “All of France is under threat from Islamist terrorism.” “Islamic terrorism” was once a taboo phrase to use and only associated with the right.

Le Pen recognizes and acknowledges rather than denies fear. She talks tough. After the November Paris attacks, she said that “France is not safe.” This resonates with ordinary people watching the attacks in multiple media. In response to the Nice attacks, Le Pen posted on her website, “The war against the scourge of Islamist fundamentalism has not begun — it’s now urgent to declare it.”

In contrast, the emotionally tone-deaf French Prime Minister Manuel Valls told shocked French citizens after the attack that “times have changed, and France is going to have to live with terrorism, and we must face this together and show our collective sang-froid.”

Social media lit up against him. He was booed when he attended the commemoration ceremony in Nice for the victims.

What Le Pen understands, and Hollande and others ignore at their peril, is that fear is a powerful emotion. In these circumstances, it’s natural. As my essays on emotion show, we experience emotions of all sorts viscerally before we try to rationalize them and make sense of the events that generated them. My work on Italian fascism suggests that even in the past, right wing politicians are often more adept than their liberal counterparts at valorizing emotion and responding viscerally to events.

Ironically, like Valls, politicians on the center left and right are careful of inciting anti-Muslim backlash. They preach stoicism and warn against fear as a response to these horrific events. These responses leave out something important — French Muslim citizens are also killed in these attacks. I am guessing that they are as fearful of losing their lives through random acts of violence as anyone else.

We also see this reaction in the United States. A favorite admonition in America after 9/11 went something to the effect that you should carry on with whatever you wanted to do or else “the terrorists win.”

But the terrorists win in a broad sense from the moment that the first shot is fired, the first bomb is thrown, the first life is lost. Terrorist acts are fear-generating events — that’s the point of terrorism. One never knows when something will happen.

By not acknowledging the fearfulness of these attacks, politicians leave a wide-open space for the right to colonize this very rational emotion. Denying fear exacerbates it and contributes to diffuse forms of backlash.

Fear can be paralyzing, as Franklin Roosevelt famously warned in his “we have nothing to fear but fear itself.”

But fear also has the potential to be positively enabling. Acknowledging fear is a first step toward neutralizing it. Liberal, leftist and centrist politicians and leaders should take fear seriously and not leave it to the nationalist right.

Mabel Berezin is a professor of Sociology at Cornell University.