How low can the bar go? Donald Trump's RNC is historic for all the wrong reasons

The GOP nominated the most dangerous candidate since Barry Goldwater, but they didn't even make a fuss this time 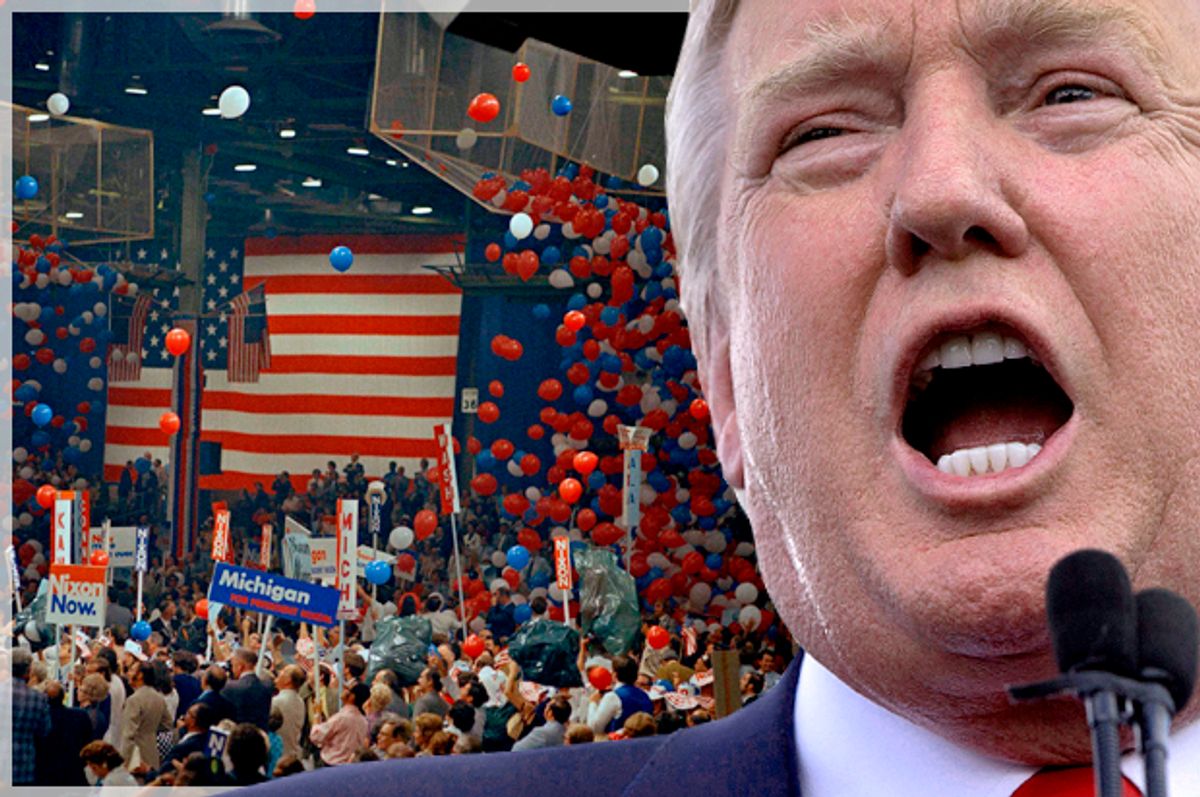 “What we were looking for was something that would put the nation and the rank and file of the Party on the alert to the fact that our leading candidate was impetuous, irresponsible, and slightly stupid.”

These words were spoken not about Donald Trump and his nomination at the Republican National Convention of 2016, but regarding Barry Goldwater, who in 1964 was the last GOP presidential candidate to seize the party from the establishment. Then again, they just as aptly sum up the underlying significance of Trump being officially nominated. Even though Trump is easily as much of a threat to the country as Goldwater was believed to be fifty-two years ago (if not more so), his hostile takeover of the Republican Party seemed foreordained. Its 1964 counterpart, on the other hand, seemed uncertain until the last minute and eventually broke out in violence.

At a time when we’ve been distracted by Melania Trump’s plagiarized speech and her husband’s call for a “law and order” campaign, the most remarkable story of this week may very well be that such a patently dangerous man was officially nominated for president … but with a whimper, not a bang.

Make no mistake about it, Trump is a very dangerous man. Oddly enough, one of the main dangers about Trump isn’t being widely discussed — namely, the fact that he is clearly mentally incompetent to be president. As Tony Schwartz, the writer who ghost-authored Trump’s famous book “The Art of the Deal,” observed to The New Yorker, Trump “has no attention span … It’s impossible to keep him focussed on any topic, other than his own self-aggrandizement, for more than a few minutes.” As he later pointed out, “if [Trump] had to be briefed on a crisis in the Situation Room, it’s impossible to imagine him paying attention over a long period of time.” When you add this to the number of prominent therapists who have stated Trump displays textbook narcissistic personality traits, serious practical questions emerge about his mental fitness to occupy the Oval Office.

There is another dangerous aspect to what Trump has done. To the extent that he has an ideology, it is the simplistic one of a man who is prone to sweeping generalizations … and who likes to create scapegoats. Think of the conspiracy theories with which he has been prominently identified — from insisting President Obama wasn’t born in this country and never attended Columbia University to claiming that Ted Cruz’s father had been involved in John Kennedy’s assassination. When his fringe proclivities aren’t simply bizarre, they become hateful. The man who would build a wall to keep out Mexican rapists and criminals and ban all Muslims from entering America starts out by referring to them as monoliths —  the Hispanics, the Muslims and so on.

So how come the man’s nomination has been inevitable? Why has he been at the top of the polls since he launched his campaign last year, and then swept through the primaries like an unstoppable force until his nomination last night became a matter of course? How could our political climate have allowed such a thing to happen?

Part of it is that, in the half century since Goldwater took over the Republican Party, that organization has grown increasingly comfortable in the world of overt racism. Polls already indicate that Trump supporters are more likely to hold bigoted views about racial minorities than any other group in the GOP, and this is no coincidence. A direct line can be drawn from Trumpism to the racism embedded in much of the Tea Party’s opposition to America’s first black president or to the coded language used to win elections by Republican presidents like Richard Nixon and Ronald Reagan. In this respect, he is as much a product of modern Republicanism as he is its albatross. That said, as Mitt Romney astutely pointed out on CNN’s “The Situation Room,” Trump has lowered the bar to a new depth, since “presidents have an impact on the nature of our nation, and trickle down racism and trickle down bigotry and trickle down misogyny — all of these things are extraordinarily dangerous to the heart and character of America.”

By contrast, our willingness to minimize the danger posed by a potential Trump presidency is rooted in the overall political zeitgeist. As Bob Woodward once explained in “Shadow: Five Presidents and the Legacy of Watergate,” Americans had gradually lost faith in their presidents as scandals and abuses of power became increasingly frequent in the years after Watergate. Trump’s own chief opponent, Hillary Clinton, has made matters worse with a string of scandals in her own background, the most conspicuous of which resulted in the FBI declaring that “there is evidence that they were extremely careless in their handling of very sensitive, highly classified information.” My guess here is that, at a time when so many have lost faith in the character of those who govern us, it’s easier to not see the difference between corruption and a very different and far more threatening alternative, genuine stupidity (which often comes with bigotry). Ironically, Trump has plenty of his own corruption allegations, but I suspect these are just being lumped in with his myriad other problems. In the end, we may elect a mentally incompetent man to be president for no other reason than our desensitization to loathing our leaders.

That’s why, when the meaning of Cleveland is discussed in history, I suspect observers will marvel at how the ugliest corruptions in America’s political soul ate itself alive. It didn’t gnash its teeth (at least not yet) or make a scene. Indeed, by the time people realized what was happening, it was too late to stop it. Now all we have to do is hope that, now that the Republicans are putting an “impetuous, irresponsible and slightly stupid” man in front of the American voters, they won’t make the world-changing mistake of electing him.