Obama, Clinton and the activist left: Open dissent is the Democrats’ greatest strength 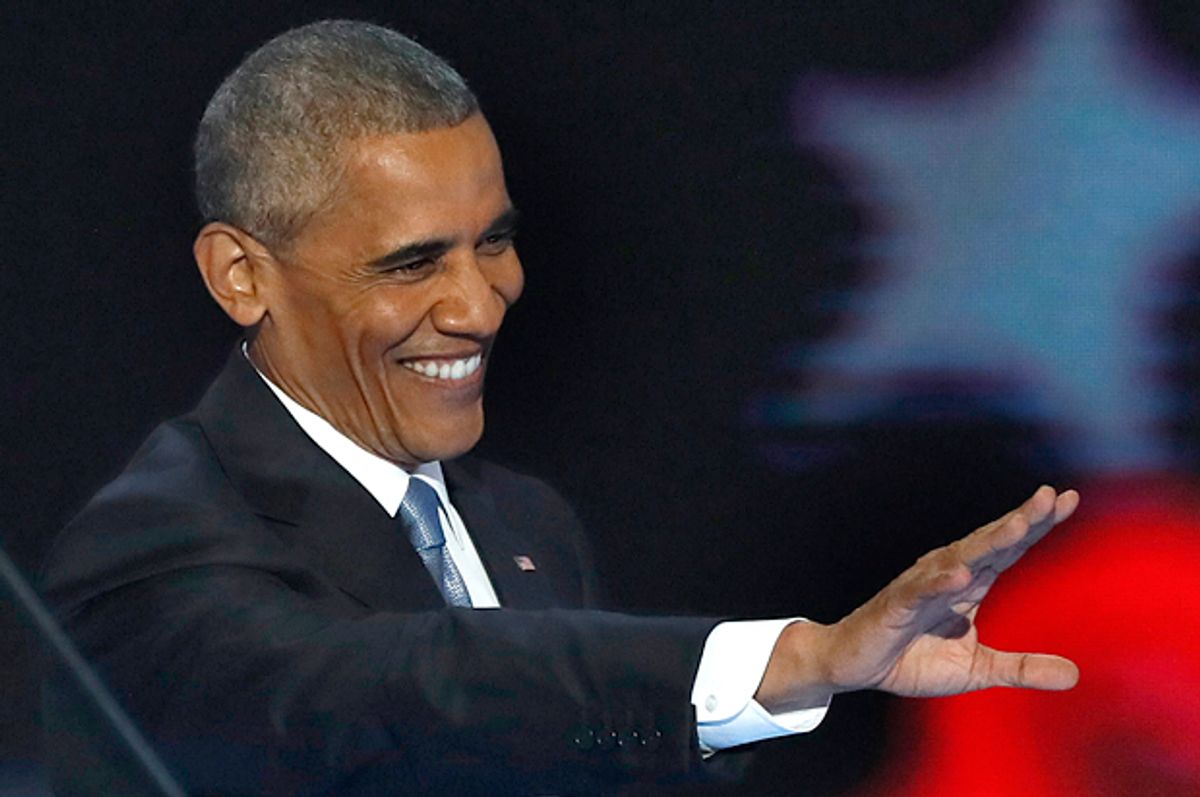 PHILADELPHIA — Barack Obama’s stirring address to the Democratic National Convention on Wednesday night, a long-winded peroration of Bill Clinton-esque proportions, full of rhetorical peaks and valleys, had the feeling of a farewell address. Indeed, while Obama will occupy the Oval Office for another six months, it might have been his last big chance to address the nation as president. It fell into roughly three parts, like Caesar’s Gaul: An eloquent defense of his own legacy and accomplishments; an attack on the deranged and dangerous candidate put forward by the opposition party (which, as Obama observed, no longer resembles itself); and a passing of the political torch to his former rival, former strategic partner and anointed successor.

There were great strengths to that speech and also great weaknesses, which highlight the challenge awaiting Hillary Clinton as she accepts the Democratic nomination on Thursday. Whatever you make of Obama as a president, he remains one of the great political orators of our time, not least because of his remarkable ability to code-switch, to move from the vernacular of a South Side black preacher to the vernacular of his white Kansas grandparents with seamless comfort. Obama entered politics almost visibly seeking to claim the mantles of Martin Luther King Jr. and Bobby Kennedy, both of whom died when he and I were small children. How much Obama has done so in political terms is a far bigger issue than I can hope to address here. But as a public speaker, he is very much a rhetorical fusion of MLK and RFK.

But Obama’s code-switching was about more than his biracial heritage. His long speech wove its way through and around the central issue of this convention: the unpredictable infusion of new activist energy brought by the Bernie Sanders campaign, and the question of whether that is an asset or a liability when it comes to defeating Donald Trump. I remain amazed, and quite frankly insulted, that so many Democrats seem determined to crush internal dissent and insist on a happy-talk spectacle of enforced conformity. What party do they think they belong to, and what do they know about its history? It’s an insult to the collective intelligence of the broader left-liberal tradition in this country, delivered by well-meaning people who claim to be its defenders and ought to know better.

Obama absolutely didn’t do that, and whatever reservations you or I or anyone else may have about Hillary Clinton, I feel confident that she won’t do that either. Obama and Clinton are pragmatic institutional politicians, but both have a deep understanding of political history and the dynamics of political change. It’s important for all of us, especially critics on the radical left, to recognize that they also have personal experience from an outsider, activist perspective.

As Bill Clinton told us the other night, Hillary Rodham was an intelligent and highly ambitious young woman at a time when that marked her as rebellious, even as radical. She was a College Republican driven to switch sides by the Vietnam War who rang doorbells for Eugene McCarthy, the Bernie Sanders of his day. Barry Obama was a young African-American from a highly unusual background, who did not fit well in either white or black society. (He and I were briefly classmates at Columbia; I didn’t know him well but remember him as aloof, cool, likable and a bit of a loner.) Working as an activist and organizer in Chicago’s black community became both Obama’s pathway to power and the basis of his constructed identity. As numerous right-wing websites will inform you at length, both Clinton and Obama were influenced by Saul Alinsky’s “Rules for Radicals,” a theoretical and practical manual translating grassroots activism into political power.

Obama’s speech last night featured a calculated shout-out to Sanders and his supporters, and the president even threw in an impromptu “That’s right — feel the Bern!” Which he really doesn’t, and anyway it’s a hell of a lot easier to say that now. Hillary Clinton’s speech on Thursday will include a similarly gracious gesture, no doubt, which is just normal intra-party politics. More noteworthy and significant, at least to me, was Obama’s attempt to cast mainstream electoral politics as “real” politics, and to elide the complicated relationship between radical outsiders who demand the impossible and institutional insiders who deliver tiny increments of the real.

Just moments after invoking the Bern, Obama augmented his endorsement of Clinton by saying: “She has been caricatured by the right, and by some on the left.” He then drew on a well-known passage from a 1910 speech by Teddy Roosevelt called “Citizenship in a Republic,” which could not have been more clearly targeted at “Bernie or Bust” protesters and other left-wing critics of the Democratic Party mainstream. I had never considered the relationship between Obama and the elder Roosevelt before, but it merits further exploration: Teddy was a progressive Republican reformer, and also a committed nationalist and interventionist; he may have been the first president to perceive that women and African-Americans required and deserved full citizenship rights, although that goal remained well out of reach in his time.

It’s worth quoting Roosevelt’s speech at greater length than Obama did: “It is not the critic who counts; not the man who points out how the strong man stumbles, or where the doer of deeds could have done them better. The credit belongs to the man who is actually in the arena, whose face is marred by dust and sweat and blood; who strives valiantly; who errs, who comes short again and again, because there is no effort without error and shortcoming; but who does actually strive to do the deeds; who knows great enthusiasms, the great devotions; who spends himself in a worthy cause; who at the best knows in the end the triumph of high achievement, and who at the worst, if he fails, at least fails while daring greatly, so that his place shall never be with those cold and timid souls who neither know victory nor defeat.”

Obama’s point, of course, was that Hillary Clinton has spent her life getting covered in sweat and blood in the arena — as the most prominent female “man in the arena” in our history — while those of us who “criticize from the sidelines” (Obama’s words) are the cold and timid souls who have risked nothing. It’s an argument worth considering, especially for those of us who make a living sitting at a computer keyboard. But you can’t boil down the powerful ambiguity of Roosevelt’s words into a defense of partisan loyalty or institutional politics. As Obama and Clinton surely know, Teddy Roosevelt felt the Bern before Bernie Sanders was born. Two years after that speech, he rejected the bipartisan system and tried to strike out on his own: “Present conditions in the two old parties, and the platforms put forth by both of them ... show that it is hopeless to get anything good out of them. To endeavor to punish each alternately by voting for the other is to follow the course most gratefully appreciated by the corrupt bosses of both.”

What deeds count as deeds, in Roosevelt’s sense, and what is the true arena of politics? Not even the most hardened Hillary hater can question her commitment to women’s rights, children’s welfare and education, and she has spent her life in the arena advocating for those causes. Amid the noise and smoke of the arena, she has also advocated for Wall Street investment banks, NSA surveillance programs and the drone war, and a series of disastrous foreign interventions for which Benghazi is the dumbed-down Republican synecdoche. She says she no longer supports wide-ranging free-trade deals on the NAFTA model, or slashing social services in the name of fiscal austerity, or bringing juvenile offenders “to heel.” Yes, there is no effort without error and shortcoming, but to many of Clinton’s critics that looks like effort expended on unworthy causes.

Yes, Hillary Clinton is a woman in the arena. She has made history, and will make more. But Bernie Sanders and his millions of supporters, who found out the hard way that idealistic political crusades don’t always have Hollywood endings, have been bloodied in the arena too. One of Obama’s best moments, and biggest cheers, came when he told the lit-up Philadelphia crowd that the task ahead involved not just electing Democrats up and down the ticket — “mayors and sheriffs and state’s attorneys and state legislators” — but also “hold[ing] them accountable until they get the job done.” That unglamorous work happens in the arena as well.

I’m sure Obama did not appreciate being heckled by a handful of protesters opposed to the drone war and the Trans-Pacific Partnership. Clinton, who can be prickly at times, will probably face more of the same on Thursday night. But I don’t think either of them is dumb enough to believe that public disagreement within the liberal-left coalition will somehow hand the election to Trump. Furthermore, they both understand that in the longer arc of political history, radicals who make seemingly unreasonable demands are necessary to move their party and the American public forward.

During his brief summary of his accomplishments, Obama included a boilerplate remark about how we had “learned that love has no limits, and marriage equality is now a reality across the land.” At first I felt irritated by this brazen hypocrisy: Obama and Clinton and most of the Democratic center opposed marriage equality until long after the point when public opinion had clearly shifted, viewing it as a dangerous wedge issue the Republicans could use in swing states and marginal districts. But if you read the transcript of Obama’s speech, he finesses the issue, seeming to take credit without actually doing so: It was “countless acts of quiet courage” that created this change.

That’s neatly put, but I would take issue with “quiet,” and so would the thousands of LGBT activists and supporters who battled for years, at every level of government and in every inch of the public arena, to make marriage equality real. Still, I choose to read that phrase as Obama’s quiet acknowledgment that on issue after issue, and in decade after decade, activists and radicals lead and the Democratic Party follows. Where was the party on civil rights in 1964, or Vietnam in 1968? Should the outsiders and dissidents in those years have shut up, put on ties and collected signatures at a shopping center? What did the party platform look like on criminal justice and trade issues and Wall Street regulation during Bill Clinton’s tenure, and how did we get from there to here? Where is the party on marijuana legalization right now, an issue on which many cities and many states (and some Republicans) are way ahead?

There’s no point denying that this convention has witnessed considerable tension between Sanders-juiced activist newcomers and Clintonite party regulars. It has also been packed every night, with an energy level many times greater than that found in the Trump Memorial Mausoleum last week in Cleveland. But the inside-outside interaction in Philadelphia has been more diverse and less confrontational, I would argue, than the image presented by many of my media colleagues. At its best, the Democratic Party has not thrived because of some enforced artificial unanimity, but because the tension between activists and institutions has fueled progressive change. At their best, leaders like Barack Obama — and, I hope, Hillary Clinton — understand that creative tension, and know how to channel it.