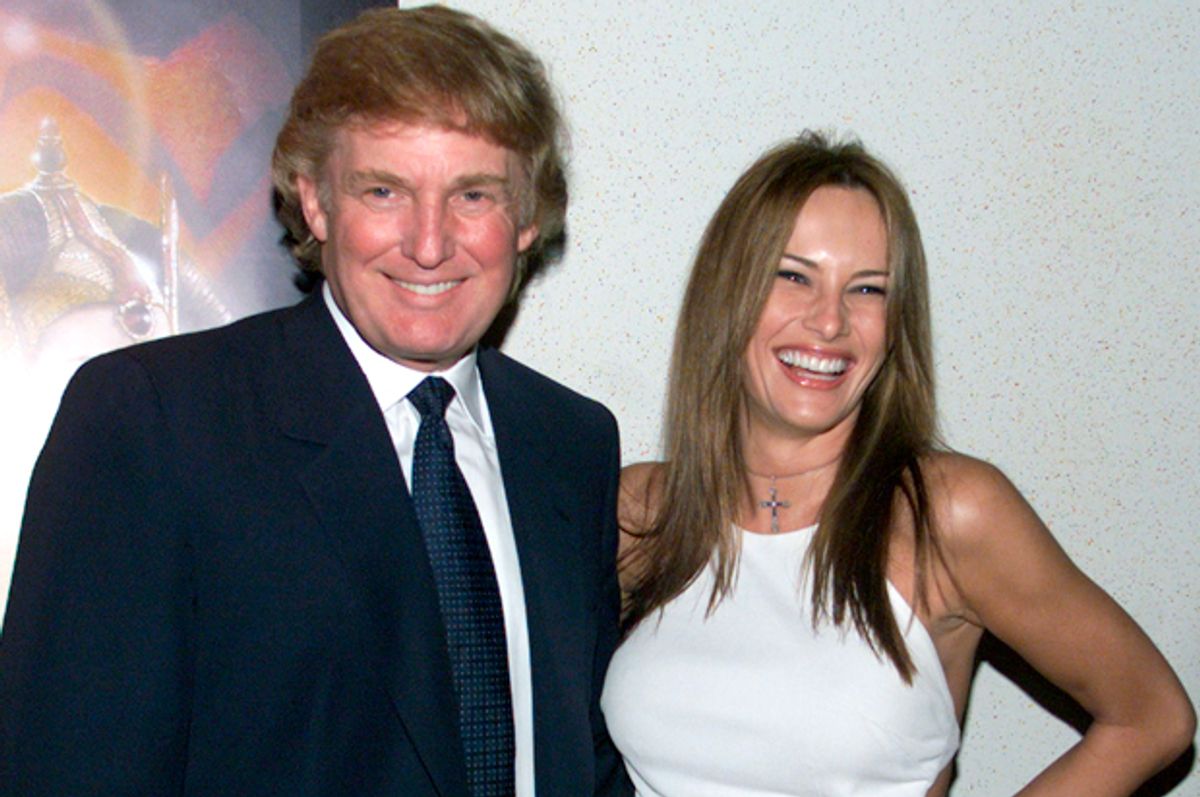 Donald Trump and Melania Knauss arrive at the New York premiere of Star Wars Episode I: "The Phantom Menace," May 16, 1999. (Reuters)
--

What exactly is the New York Post's point here? Is it some straight up slut-shaming, an attempt to pass smug moral judgment on a prominent woman's past, because that's just what the Post does? It is a clever con by a conservative, Murdoch-owned and Trump-endorsing newspaper to deflect attention from its garbage-fire candidate and his recent temper tantrum at the grieving mother of a war hero, his continued failure to disclose his tax returns,  his blatant lies about the debate schedule, or his terrifying ignorance of world events? Or is it as simple as this: The Post saw boobs and didn't think any further than ka-ching? I don't know; take your pick. The point is that the Post's choice, for two days in a row, to run naked covers of Melania Trump is definitely irrelevant, idiotic and insulting.

Melania Trump, the Republican presidential candidate's third wife, is a former model. Her career — unlike her education — is well-documented. The 46-year-old Slovenian has had her photograph taken plenty of times in the 30 years since she started modeling as a teen. Many of those photographs are revealing. In 2000, she appeared naked on the cover of British GQ — in an issue that also boasted other "naked supermodels!" including Kate Moss and Amber Valletta. This is not news.

And yet, on Sunday the New York Post suddenly went all in on this aspect of Mrs. Trump's past, with a cover image of her from a nude shoot in 1995 captioned, "The Ogle Office: You've Never Seen a Potential First Lady Like This!" The young Mrs. Trump's nipples are patriotically covered in blue stars. Then on Monday, the paper one upped itself, with a photo of Mrs. Trump, this time with her nipple obscured in a red star, nude and in the embrace of another naked woman. The headline? "Menage a Trump."

Whatever the Post is playing at here, it's definitely working like gangbusters. The current top three stories on the Post all involve Mrs. Trump's Nineties-era assets. Her "girl-on-girl photos from racy shoot" in a "in a nude frolic with another female model" tale reads like an open invitation to Post readers to just go ahead and touch themselves: "The raciest of the photos shows Melania lying nude in a bed as Scandinavian model Emma Eriksson, also naked, embraces her from behind, just below her breasts, which are fully exposed."

But in another "story" about "Melania Trump like you've never seen her before," her husband sounds uncharacteristically coherent when he tells the Post, "Melania was one of the most successful models and she did many photo shoots, including for covers and major magazines. This was a picture taken for a European magazine prior to my knowing Melania. In Europe, pictures like this are very fashionable and common."

Uh, I don't know how to say this but... Donald Trump is right.

Melania Trump is not your typical politician's wife because Donald Trump, with his total lack of any political experience whatsoever, isn't your typical politician. And by the way, if the New York Post thinks you've "never" seen a First Lady like Mrs. Trump, may I introduce you to former First Lady of France, Carla Bruni — a woman who spent a good part of the Nineties posing naked and dating rock stars? Also, who cares?

So is this hubba-hubba from the Post an attempt to make Americans forget that Melania Trump delivered a plagiarized speech at the RNC and had her whole site quietly scrubbed after it became increasingly apparent she hadn't been truthful about her backstory? Is it, as GQ and others have speculated, a deliberate strategy from the Trump team itself? Whatever its motives, for the Post to splash Mrs. Trump's naked image around and say that "nude photos surface" as if it were some kind of secret that a model, who has been naked in magazines, has been naked in magazines, is pretty ridiculous. We all know she's been naked, because models often get their pictures taken wearing little or no clothing. That's in the job description. And if conservatives want to berate women for allegedly "voting with their vaginas" this year, it's a bit absurd that the paper that supports Donald Trump clearly is betting on its male readers endorsing their would-be First Lady with an organ other than their brains. And Melania Trump's not nearly as naked as the Post's cynicism.