Breaking: The Greatest Living American Writer: "I can no longer support this Trump fellow"

The latest Prince of Darkness to abandon Trump is his erstwhile squash partner, the Greatest Living American Writer 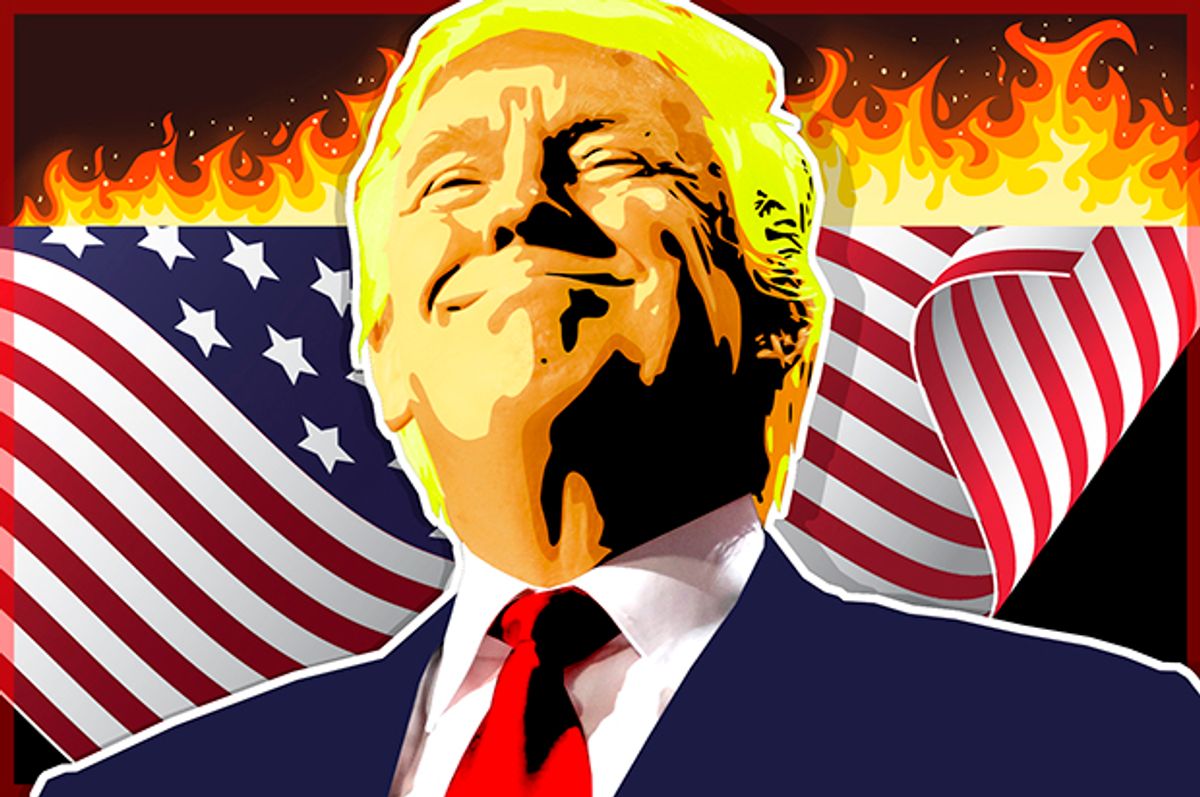 I am the Greatest Living American Writer, the most important voice in American letters since Emerson, and definitely more important than Jonathan Franzen, who isn’t really all that important when you think for more than a minute. Beyond my groundbreaking and occasionally avant-garde novels, poetry, essays, and blacklisted film scripts, I have a long history as this false Republic’s foremost political commentator. I propped up FDR in his wheelchair, served as JFK’s sexual substitute when he got tired, and then switched gears to write Richard Nixon’s lines on Laugh-In. With only one exception — a brief and unfortunate stint as Walter Mondale’s communications director in 1984 — I’ve been a loyal general in the noble Republican cause since then.

Therefore, it is with great regret that I must announce I will not be voting for Donald Trump in November. I didn’t arrive at this decision easily, and then it took a while for me to get paid to say something. But now that I’ve signed my contract, the time has arrived for me to spew my conscience in your direction. Conservatism will never be the same.

I’ve been the intellectual and spiritual leader of what I like to call “the traditional American country-club conservative movement” since the late 1960s, when I wrote my groundbreaking book, “Free Lunch”, in which I described the moral dangers of paying taxes to fund desegregation projects. This led to the founding of Patriotism Magazine and its immortal mission of, as I put it in the founding editorial, “fostering free thought leading to the overthrow of Communism and the establishment of nice suburban roads.”

From there, I went on to host my TV show, "Friendly Fire," in which I placed liberal guests in “The Electric Chair,” roasting them alive with my Hasty Pudding-bred wit and vicious homophobic ripostes. I made Ralph Nader sob, Bella Abzug shout, and I once so angered Gore Vidal that he attacked me with a soiled plunger. Later, I went directly into government service, first for the Israeli government as an editor of The New Republic, and then for the United States government, when Ronald Reagan himself asked me to become Director Of Communication For the Department Of Secret Latin-American Proxy Wars That We’d Rather Stayed On The Down-Low For Now. In my best month, I overthrew two dictators before breakfast. My USA bonafides are for realz.

Mr. Trump lacks the character, values, temperament, experience, testicles, or, most importantly, hairstyle to be President. He appears to also lack basic knowledge of the workings of government, of the secret workings of government, of the U.S. Constitution, of the Secret U.S. Constitution, and of basic U.S. institutions like freedom of religion, freedom of expression, and an independent judiciary that you only see on weekends at the racquet club.

Donald Trump is not qualified to be Commander In Chief. He has demonstrated repeatedly that he has little or no regard for America’s vital interests such as the Middle Eastern oil fields we seized under false pretexts, our dizzying array of European military bases which are in no way outposts of empire, and our heaven-sent right to share our Netflix passwords. He praises North Korea, constantly threatens trade war with China and encourages Russian hackers to destroy U.S. government communications networks. Jesus fucking Christ, the man is a goddamn lunatic!

So now I must join my fellow Princes Of Darkness (as we affectionately call ourselves at the Bohemian Grove and the other, secret Bohemian Grove that no one knows about) in bravely condemning the greatest threat conservatism has known in our lifetimes, and in all other lifetimes in all other dimensions. Just the other week, I had catered lunch with John Bolton, G. Gordon Liddy, Lex Luthor, Skeletor, Henry Kissinger, Count Dracula, Baron Zemo, Karl Rove, Roger Ailes, and the surviving commanders from the My Lai Massacre. We all agreed that Trump is the worst man ever.

Unlike patriots such as, say, Oliver North and the entire Rumsfeld defense department, Trump is unable to separate truth from falsehood. He says he knows “more about ISIS than the generals do,” “more about cars than the Germans do,” and “more about ghosts than Scooby-Doo.” Well, if he knew the truth about ghosts — that they haunt the houses of those whose cynical realpolitik philosophies led to their extermination by death squad — Mr. Trump wouldn’t be so flippant. I constantly have to keep my pantry stocked to slake the spirits of the murdered indigenous Guatemalan family that haunts my dreams. Ghosts never let you sleep, and sometimes they drink all the water in the Brita.

Some of have doubts about Hillary Clinton. After John Negroponte asked me to sign his copy of my seminal book of political thought, The Conservative Case For Moral Assholery, at last month’s annual secret Aspen-To-Davos air rally and organic sausage roast, he and I talked about this for hours with our colleagues Charles Krauthammer, Andrew Sullivan, Andrew Ferguson, and Krautson Ferguhammer. We all confirmed, via our still-high government security clearances, that Hillary is not a murderous android from the future, despite rumors and some evidence to the contrary. Beyond that, I’m still skeptical to hand over the reins of power to a woman who once referred to me during a Congressional hearing as a “suppurating crotch wound on the body politic.”  But there’s no doubt that Clinton can at least identify Nicaragua on a map and knows the basic facts of its recent history. We can work with that. Donald Trump, on the other hand, would mistake the map for a napkin, and then would wipe his ass with that history.

Trump is not the kind of person you would want in charge of your nuclear arsenal, or of any other kind of arsenal, for that matter. My friends and I spent a lot of time setting up this world order. If a madman upsets it, it’s going to be a madman of our choosing, at a time in history that suits our purposes.

That time is not this time. When that time comes, we’ll let you know. Right now, however, it’s time for cocktails on the veranda. If history has proven anything, it is that great intellectual courage makes you need a drink. And I’ve never been thirstier in my life.