It's not just about "special snowflakes": What's missing in U. of Chicago's "no trigger warnings, no safe spaces" letter 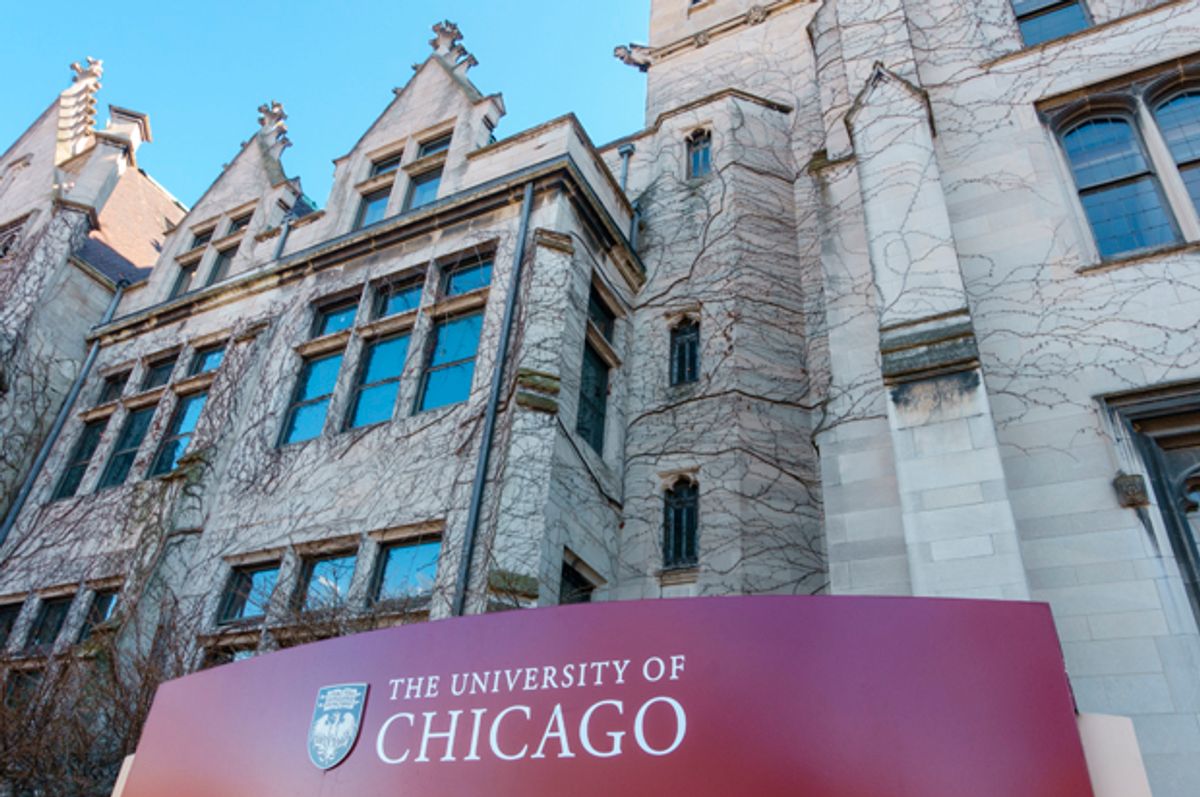 It was like catnip to all the expected troll-bait, right-wing sites. Hot Air called it "a crushing blow to special snowflakes and Social Justice Warriors." The Daily Caller crowed that it was a "massive rebuke of the ongoing trend at various schools to suppress and hide from opposing points of view." In a new letter to the incoming class of 2020, John "Jay" Ellison, Dean of Students at the undergraduate college at the the University of Chicago, told students that they should not expect any "trigger warnings" or "safe spaces" when they arrive. Included with the letter was a treatise on "Academic Freedom and the Modern University."

In the letter, Ellison pre-empted any expectations otherwise by writing that the school's "commitment to academic freedom means that we do not support so-called 'trigger warnings,' we do not cancel invited speakers because their topics might prove controversial, and we do not condone the creation of intellectual 'safe spaces' where individuals can retreat from ideas and perspectives at odds with their own."

Believe it when I say that this message, delivered by an older, straight white male, was received with inordinate glee on social media from many in his precise demographic. Interestingly, they rarely seized upon the first part of the letter, which states that "[m]embers of our community are encouraged speak, write, listen, challenge and learn, without fear of censorship. Civility and mutual respect are vital to all of us, and freedom of expression does not mean the freedom to harass or threaten others."

And the school's track record appears to put its money where its mouth is. Last year, Zineb El Rhazoui, a journalist at Charlie Hebdo, spoke at the University of Chicago — and sparked a student debate over "acceptable free expression."

Ellison, formerly of Harvard, has been at the school two years. At the time of his arrival, Dean of the College John W. Boyer praised him for his "deep understanding of the importance of the liberal arts at the center of a major research university." So it's unlikely his message was meant to be a tamping down of the "special snowflakes" — a term more often applied to females — who can't handle challenging conversation. After all, someone with a long career of academic experience would know that when you foster an environment of truly challenging "diversity of opinion," the beneficiaries are frequently the more traditionally marginalized populations. What Ellison calls the "freedom to espouse a wide range of ideas" is exactly what has driven student protest movements for decades. It's what has created more awareness and action around campus sexual assault, around racism in the Greek system, around access for transgender students. Having an environment for students to speak "without fear of censorship" is vital to progressive values. Likewise, educators need to be able to tackle difficult, nuanced issues without fear of reprisal.

So I wish that Ellison had done better in expressing these ideas. I wish that he been clearer on what he means by topics that might "prove controversial," and that he hadn't been so dismissive about "so-called trigger warnings." Hi, trauma is real! And if you want to set an example of empathy, please at least attempt to see the world through the eyes not of some determined-to-be-offended cliché, but also the returning veteran who's sitting in class. Or the sexual assault survivor. What is missing from his message is an acknowledgment that the school understands the needs and experiences of those students. As a Santa Barbara University student explained to the New York Times last year, "We’re not talking about someone turning away from something they don’t want to see. People suddenly feel a very real threat to their safety." That's a distinction worth making.

I feel strongly that phrases like "trigger warning" have been so overused that, as The Awl already said years ago, "this useful thing has spread a litttttle far afield." But I also know there's a difference between being too intellectually fragile to handle a Shakespeare play and having legitimate concerns about how a productive dialogue is fostered. And I try to be hopeful that both the administration and the incoming class of 2020 will be less hung up on imperfect buzzwords and more committed to the school's stated ideal, to "cherish the right of each member of our community, each student and each faculty member, to hold firm to her or his beliefs and principles."