The year of dark magical thinking: Unskewed reality, Hillary's health and the rise of the alt-right

How Karl Rove's 2012 Fox News humiliation unleashed Trump, Breitbart and the demons of the alt-right 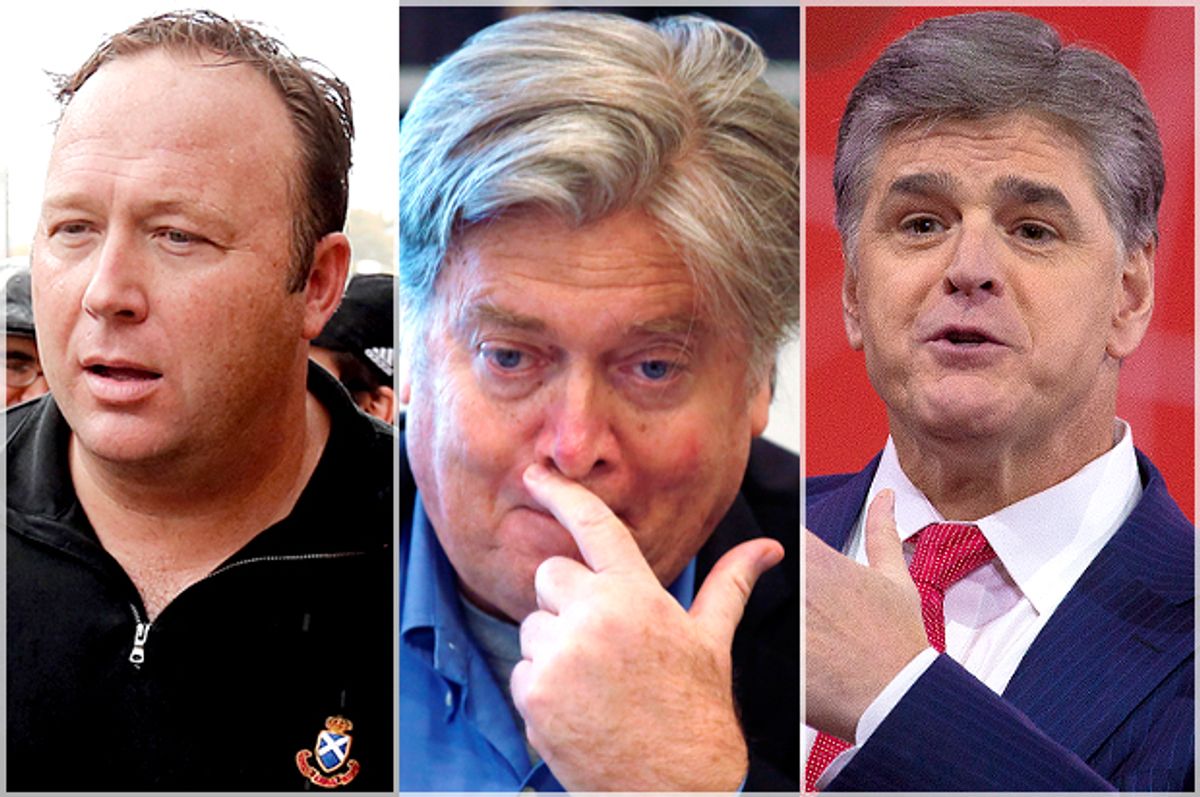 Hey, remember Karl Rove? That guy seems almost charmingly old-fashioned right now. (I said “almost.”) Amid the deepening insanity of the 2016 campaign, I keep going back to Rove’s election-night Waterloo on live TV four years ago. That was an event that reshaped the political and media landscape in ways nobody noticed for a while. It exposed previously unseen (or at least little-noticed) fault lines on the American right, it helped turn Megyn Kelly into a media superstar, and it paved the way for the post-factual reality of the Donald Trump campaign and the dark magical thinking of the ascendant conspiratorial fringe now known as the alt-right.

How did we end up in a bizarro-world electoral cycle where one candidate’s campaign is openly peddling scurrilous rumors about the other candidate’s health, and suggesting that a “mainstream media conspiracy” is devoted to covering up the truth? Where “Lock her up” and “Hillary for Prison,” a pair of memes driven by Alex Jones’ InfoWars website, became the unofficial slogans of the Republican National Convention? Where straightforward statistics about everything from climate change to the declining crime rate to the net outflow of undocumented immigrants are ignored or denied or viewed as ideological propaganda? Where emotion has entirely replaced reason? As Newt Gingrich said when confronted with actual crime data during a now-infamous CNN interview during the Republican convention, the facts don’t matter: “The average American … does not think that crime is down. People feel more threatened. As a political candidate, I’ll go with what people feel.”

How did we move from the “unskewed polls” narrative of 2012, essentially the argument that pollsters systematically overcount treasonous big-city liberals while undercounting flag-waving heartland conservatives, to an unfalsifiable unified-field theory holding that the polls are rigged and the election is fixed and the entire political process is a Soviet-style charade? If Rove and other so-called mainstream Republicans helped make this tsunami of epistemological doubt possible, they still didn’t see it coming. Now it has swept them away.

Rove was playing his customary role on Fox News that night in November of 2012, partly as a political analyst with years of trench-warfare experience and partly as an obvious surrogate for the Republican Party and the Mitt Romney campaign. Republicans had spent the latter part of that campaign cycle seeking to debunk polls that consistently showed Barack Obama in the lead. If the unskewing argument turned out to be wrong, it wasn’t inherently ludicrous: Pollsters sometimes make demographic miscalculations, and the idea that Tea Party voters and evangelical conservatives were high on hatred, while Obama’s bummed-out coalition of multiracial liberals might stay home and smoke weed, possessed a certain superficial plausibility.

Rove maintained his sunny demeanor through the early part of the broadcast, while Romney held a popular-vote lead. But after Fox’s number-crunchers called the tight race in Ohio for Obama, the jig appeared to be up. Kelly and Bret Baier and the rest of the network’s talking heads assumed their gravedigger demeanors and announced to their grieving audience that the president had been re-elected. Rove appeared taken by surprise, and after a panicky phone call from Romney HQ, he tried to unskew Fox’s unconditional surrender. Not so fast, he said; the numbers he was hearing from the Buckeye State were different. Romney might yet squeak it out, or perhaps we were heading for an all-night nail-biter followed by recounts, in the golden tradition of Florida 2000.

Kelly got up from her desk and took a camera operator with her down a long corridor and into the back room where Fox’s prognosticators at the "decision desk" were parsing the raw numbers and issuing forecasts. Based on how many votes were still outstanding in Ohio, she asked resident expert Michael Barone — who is a Reagan-era conservative, but also a confirmed data nerd — how certain was he that Obama would carry the state? If memory serves, Barone calculated that probability at 99.5 percent. By Fox News standards, it was pretty much an Edward R. Murrow moment of truth-telling. After a few seconds of shrugging and grumbling, Rove backed down, and not long after that Romney made his terse and sullen concession speech.

If you were watching Fox News that night out of morbid curiosity — or, say, because an editor told you to — it was easy to view Rove’s humiliation as a delicious Schadenfreude milkshake. But for millions of Fox’s regular viewers, who had staked their hopes on the “unskewing” narrative, it can only have been a crushing disappointment. And quite likely something more than that, something closer to a betrayal. Whose side were those Fox News people on, anyway? How could they toy with the hearts of real Americans that way? Hadn’t Rove and Kelly and everyone else on Fox promised for weeks that the pollsters were wrong and Nate Silver’s forecasts were wrong and the New York Times was wrong, and that true patriots were sure to rise from their Barcaloungers and throw the maybe-Muslim White House usurper out on his Armani-clad butt? If this was reality, it was simply unacceptable — and it had to be rejected.

Somewhere out there in Television-land, Donald Trump — and, more important, the shadowy army of Internet ghouls and goblins who now bolster his presidential campaign — vowed never to make the same mistake Rove had made. Never surrender to reality. If you don’t like what it offers you, invent a reality of your own: Make America great again! Earlier that evening, in fact, Trump himself had launched into a memorable Twitter rant when initial returns showing Romney leading in the popular vote while Obama led in electoral votes. In retrospect, it looks a lot like the opening salvo of the 2016 campaign. "The phoney electoral college made a laughing stock out of our nation," Trump wrote. "The loser one!" [Sic, sic, sic and sic.] "He lost the popular vote by a lot and won the election. We should have a revolution in this country!" Trump didn’t yet understand, I imagine, that the target of that revolution wasn’t the Democrats or the liberals or the Establishment but something much bigger: objective reality.

Karl Rove kicked open a conceptual window with his micro-rebellion of 2012, a window that had been hanging from one rusty hinge. It took others, more courageous than he, to burst through it into the brave new world of post-reality Trumpian politics on the other side. Rove had prospered in electoral politics for many years by proposing counterfactual narratives in an effort to shape perceptions and alter political reality: George W. Bush was a relatable “common man” who had won a “conservative mandate” in the stalemate election of 2000 (which he almost certainly didn’t win at all). John Kerry, who had been wounded in Vietnam while Bush was AWOL from the National Guard, was an anti-American Europhile snob who lied about his service.

But on some level Rove accepted that there was a reality out there somewhere that was worth influencing. If he thought of voters as sheeple he could bend to his will, he also believed that the results of doing so were tangible and significant. He needed to keep the result of the 2000 election close enough that it could be stolen, to put it most cynically. Four years later, he needed to mold the outcome by clouding an issue that should have been Kerry’s greatest strength and Bush’s greatest weakness — their military service records — in the context of America’s post-9/11 anxiety.

If Rove believes in nothing else, he believes in the bottom line of politics: winning and losing. When he sat back down in that Fox News chair on election night of 2012, after getting so spectacularly served by Megyn Kelly, he had the demeanor of a political pro: Dammit, we lost this round. He didn’t like it and I suspect he had actually convinced himself it wouldn’t happen. But to use the operative cliché, it was what it was.

It took an invasion of barbarians from the far-right fringe, like Alex Jones of InfoWars and Tom Fitton of Judicial Watch and Steve Bannon of Breitbart News (now the Trump campaign’s CEO), along with quasi-mainstream fellow travelers like Sean Hannity and Ann Coulter, to follow Rove’s breakthrough to its logical conclusion. From their point of view, Rove had finally revealed himself as a cowardly sellout, accepting lamestream media “facts” (such as who got more votes in Ohio) as if they were actually “true.” They boldly proclaimed an unskewed reality, in which nothing ever was what it was. Facts and data and statistics were liberal lies or distortions, bought and paid for by “Crooked Hillary,” Barack Hussein Obama and the Islamo-socialist-lesbian clone army. I’m improvising here, but you get the point.

So Hillary Clinton, in unskewed-reality world, is critically ill with various seemingly unrelated ailments: mouth cancer, brain damage, a seizure disorder and an unspecified respiratory disease. She is unlikely to make it to Election Day, and certainly won’t be able to serve a full term as president. (Has it occurred to the unskewers that if this turned out to be true, the Democrats could nominate someone else — probably Joe Biden or Tim Kaine — and that person would likely defeat Donald Trump even worse than Hillary will?) Meanwhile, on our southern border, Islamic terrorists are “teaming up with Mexican drug cartels to infiltrate and attack the U.S.” Crime is skyrocketing, unless you choose to believe liberal establishment sources, such as the FBI.

Polls showing Trump well behind Clinton in every important swing state are of course bogus, because there are millions of “undercover Trump voters” from coast to coast who decline to reveal themselves to pollsters or the media. It follows, therefore, that if Trump appears to lose to the fearsome witchery of Hillary Clinton in November (despite her near-death condition), those results are obviously fraudulent as well. Yes, the lies and distortions practiced by the Republican Party for a generation or more have made this all possible, but the alt-right earthquake of 2016 is a dangerous situation with no obvious precedent. For the movement’s shock troops, only one outcome is acceptable, and it goes well beyond the fate of Donald Trump. They want to subvert both reality and democracy, and replace them with other things they like better.