Beyond "no justice, no peace": In case after case, cops shoot black people and walk away. What can we do?

Cops who shoot unarmed black citizens are rarely even charged -- and never convicted. I'm running out of answers 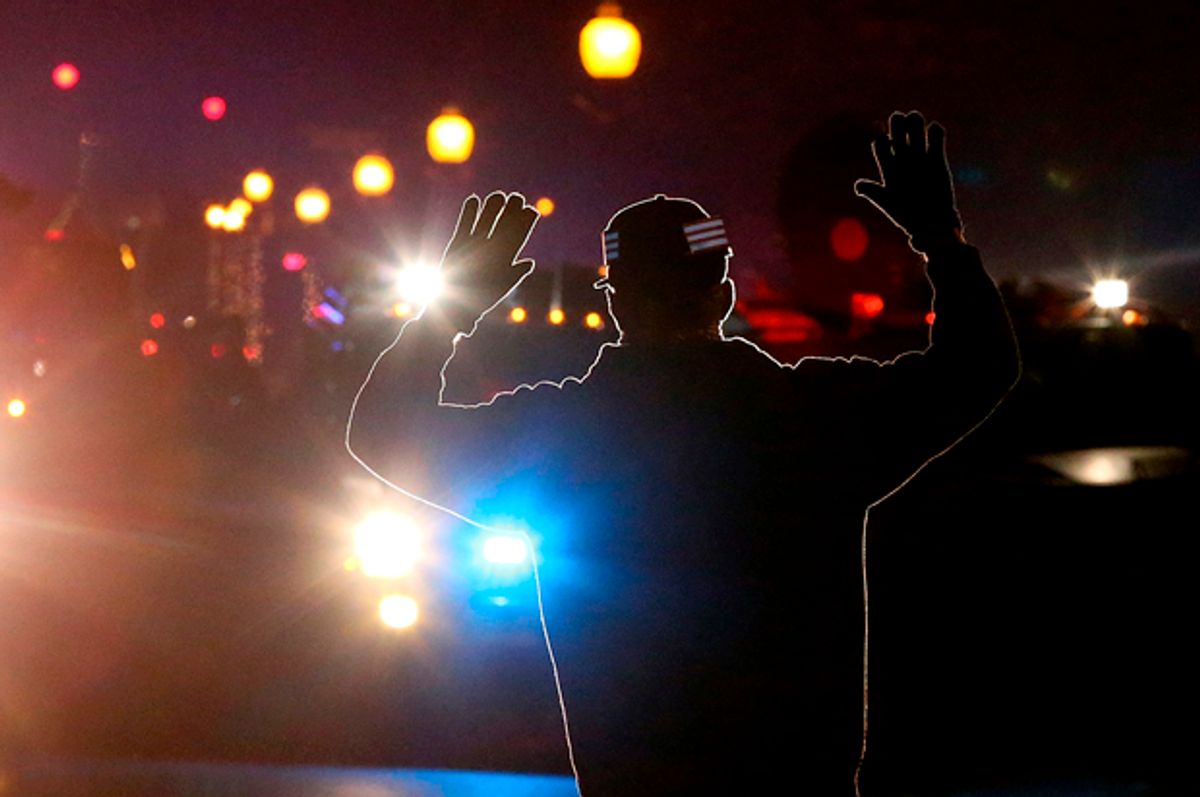 What’s an activist to do? We fight, we plan, we petition, we strategize -- and for what?

Last week, Baltimore County released a statement saying that charges will not be filed against the officers who shot and killed a 23-year-old woman named Korryn Gaines. According to prosecutors, who presented conflicting evidence -- the officer who shot Gaines first said he feared for his life, before flip-flopping and saying he feared for the life of his colleague, who wasn’t in Gaines' view -- the fatal shots were justified.

On Aug. 1, a group of Baltimore County police arrived at Gaines' apartment in Randallstown, Maryland, to serve a warrant for a traffic violation. Gaines refused to let them in -- the distrust of police officers has become standard in many black communities, for obvious reasons. According to police officers, Gaines threatened them with a shotgun. The cops fired, she shot back­­ and the cops returned fire, ultimately killing Gaines and wounding her 5-year-old son, Kodi.

As usual, the police officers investigated themselves and magically found themselves innocent. It’s crazy how in the era of robots armed with tear gas and guns with rubber bullets and Tasers, death was the only option for a woman holding a 5-year-old child.

What’s worse is that we had to receive that news on top of a disgustingly bloody week in police shootings. As we learned the facts about Terence Crutcher, who was guilty of nothing and shot dead in cold blood on Sept. 16 in Tulsa, Oklahoma, we were slapped with Keith Lamont Scott, killed in Charlotte, North Carolina, just four days later. Between the time I wrote a first draft of this story and the day it was published, another unarmed black man was killed by a cop: Alfred Olango, in El Cajon, California.

Officer Betty Shelby, the Tulsa shooter, has been charged -- but only with first-degree manslaughter, a charge she will probably beat. That honestly seems like a P.R. move to quell any potential unrest in Tulsa. Scott’s death sparked an uprising that led to a mandatory curfew in Charlotte, and I can’t help but think that played a role in Shelby’s charges.

I remember the pride we felt when the six Baltimore officers responsible for the death of Freddie Gray in April of 2015 were charged. Cops are never charged; suddenly we had cases open on six of them! For the first time in my adult life, I witnessed black people expressing faith in the justice system. We didn’t retreat after the charges were filed -- grassroots activists and organizers from every corner of Baltimore put pressure on the politicians, the business owners, the nonprofits and cops throughout the trials. What did we see? One cop walked, then another, then the next. The Baltimore City police union passed out T-shirts reading "6-0," as if to celebrate the idea that murdering an unarmed black person is OK, even a laughing matter. We played by the rules and organized, only to get served illusory charges that could never stick. We saw the same thing happen in a different case in Charlotte, well before Keith Scott.

A Charlotte officer named Randall Kerrick was charged with murder in the September 2013 death of Jonathan Ferrell, a former college football player for Florida A&M. Ferrell, a black man who was not armed, was in a car accident and knocked on a stranger’s door for help. She called the police; Kerrick arrived, saw black skin and shot Ferrell 10 times. Kerrick was charged with voluntary manslaughter and indicted by a grand jury on the second attempt. A year later the trial ended in deadlock and Kerrick walked away, just like the killer cops in Baltimore. Kerrick also received $113,000 in back pay in addition to $50,000 in civil attorney’s fees.

I’ve studied the Civil Rights Movement for years. I acknowledge the progress we have made. But then I flick on the TV only to see people like Alton Sterling, Philando Castile, Freddie Gray, Walter Scott, Mike Brown, Jonathan Ferrell, Keith Scott, Terence Crutcher, Alfred Olango and too many other names to count -- people that look like me murdered every week, on top of the other social ills that infect black communities throughout the country.

So what are we doing wrong? What are we missing?  Marching, organizing, protesting -- even setting buildings on fire -- don’t work. None of these lead to convictions or even alter the shoot-first-when-they're-black perspective of too many police officers.

We can’t afford to lose hope. There are too many children who want to succeed. They deserve better than what the current system is offering and what we are delivering. We are also responsible for acknowledging that our current efforts aren’t working, and that parsing movements of the past is not enough. So I ask, what’s next? How do we move forward? If we can't convict cops for murder and we can't get justice and we don't think violence will work: Seriously, what are we to do?