Breaking: "There shall be no debate — It's not a presidential campaign until I cover it!" The Greatest Living American Writer 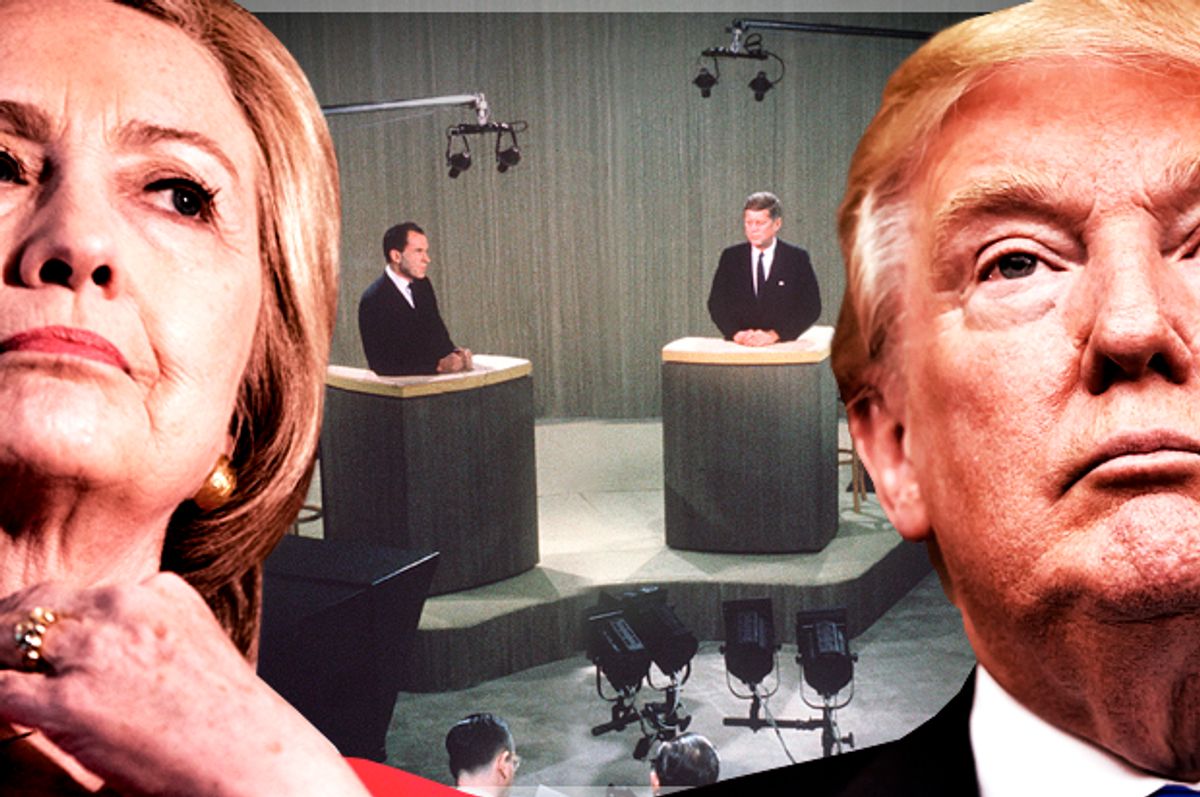 Like a well-endowed comet, I return every four years to cover the presidential election. Ten days ago, I was at Hofstra University, alma mater of labor leader Jimmy Hofstra, on assignment for The Bungler, a sophisticated literary magazine. I realized it would be difficult to limn meaning from the first Trump-Clinton debate, a contest barely more sophisticated than the average episode of "America’s Got Talent," but I — and I alone — had the chops and the vocabulary.

As I sat in the press room alongside 200 bespectacled trigger warnings, I glowered in satisfaction. This was just like I had predicted in my 1997 Harper’s essay, "It Can’t Happen Here Until It Does and Even Then It Might Not Totally Happen."

No one has more experience covering debates than I do. I was there on speed for The Washington Post in 1988 when Lloyd Bentsen crepuscularly called Dan Quayle “no Jack Ruby.” I perspired like a stoned rat along with Dick Nixon in 1960 while scribbling for The Partisan Review. In my landmark 1972 book of political essays "Loathing Fear While Making and Unmaking The President on the Bus," I wrote, “give me back my Quaaludes and acid, Muskie. McGovern will wipe the floor with your ass!”

Slate.com afforded me the privilege to get drunk while witnessing Barack Obama saying to John McCain, “Make room for mack daddy, you flatulent old goat,” and I was soaring on E for The New York Times Magazine in 1996 when Bill Clinton said to Bob Dole, “Here, let me hold that pencil for you.” My New Republican memory, such as it is, even recalls 1912, when President Taft said to Teddy Roosevelt, “Are you going to finish that sandwich?” Back then, doctors called cocaine Coca-Cola.

I even have a wealth of my own televised debating experience. In my first prime, writing wasn’t simply Jonathan Safran Foer skipping in the daisies. Literary men attacked one another on national TV for sport.

Those were the days.

This year’s first debate contained more than its share of memorable quotations, like when Donald Trump said “wrong!” and “I made poo-poo in my diaper.” Then, just like in the Lincoln-Douglas debates, the entire enterprise hinged on fat shaming a Venezuelan beauty queen. From Clinton’s shoulder shimmy to Trump’s cocaine sniffles to Holt’s paper-shuffling blisters, it was all ludicrous performance art to distract us from the miserable realities of late-stage capitalism. Then again, isn’t everything? They didn’t even discuss the most important issues of the day: global warming, poverty, immigration, or whether white people are racist for criticizing "Luke Cage."

“Who the fuck are you?” he asked. “Someone get rid of this jagoff.”

I fled from his goons, notebook in hand, and headed back inside, where Chris Matthews was gently stroking Hillary Clinton’s hair, calling her “the softest president since JFK.”

“Secretary Clinton!” I shouted. “Why did you cheat on your husband during Benghazi while also hiding 33,000 emails?”

"Who the fuck are you?” she asked. “Someone get rid of this jagoff.”

The presidential debates, I then realized, are a meaningless dog and pony show, only with no dogs, and no ponies. The circus has sold out and the people can no longer afford bread. It is a bright cold day in October, and the clocks are striking 13.

Nevertheless, on Sunday the battle will be joined anew. Once again the great orange baboon orangutan gorilla man will stride the stage, breathing twitchy fire, to face off against global capitalism’s fairy grandmother. They will dance like monkeys for our amusement and you will sit on your couches, fretting over the outcome like viewers of the telenovela I once wrote and starred in, “The Emasculation of Señor Businessgaucho at the Hands of a Superior Lady.” Things will be said, destinies will be shaped and the working class will be condescended to while the ship of state continues to sail toward the iceberg and then off the edge of the world.

I’ll be there live-blogging the proceedings for BuzzFeed. It’s the smartest hire it’ll ever make. No one’s coverage will be finer, more precise and sexier.

For I am now and will always be The Greatest Living American Writer.