Steve Bannon has called himself a "Leninist," and the ludicrous comparison isn't quite as stupid as it sounds 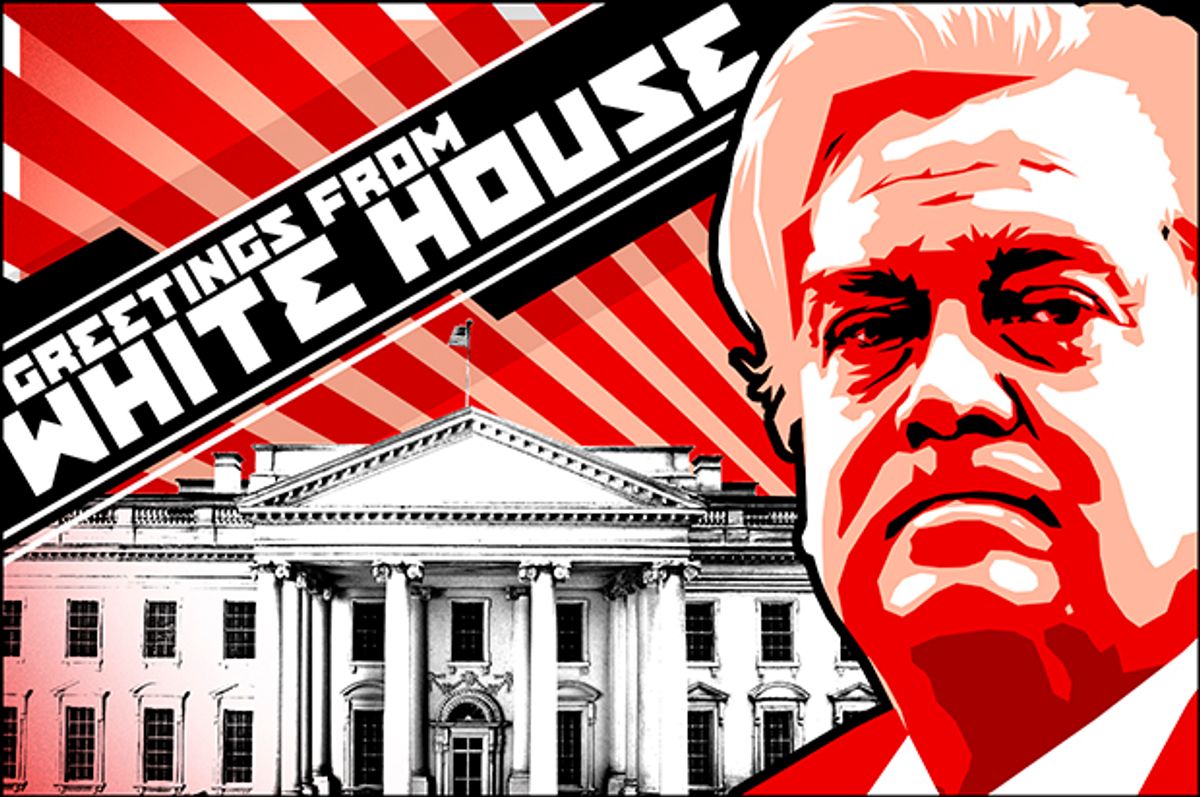 Steve Bannon, the former head of Breitbart News who is now President-elect Donald Trump’s bullshitter-in-chief — not an official title, although it should be — has been called many things in the past couple of weeks. According to many people who evidently don’t care for him, Bannon is a racist, a white supremacist or a white nationalist (which are not all the same thing), and may also be an anti-Semite and a misogynist. These epithets may or may not be accurate, but they strike me as giving off more heat than light. They provide very little information about what sort of person the incoming White House strategist might be, or what he might want.

According to the somewhat reliable testimony of writer Ronald Radosh, Bannon has embraced one unlikely “-ist” label. At a book party at Bannon’s Capitol Hill townhouse in November 2013, Radosh recounted in the Daily Beast, Donald Trump’s future Svengali referred to himself as a “Leninist.” We’ll get back to the details of Radosh’s account, but Bannon has not denied it, saying only he doesn’t remember the conversation. So let’s take Bannon at his word, sort of, or at least figure out what kind of Leninist he is. The parallels between the Trumpian mastermind and the man who shook the world are instructive, as are the differences.

In a bizarre example of history’s sense of humor in action, the election of Donald Trump coincided precisely with the 99th anniversary of the Bolshevik seizure of power. No, I’m not kidding: To the day. That event is often called the October Revolution, but when you coordinate the dates on the old-style Russian calendar used at the time with the calendar we use now, the fall of the Winter Palace in Petrograd to Bolshevik forces happened on Nov. 8, 1917.

We know what Lenin wanted when he took power after that, pretty much. It didn’t work out too well. (Without going too deep into the historical weeds, I’m taking the straightforward position that Lenin did not envision or want a one-party totalitarian state extending into the indefinite future.) We don’t really know what Bannon wants, except power — which he now has. Both men were members of the educated elite who became leaders of “revolutionary vanguard” movements that represented a highly motivated minority. Both perceived a “revolutionary situation” that was at once national and global, a moment when the existing political order was far less stable than it appeared to be, and could be overturned by applying the right degree of pressure in the right places.

Both Lenin and Bannon were thrust into positions of power unexpectedly, before objective conditions appeared “ready,” although the specifics are different in important ways. Although Lenin was not the only public face of the Bolshevik Revolution, he was its acknowledged leader and principal theoretician. No one else could possibly have seized the reins of the newborn Soviet state, or have kept it alive for more than a few months. Bannon is the power behind the throne in a much murkier arrangement, where the outward forms of democracy must be maintained even though the new regime and its supporters openly yearn for a different direction. (You know where I’m going with that — but I won’t use the word!)

That unpreparedness — that sense of a revolutionary movement gathering uncontrollable and unpredictable momentum, in a context of political chaos — had well-known historical consequences in the first instance, even if scholars continue to argue about them a century later. What will the consequences be for Steve Bannon and his free-range figurehead, neither of whom had any reasonable expectation of ending up where they are today?

On the most obvious level, Bannon’s remarks to Radosh were just bravado. For the media godfather of the alt-right — which is, yes, a new word for the isolationist and white-supremacist Old Right, but also somewhat more than that — to compare himself to the leading revolutionary theorist of the 20th century is self-serving bullshit. What a shock! In typical fashion, Bannon was trying to outrage Radosh, and everyone else within earshot. He yearns to outrage the left at every opportunity, of course, and aligning himself, however facetiously, with the most controversial figure in its ideological history is a terrific way of doing that. Lenin in a sense marks the left’s weakest spot, the moment of its most visionary fervor and the moment where it tipped over into authoritarian terror.

But Bannon also enjoys outraging nearly every sector of the right except his eager-beaver followers, and the specter of Lenin embodies everything regular-order conservatives claim to fear and despise: violent revolution, the overthrow of the old order, endlessly metastasizing state power. (Whether the right really hates state power is another story.) When Radosh wrote to Bannon to seek confirmation of their 2013 conversation and brought up tactical criticisms raised by conservative economist Thomas Sowell in the National Review, Bannon replied: “National Review and the Weekly Standard are both left-wing magazines, and I want to destroy them also.”

There’s clearly an element of prankish performance art at work here, a liberal-arts sophomore’s yearning to épater le bourgeois, as Steve Bannon understands le bourgeois (anyone and everyone who doesn’t think he’s awesome). To use a curiously appropriate analogy, Bannon often seems like a guy who attends a KKK rally wearing a Black Lives Matter T-shirt. People would figure out that he was either cracking some kind of elaborate joke or looking to get his ass kicked, or both. But they wouldn’t really get it.

But as you can already tell, I am here to argue that the Lenin comparison is not entirely ludicrous and Bannon is not a total idiot. I believe he’s wrong, on various levels. Whatever you think of the state he enabled (i.e., it turned out really badly), Vladimir Ilyich Ulyanov, aka Lenin, was a political genius whose analysis of the crumbling economic and political order of the pre-World War I era was keenly accurate and often eerily prescient. Despite his alarming record of political success to this point, Bannon really doesn’t rise to that level. He is more like a shrewd operator and an opportunist. (Admittedly Lenin was those things too.)

I also hope Bannon is wrong, needless to say. People don’t know much about Lenin these days, for understandable reasons. His revolution, which aimed at liberating the world and sweeping away all forms of oppression, rapidly turned on itself in one of history’s most dreadful ironies, creating a more repressive regime than the one it overthrew. But the Bolshevik founder really did transform the world, if not at all in the way he originally intended, and left behind deep historical and political scars that are nowhere close to healing.

It’s not irrelevant at all that Lenin and Bannon are ideological opposites — even if Bannon, because he is a cynical bullshit artist, might well argue that it is irrelevant, or even that they are not ideological opposites. I don’t just mean that Lenin was a passionate believer in socialism (or in “social democracy,” the term he used for most of his career) and Bannon is a passionate believer in — well, in something else, or quite likely nothing at all. More to the point, Lenin’s ideology was overt and public, whereas Bannon’s is a political black box. (Of course it’s tempting to apply the F-word, but I don’t know whether it fits, and neither do you.)

Whatever misdeeds you want to hang around the Bolshevik founder’s neck (and there are plenty), Lenin was not a cynical bullshitter and not given to deceit or dissimulation. Lenin told everyone who would listen, from the Marxist underground to the Tsarist secret police, that he wanted to overturn the corrupt and autocratic Russian state and replace it with a “dictatorship of the proletariat,” which wasn’t supposed to sound as scary then as it does now.

What does Steve Bannon want? Radosh remembers him saying, “Lenin wanted to destroy the state, and that’s my goal too. I want to bring everything crashing down, and destroy all of today’s establishment.” That leaves the follow-up question unanswered: What happens after that? A dictatorship of who, or what? I would speculate not only that Bannon didn’t expect Trump to be elected president but also that he didn’t want him to. Subverting and destroying the Republican Party certainly seemed a more realistic goal for 2016; the purged and cleansed party could then be redirected toward its alpha-male, un-cuckservative future, behind a more plausible and competent post-Trump candidate.

But a funny thing happened on the way to the New Order, and the accidental and startling parallel between Lenin and Bannon came to hilarious fruition on the morning of 11/9. In his monumentally researched intellectual biography “Reconstructing Lenin," Hungarian scholar Tamás Krausz argues that Lenin believed the “bourgeois revolution” earlier in 1917 would probably lead to years or decades of multi-party democracy, and that socialism would reach Russia organically, and only by way of full-scale European revolution. Events got in the way of that utopian vision, and he found himself in the Kremlin after Nov. 8, consolidating power by any means necessary against multiple waves of enemies. I’m not apologizing for Lenin’s words or actions in saying that he would view Steve Bannon with utter contempt (mingled with grudging tactical admiration). If the Soviet founder could muster the historical dispassion to issue some advice, it might be this: Be careful what you wish for.