A history of hate: Long before Trump, white nationalists flocked to Ron Paul

In our next installment, Ron Paul's presidential campaign becomes the breeding ground for 50 shades of cray-cray 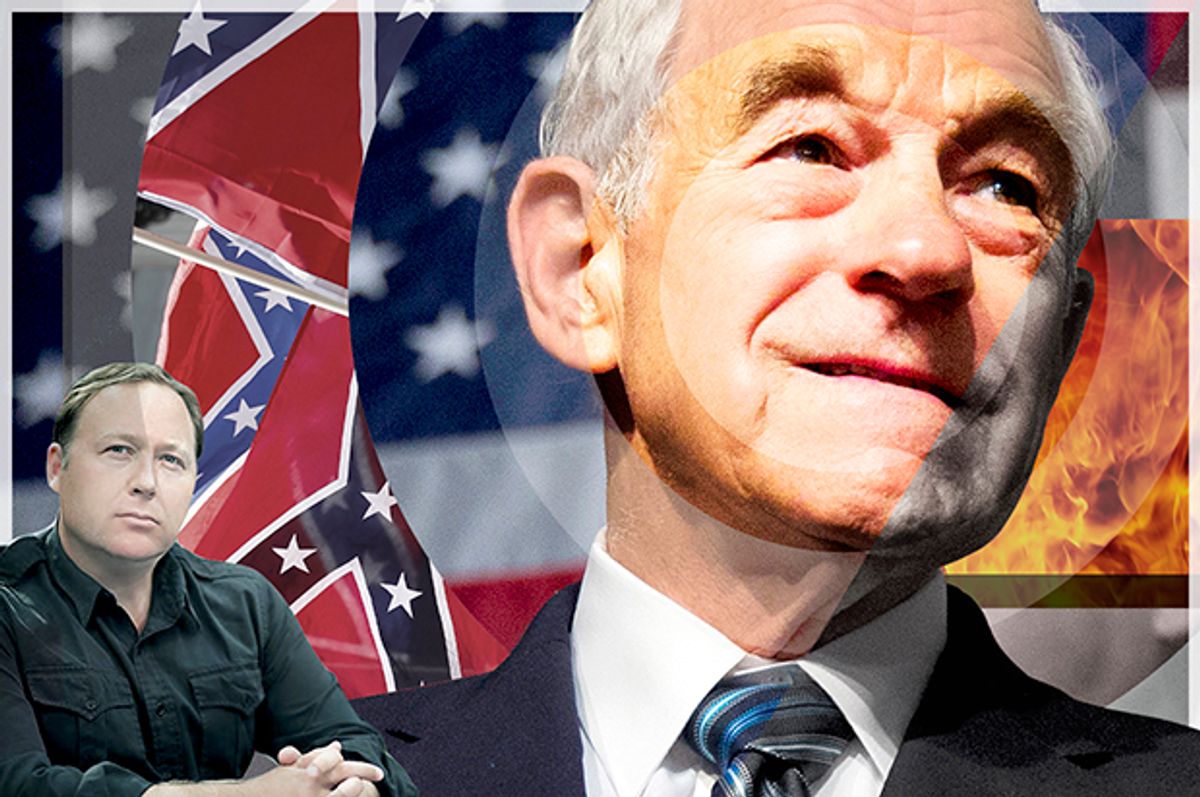 Read the first installment of our series on how the alt-right became racist: Part 1: A short history of hate

While future neo-Nazi Richard Spencer was struggling with white nationalism in the world of political journalism, most of the people who would later comprise the alt-right’s online shock troops were involved in a different venture: fighting to make former Texas congressman Ron Paul the Republican presidential nominee, first in 2008 and again in 2012.

“We were all libertarians back in the day. I mean, everybody knows this,” he said on an alt-right podcast last month. After Paul's second campaign failed, Enoch completely disengaged from politics, he added.

Paul was also the favorite of Paul Gottfried and Spencer, the two men who created the term "alternative right" and formed the annual conference where old-school right-wing racists met and mentored young and disaffected conservative intellectuals.

The Texas congressman was also the preferred candidate of Jared Taylor and the readers of his white nationalist website American Renaissance. That feeling of admiration was apparently mutual. In the 1990s, Paul in his famously racist newsletters repeatedly promoted Taylor as part of a "paleolibertarian" strategy designed to attract racist white people. (Paul subsequently denied writing them, however.)

Later on, American Renaissance wrote a featured article stating that “the race-realist section of the blogosphere is one of the most enthusiastic sources of support for Mr. Paul” and praised his “good instincts on race,” despite the fact that the author believed that Paul was no longer interested in catering to overt racists, as he formerly had.

Paul had non-racist supporters as well who would later become alt-right figures. (The self-described neo-Nazi types refer to them as "alt-lite.") Libertarian radio host Alex Jones of InfoWars, famous for his belief in lizard people and his elaborate 9/11 conspiracy theories, dislikes being identified with the alt-right. But he is an important figure in the movement's history and a key link from Ron Paul to Donald Trump. Today Jones is known today as an ardent Trump supporter but his affection for Ron Paul and his son, Sen. Rand Paul of Kentucky, was even greater while they were running their respective presidential campaigns.

In the 2008 and 2012 presidential campaigns, Ron Paul was also by far the preferred presidential candidate of the racist Politically Incorrect board known as /pol/ on 4chan. Throughout both of his unsuccessful runs, the forum served as a critical organizing portal and talent incubator for Ron Paul's youthful, tech-savvy supporters to pull off fundraising and digital feats that many political observers incorrectly attributed to his official campaign staff.

The energy and enthusiasm of /pol/ and its associated imitators and rivals completely disappeared after Ron Paul's candidacies ended. He did manage to become a meme within the site, however. The digital shock troops who would later become the alt-right were waiting for someone to re-energize them.

Rand Paul’s staff hoped that he’d be able to build on his father's success in 2016. It didn’t happen, however. In some part, that was because the senator couldn't galvanize the emergent alt-right after he started pushing anti-racist policies and rhetoric.

It was a road that the younger Paul headed down after he faced an uproar in 2010 for saying that he opposed the Civil Rights Act’s public accommodation provision, which requires most private businesses to serve customers regardless of their race. Paul retracted the stance and began a minority outreach program. He also began telling his fellow Republicans that they could not remain a party exclusively for white people.

He has stuck to his new position, even in Republican presidential debates. Sen. Rand Paul has repeatedly embraced the campaign to equalize criminal sentencing, particularly for drug offenses, for whites and nonwhites. He has also called for police to wear body cameras when on patrol and for local governments to stop using law enforcement as a revenue generator, both positions favored by Black Lives Matter activists and mainstream libertarians like those writing for Reason magazine.

None of that went unnoticed by the online racists who formerly had supported Rand Paul's father, especially since they had found a new champion in Donald Trump, after he descended his golden elevator and denounced Mexico for sending drug dealers and rapists across the U.S. border. As one of them put it on his personal blog:

Ron Paul’s performance in the 2008 and 2012 elections was due to disaffected voters, including many White Nationalists who supported him, not ideological libertarians. All those people have since abandoned Rand Paul and thrown their support behind Donald Trump because of his foolish decision to go "mainstream."

During the 2016 presidential election, Jones and his team supported the younger Paul for the GOP nomination until the very end of his short-lived bid. Shortly after Trump declared his candidacy, Jones’ top lieutenant created his own anti-Trump conspiracy theory, declaring the former television star to be a “stooge” for Democrats, designed to make the GOP lose to Hillary Clinton. In January shortly before the Iowa caucuses, a distraught Jones pleaded with Paul to come up with a possible strategy to save his campaign. “I’d really like to see you as president,” Jones said. “How do we get you elected president?”

With 16 other Republican candidates competing in the Iowa caucuses, Paul's loss of the white nationalists doomed his chances in the Hawkeye State, where every sliver of vote share mattered greatly. In the words of an anonymous Paul campaign strategist quoted by Politico: "Trump got in, Trump zoomed ahead, we collapsed, he had a massive impact in caging our people from us."

Part 3: How the GOP’s endless battles over “true conservatism” generated a movement it couldn’t control