A hero of real news: Amy Goodman and "Democracy Now!" celebrate 20 years of fearless journalism in the age of lies

"Democracy Now!" was at Standing Rock before the mainstream media even knew about it — and that's nothing new 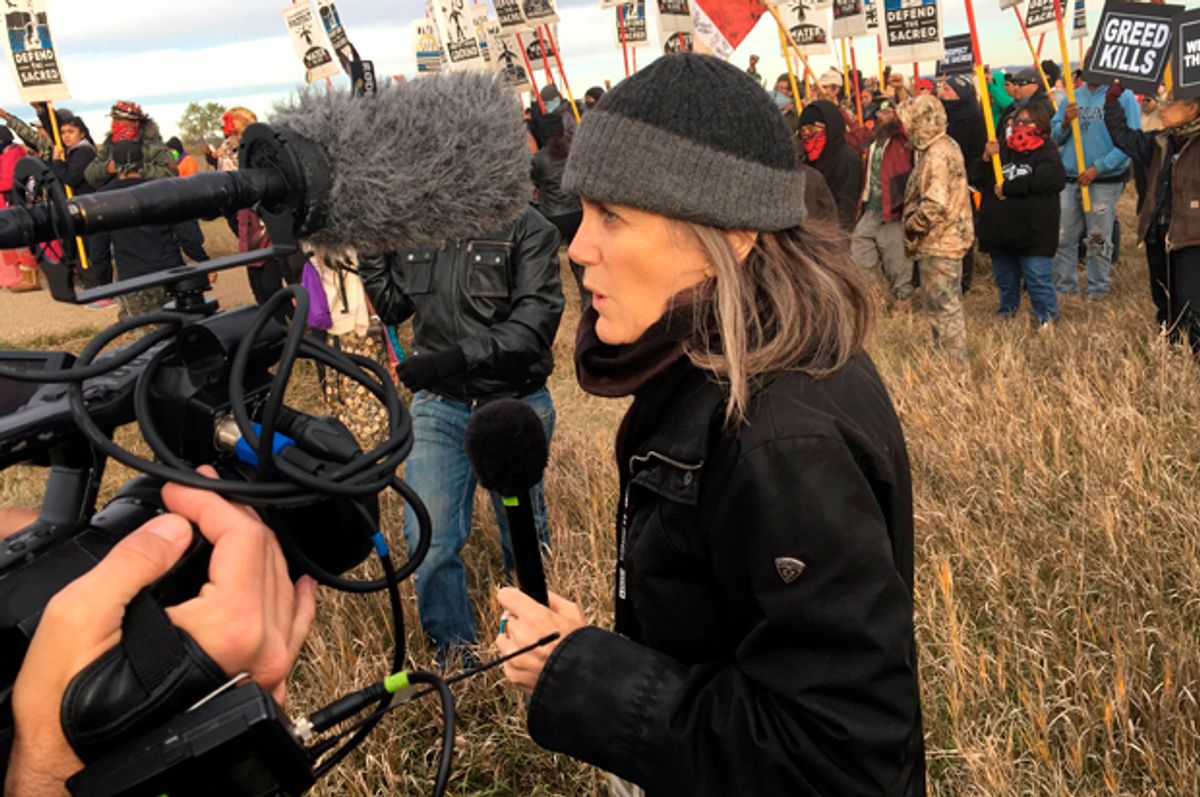 On Monday night in Harlem about 2,000 people zigzagged in lines outside Riverside Church. It felt like the wait before a rock concert and it kind of was: Patti Smith was scheduled to play, along with Rage Against the Machine guitarist Tom Morello. But the headliner was not a rock star but an unassuming journalist named Amy Goodman, founder and host of the independent news program "Democracy Now!"

Rolling Stone’s Matt Taibbi recently called Goodman “as close to the ideal of what it means to be a journalist as one can get in this business.” In this age of fake news and a president-elect whose pathological lying is thoroughly documented, ordinary people, revered journalists and celebrities alike turn to Goodman because they see her as a guardian of truth. Goodman also has something akin to the outsider appeal and integrity of Sen. Bernie Sanders: Her daily news program is 100 percent supported by listeners, viewers and foundations, not by advertising or corporate sponsorship.

I squeezed between church pews, asking regular people what brought them to the 20th anniversary celebration of "Democracy Now!"  Two young artists said Goodman “gives voice to struggling people from all over the world.” A middle-aged teacher explained that Goodman offers “relevant information you can’t find anywhere else.” Working people, retirees and folks of various ages, gender identities and races seem to say the same thing: "Democracy Now!" is one of the few strongholds of “real news.”

The recent victory of Native Americans against the Dakota Access pipeline — conditional or otherwise — can be directly traced back to Goodman’s early reporting from the Standing Rock Indian Reservation in North Dakota. Weeks before the mainstream media bothered to take notice, she and the "Democracy Now!" team filmed security guards unleashing dogs and pepper spray on the peaceful "water protectors." The footage went viral, receiving more than 14 million views, and was shared on nearly all the mainstream media outlets, including CNN, NBC and CBS, once they had no choice but to cover it.

A September Gallup poll showed that America’s trust of mainstream media has sunk to an all-time low. Only 32 percent of Americans surveyed professed a “great deal” or “fair amount” of trust in mass media. While CNN, MSNBC and ABC News iced out Sanders and appeared to cover Donald Trump 24/7, "Democracy Now!" held substantive debates between Sanders and Hillary Clinton supporters that illuminated the differences between the two Democratic candidates. It's tempting to speculate that if all Americans had been watching "Democracy Now!" Sanders might now be our president-elect.

Back in Harlem, the church lights dimmed and a video montage played — a highlight reel of Goodman’s coverage, from the 1991 East Timor independence movement and the 2008 Republican National Convention to this year's pipeline protests and everything in between. What’s significant about the reports of those three events is that in each case Goodman risked death or arrest simply in order to point a camera at real people and real problems. Goodman’s 20-plus years of fearless reporting and unquestioned integrity distinguishes her, for many people on the left, as a journalist to trust in face of a bewildering Trump presidency.

Our collective grasp of reality is under attack: In an eye-opening piece, Think Progress warned that Donald Trump’s random, inconsistent and ridiculous lies are not accidental; they’re a strategy to control the public by making us collectively misinformed, confused and divided. According to a poll from BuzzFeed News, fake news headlines fool American adults about 75 percent of the time. Now more than ever, independent journalism demands a strategy built around championing the truth and the people willing to tell it.

Needless to say, "Democracy Now!" isn’t perfect. One downside of real news is that it can often be depressing. The news program opens a window into the ugliest horrors confronting the world today — from American police brutality to air strikes in Syria. In a thorough review of "Democracy Now!" Daily Kos concluded that the show “appeals to people who already self-identify as progressive, but is unlikely to convince people who are not.” At a time when we are tragically siloed in our partisan bubbles, it’s hard to know how Goodman can capture the hearts and minds of center-left Democrats, let alone people on the right.

In Harlem people in the church on Monday jumped out of their seats to give a standing ovation to Noam Chomsky, linguist, author and preeminent public intellectual. At age 88, Chomsky had no time to mince words. He warned darkly that “the threats that we now face are the most severe that have ever arisen in human history. They are literal threats to survival: nuclear war, environmental catastrophe.”

How can the media empower the public to form a consensus around difficult truths — such as the urgent threats posed by climate change — in order to save our planet and our species? "Democracy Now!" offers one possible model, although certainly not the only one. It represents the largest public media collaboration in the U.S., aired by nearly 1,400 radio and television stations across the globe and available free online. It took Sanders decades in public life — effectively saying the same things over and over — before large numbers of people paid attention. Perhaps after 20 years on the job, Goodman is well positioned to lead a media revolution, one in which we demand that our news stands truthful, independent and fearless in the face of lies.