Trump's war on women: 3 key team members have been accused of physical or sexual violence against women

That includes the president-elect himself 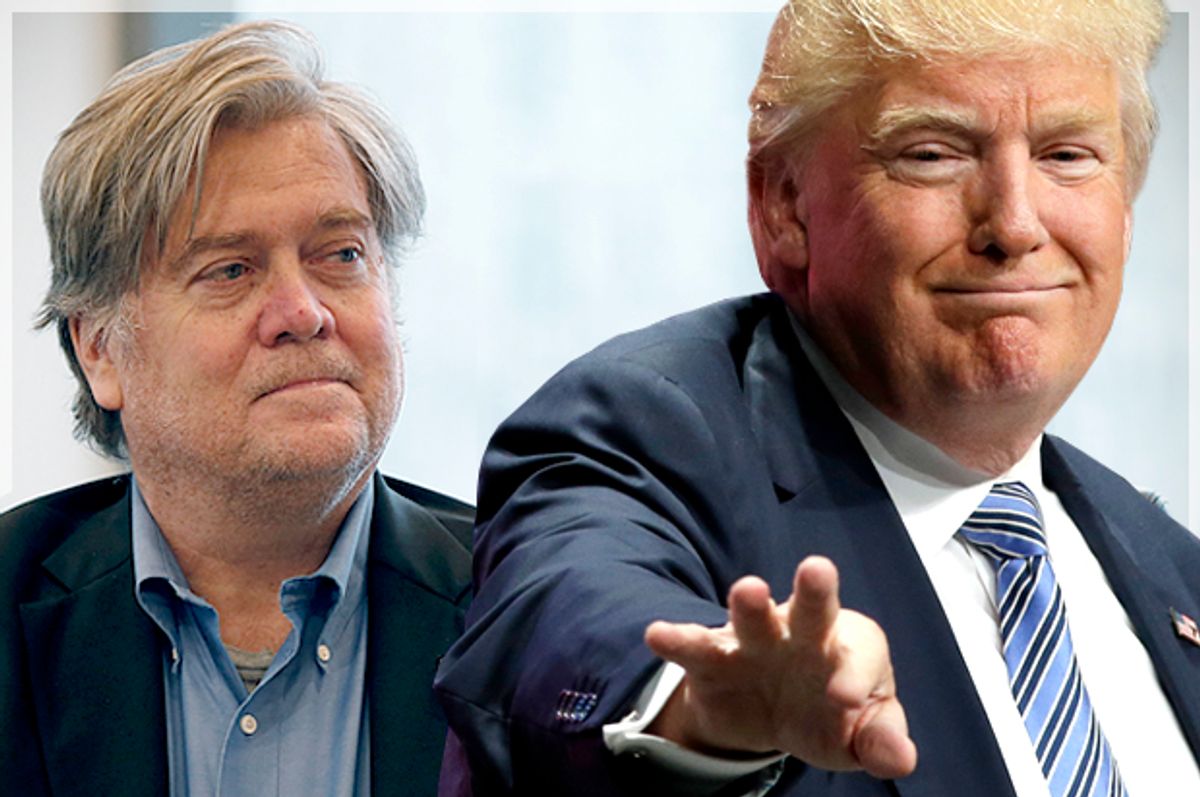 As Donald Trump continues to put together his inner circle — including conspiracy theorist, Islamophobe and white nationalist champion Michael Flynn as national security advisor, school privatizer and public school opponent Betsy DeVos as secretary of education, climate change denialist Scott Pruitt as head of the Environmental Protection Agency and entrenched Wall Street money man and former Goldman Sachs executive Steven Mnuchin as treasury secretary — a whole other troubling pattern has emerged. Aside from a number of figures tied to financial corruption and white supremacist groups, the Trump team includes three key players who have been accused of abusing women.

There’s Steve Bannon, the white nationalist sympathizer and propagandist who boasted that under his leadership, Breitbart News became the “platform for” the white supremacist “alt-right.” In an 1996 police report, an officer wrote that Bannon’s ex-wife Mary Louise Piccard claimed Bannon grabbed her by the neck in the middle of an argument. Bannon was charged with domestic violence, misdemeanor witness intimidation, and traumatic injury and battery. He pleaded not guilty to those charges, which were dropped when Piccard didn’t show up for a court date.

Andrew Puzder, the anti-labor fast-food titan and minimum wage opponent who Trump has appointed labor secretary, was accused of spousal abuse by his wife of 16 years, Lisa Henning. During the couple’s divorce in 1989, Henning stated that Puzder had attacked her on multiple occasions, once punching her as they rode in a car together. New York Magazine also points to an incident alleged to have taken place in 1986:

"Henning said Puzder 'attacked me, choked me, threw me to the floor, hit me in the head, pushed his knee into my chest, twisted my ar​m and dr​agged me​ ​on the floor, threw me against a wall, tried to stop my call to 911 and kicked me in the back.' Afterward, the couple signed a mutual consent order that prohibited Puzder from entering the second and third floors of the couple’s house and Henning from going into the basement."

Trump himself has been accused of abuse my numerous women, including his first wife, Ivanka. In a sworn deposition from their 1992 divorce, the former Mrs. Trump claimed that the president-elect — in a fit of rage after a painful hair transplant procedure — began “ripping out [her] hair by the handful” before violently raping her. She later recanted via a letter sent by Trump’s lawyers, which stated, “during one occasion in 1989, Mr. Trump and I had marital relations in which he behaved very differently toward me than he had during our marriage. As a woman I felt violated ... I referred to this as a ‘rape,’ but I do not want my words to be interpreted in a literal or criminal sense.”

Two other women accused Trump of sexual assault. One of those women, known only as Jane Doe, filed court papers in which she claimed Trump had violently raped her on multiple occasions. She dropped those charges after reporting that she had been targeted with threats. Jill Harth, a Trump business associate from the 1990s who claimed that Trump grabbed her by the genitals during a sexual assault at his Mar-A-Lago estate, gave a post-election interview to the Guardian where she described Trump’s win as “the biggest con possible. Now time will tell what happens next. I’m hoping for the best, I really am, but afraid he will leave many of us as roadkill.”

After the leak of the infamous 2005 footage in which Trump bragged about committing criminal sex acts against women, roughly a dozen women came forward with allegations of sexual assault and intimidation. During the campaign, Trump said he would sue all of those women following the election. Like many of the promises made on the trail, he has not followed through with that action.

Trump, Bannon and Puzder are member of a cabinet that is anti-woman to the extreme. As The New York Times reported, nearly all of his appointees are opponents of reproductive justice and many have also voted to oppose legislation that would afford women equal pay. The triumvirate of powerful men who have been accused of using physical and sexual violence against women is in keeping with Trump’s misogynist actions and rhetoric over the last few years, including the 18 months of the campaign. Having those anti-woman players involved in shaping and deciding on policy will likely be disastrous consequences for millions of women — including the 53 percent of white women who decided to vote for an openly misogynist man as their president.