Democrats are going to miss Harry Reid when he's gone 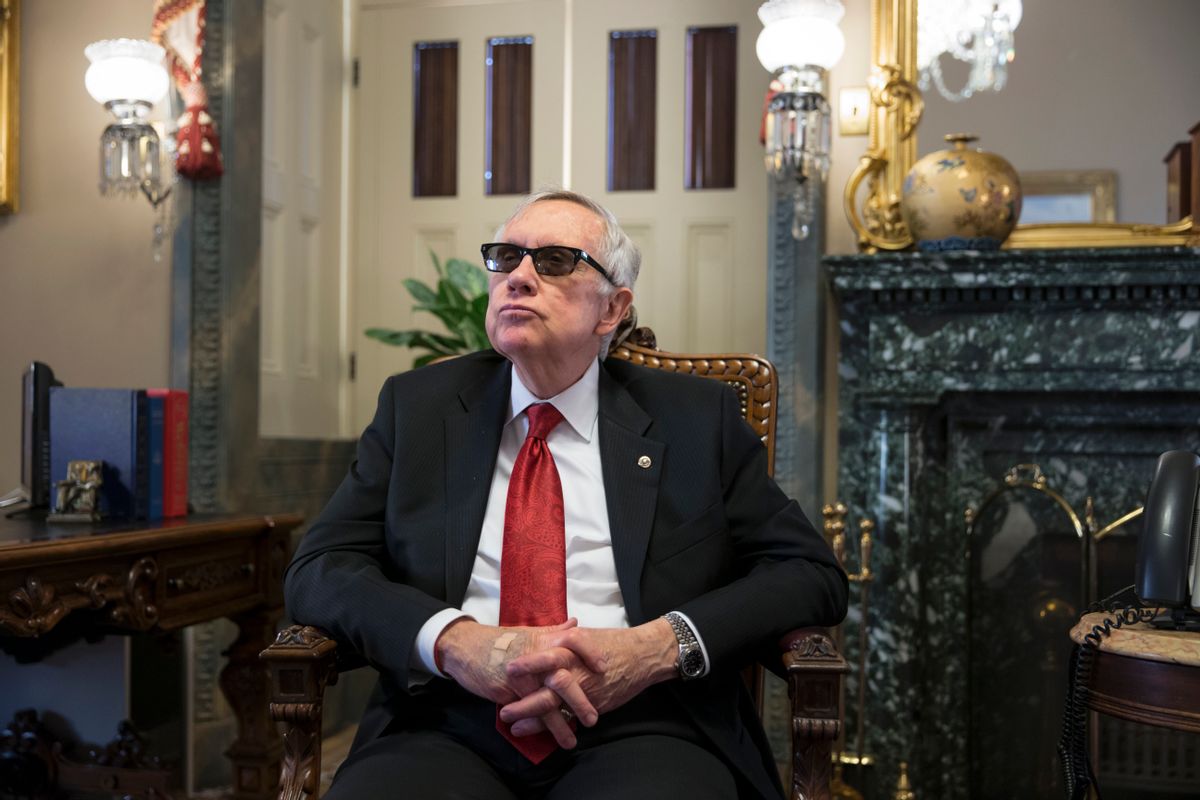 For 10 years, Nevada Sen. Harry Reid — the outgoing Senate minority leader — has been a punching bag for the right, and sometimes even the left. But, as a slew of recent profiles reveals, Reid has built impressive political machines both in his home state and in Congress — and Democrats will really miss him once he’s gone.

Reid's most obvious legacy is the impressive political machine he built in Nevada, the fruits of which could be seen in November. While Democrats up and down the ballot were defeated across the country, the party picked up two House seats from Republicans, and replaced Reid with his handpicked successor, Catherine Cortez Masto. Nevada Democrats also went for Hillary Clinton, and gained control of both houses in the state legislature.

"From the top of the ticket to the bottom, we elected Democrats," Rep. Dina Titus of Nevada told Newsweek in November.

According to political journalist Jon Ralston, "The overwhelming, No. 1 factor" in the Democratic victories was Harry Reid. (He also told Newsweek the state Republican Party "would have to be upgraded to be called a laughingstock").  Reid brought the state party's disparate leaders and factions together, University of Nevada-Reno professor Eric Herzik told Newsweek,and  installed intelligent operators in the state's two main population centers (Clark County and Washoe County).

Reid also hired a talented young strategist named Rebecca Lambe to manage the state's political operations. As a result, Herzik said, "by 2008 they had over 100,000 more registrations than the Republicans," despite initially running roughly even with them, a lead that "continues to this day."

Just as important to Reid's legacy, the Senate Minority Leader pushed the Democratic Party to move Nevada to the beginning of the primary calendar. By pointing to the overwhelmingly white and rural populations of Iowa and New Hampshire, Reid effectively argued that Nevada deserved to be included among the out-of-the-gate primary states in order to better represent both underrepresented minorities as well, as Western states in general. This helped increase voter enthusiasm in a state that had often seen chronically low turnout, which was supplemented by the advanced data collection and voter mobilization techniques utilized by the powerful Culinary Union Local 226 in Las Vegas.

Outside of Nevada, Reid's legacy was strengthening the Democratic Party by making sure its caucus stayed unified behind a progressive agenda. He inspired loyalty by taking the fall for Democratic candidates facing reelection who were facing unpopular votes or opposing bills that progressives believed needed to fail but couldn't openly criticize without facing backlash, intuitively knowing when to fight bare-knuckles battles (such as his famous thwarting of President George W. Bush's Social Security privatization plan in 2005), and managing to keep himself out of the spotlight while wielding tremendous power behind the scenes.

By contrast, Schumer has a reputation for loving the spotlight (hence the famous joke that "the most dangerous place in Washington is between Chuck Schumer and a TV camera") and exercising political caution.

"One of Reid’s greatest skills as his party’s leader in the Senate was keeping his caucus unified," New York Magazine pointed out in a profile Tuesday. "That’s a task that will be especially crucial under Trump: With 10 Democratic senators from states Trump won up for reelection in 2018, the temptation for some of them to peel off and vote with Republicans — to demonstrate they can be reasonable — will be strong."

Unfortunately, Schumer has already given indications that he may not possess Reid's strengths when it comes to fighting and winning hard battles. "Chuck will go to the ramparts on an issue when it’s polling at 60 percent, but as soon as it gets hairy, he’s gone," one senior Democratic Senate aide told New York Magazine. "Chuck wants issues to have no negatives, but it’s the Trump era. He’s looking at polls ­showing 60 percent for the Carrier deal and thinking to himself, Maybe we should support that."

These concerns were reinforced when, after Trump's initial victory, Schumer began attempting to seek common ground with the president-elect. This prompted Reid to send out a public message stating that Trump is "a sexual predator who lost the popular vote and fueled his campaign with bigotry and hate." As he later explained to Jason Zengerle, "What I was trying to say is, ‘Be careful, because this is not all fun and games. The stuff he has said has been hateful and disruptive and crude and not helpful to anybody, and so be careful what you agree with him about.'"

Needless to say, Reid's wisdom — though not widely covered — will be sorely missed when he's gone. And what does he think of the leaders, aside from Schumer, who might take over the party by running for president in 2020?

"It depends on who’s running," Reid reportedly told a staffer, according to Politico. "We’ve got [Elizabeth] Warren; she’ll be 71. Biden will be 78. Bernie [Sanders] will be 79."