Bannon's the man with the power in the White House. But he has a long list of things he hates 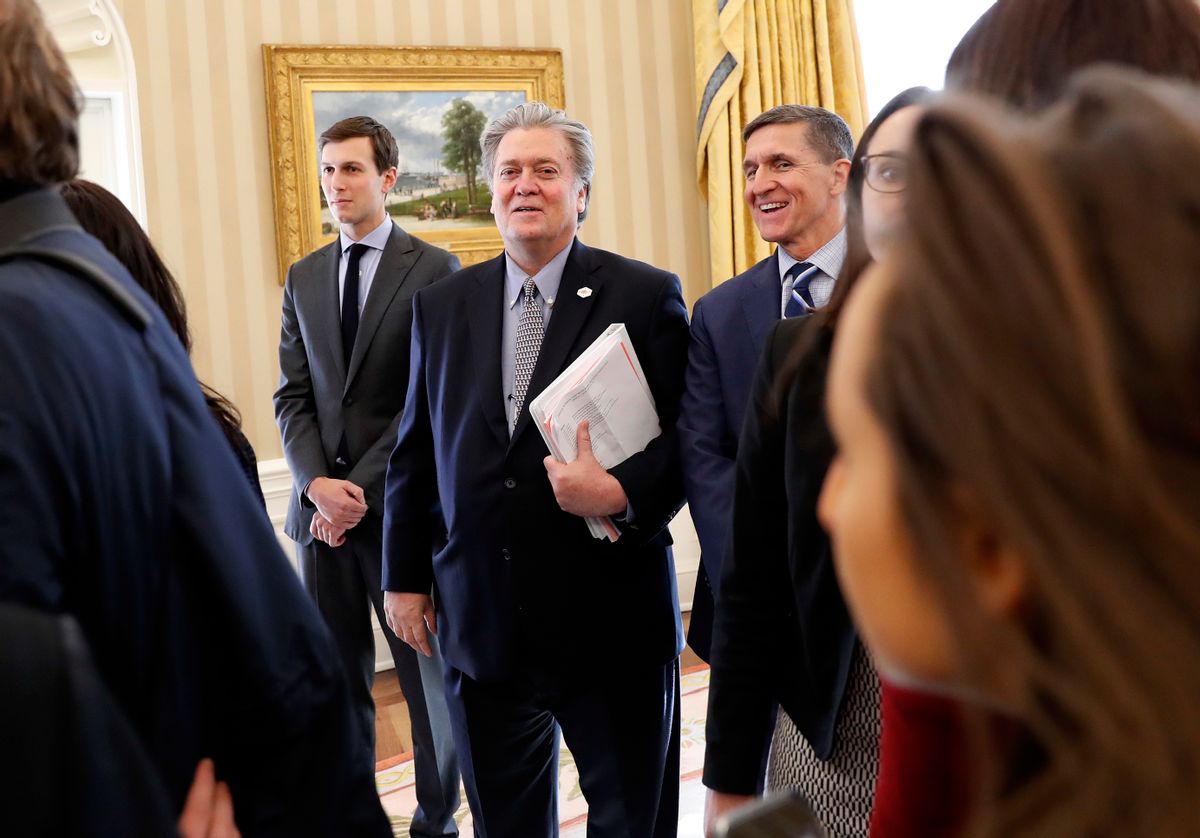 Forget about optics: It was really Steve Bannon who was inaugurated two weeks ago as the 45th president of the United States. The architect of Trump’s campaign, Bannon once called his candidate a “blunt instrument for us,” which is exactly how you might describe a “tool.” When he says Trump is being put to use in service of “us,” Bannon likely refers to a collective led by billionaire GOP megadonors the Mercers, who installed him at the head of the campaign.

“I don’t know whether [Trump] really gets it or not,” Bannon told Vanity Fair soon after he took over, in a fully transparent statement about who’s running this political show.

Andrew Breitbart, the late right-wing crusader for whom the notorious website is named, once reportedly referred to Steve Bannon as the "Leni Riefenstahl of the Tea Party movement.” It’s a statement that only qualifies as high praise if you look favorably upon the work of Hitler’s favored propagandist, which Breitbart and Bannon apparently did. As the head of Breitbart, Bannon honed the site’s racist, anti-Semitic, misogynist and Islamophobic voice so it became a hub for neo-Nazis, white supremacists and garden-variety racists, or in Bannon’s words, the "platform for the alt-right.” Imagine Triumph of the Will reconfigured as a full-color website, with better branding, fewer boring speeches and more ad space.

As chief White House strategist, Bannon—who has been accused of sexual harassment, domestic violence, running Breitbart like a “dictator,” and not wanting his kids to attend school with Jews —has developed a reputation for drafting executive orders without counsel from any of the seasoned experts in the federal agencies they actually affect. Along with Stephen Miller, who is Jewish and described as a good buddy from college by white nationalist Richard Spencer, Bannon is crafting rules that seem to intentionally provoke disorder while also pushing anti-Muslim and non-white immigration policies to the ultra-hard right. A longtime fan of UKIP, the whole Le Pen French racism industry, and other extremist movements across Europe, Bannon is finally getting to put in place the policies he used to pretend were Trump's ideas.

Most recently, Trump appointed Bannon to the National Security Council’s principals committee, effectively demoting career military and intelligence people who actually know what they’re doing. That’s bad news for many, many reasons. Bannon has been director of a biodome study of climate change (the phenomenon Breitbart says only cucks believe in). He produced and directed films including 1992’s Indian Runner, featuring noted bleeding heart Sean Penn, as well as documentary odes to the Tea Party, Sarah Palin and the loudest of the bearded racists on “Duck Dynasty.” (Weirdly, he also made a killing on "Seinfeld," because why should the "Cosby Show" be the only sitcom that’s been ruined?) He has never held a job that would offer a reason for him to weigh in on military strategy, and his political role in the White House means he will probably bring a partisan approach to matters of national security. In fact, Bannon and Jared Kushner were reportedly with Trump when he signed off on the disastrous Yemen raid that left a Navy SEAL and several civilian adults and children dead. Actual lives are imperiled by this team's deadly combination of arrogance and ineptitude.

Add to that, according to multiple sources, Bannon is obsessed with war. His ex-writing partner of 20 years says he “tended to focus on military battles; his bible was The Art of War.” An ex-Breitbart staffer reportedly told the Daily Beast that Bannon “always spoke in terms of aggression. It was always on-the-attack, double down...macho stuff. Steve has an obsession with testosterone.” A recent Time magazine profile paints Bannon as “obsessed” with the book The Fourth Turning: What Cycles of History Tell Us About America's Next Rendezvous with Destiny, whose authors posit that American history works in 80 to century-long cycles of utter destruction and enlightened rebirth. Bannon thinks we’re due to start a new cycle, which can only begin after a period of war and social upheaval.

Hard not to think he’s hastening things along. Here are six things Bannon has declared war on.

In a piece for the Daily Beast, Marxist-turned conservative-Ronald Radosh recounts attending a party at Bannon’s D.C. townhouse in 2013, where the two struck up a conversation about politics. Asked by Radosh to expound on his description of himself as a “Leninist,” Bannon claimed his mission was to see America razed and reconfigured by a right-wing, Tea Party-led version of the Bolshevik Revolution.

“Lenin wanted to destroy the state, and that’s my goal too,” Bannon reportedly said. “I want to bring everything crashing down, and destroy all of today’s establishment.”

Radosh claims Bannon went on to describe conservative outlets National Review and the Weekly Standard as “left-wing magazines” that he also wants to destroy. The aim is to create chaos that destroys the old order, giving rise to a new order that fits Bannon’s ultra-right global vision. As Radosh points out, the Trump administration’s contemptuous relationship with the truth is a strategy gleaned from Lenin himself, who said, “The art of any propagandist and agitator consists in his ability to find the best means of influencing any given audience, by presenting a definite truth, in such a way as to make it most convincing, most easy to digest, most graphic, and most strongly impressive.”

USA Today sifted through dozens of hours of audio from Bannon’s radio program and found that many of the discussions centered on Islam, which he labels the "most radical” religion in the world. In one recording, Bannon declares that the West is “fighting a ‘global existential war’ with Islam.” He also hints that there’s “a fifth column in this country in the government, in the media.”

“We’ve been warned. They attacked us. We had our own Pearl Harbor, and we looked the other way….Want to know why guys like Donald Trump and Nigel Farage are on the rise? Because the elites in this country are too gutless, they’re too gutless to face the enemy that’s trying to destroy us.”

On multiple occasions on his Breitbart radio show, Bannon has gone after China, which he has apparently been gunning for going back years. Trump’s obsession with the country finds its source in Bannon, who’s been putting the anti-China words right in Trump’s mouth.

“We’re going to war in the South China Sea in five to 10 years,” Bannon said in a March 2016 interview with the Heritage Foundation’s Lee Edwards. “There’s no doubt about that. They’re taking their sandbars and making basically stationary aircraft carriers and putting missiles on those. They come here to the United States in front of our face – and you understand how important face is – and say it’s an ancient territorial sea. That's a throwdown, is it not?”

A few months earlier, Bannon took aim at China—along with Islam, his favorite target—while suggesting the U.S. and Europe aren't being aggressive enough toward either. “You have an expansionist Islam and you have an expansionist China. Right? They are motivated. They’re arrogant. They’re on the march. And they think the Judeo-Christian west is on the retreat.”

With Bannon running the show, it’s clear this saber-rattling toward China is part of a calculated plan that the right-wing propagandist started hatching long before he became Trump’s puppeteer.

During a conference held at the Vatican in 2014, Bannon seemed to suggest it’s time to start a brand-new version of the Crusades, telling the audience, “We're at the very beginning stages of a very brutal and bloody conflict."

“[W]e are in an outright war against jihadist Islamic fascism. And this war is, I think, metastasizing far quicker than governments can handle it,” Bannon reportedly told the crowd. “[W]e have to face a very unpleasant fact. And that unpleasant fact is that there is a major war brewing, a war that’s already global. It’s going global in scale, and today’s technology, today’s media, today’s access to weapons of mass destruction, it’s going to lead to a global conflict that I believe has to be confronted today. Every day that we refuse to look at this as what it is, and the scale of it, and really the viciousness of it, will be a day where you will rue that we didn’t act.”

Bannon, who turned Breitbart Media into the preferred rag of white nationalists the world over, knows from firsthand experience that people—especially authoritarian conservatives—crave an enemy to hate and fear. In the absence of a real U.S. political adversary, the media fills that role perfectly for Trump’s base. It’s a textbook move of dictators and tyrants to make the press a primary target, sowing doubt and confusion around facts and truth so they can own the narrative for their own manipulative ends.

And it’s working, at least where the intended audience is concerned. Bannon, a former investment banker, Hollywood movie producer, ex-environmentalist and Harvard graduate who made millions from one of the Jewiest shows in history, has somehow convinced gullible hordes that he is fighting against the (generally less well-paid or educated) “elites” who work in media. As one of the most successful media propagandists of this young century, no one knows better than Bannon that the medium is the message, and the message must be aggressively, relentlessly hammered home. In a recent interview with the New York Times, Bannon played his role to the hilt, even issuing quasi-threats.

"The media should be embarrassed and humiliated and keep its mouth shut and just listen for a while," Bannon reported told the outlet. "I want you to quote this. The media here is the opposition party. They don't understand this country. They still do not understand why Donald Trump is the president of the United States."

6. The Middle East (which he uses as a stand-in for "Islam")

In a radio show recording from November 2015, Bannon again returned to his pet project: a war pitting the Christian West against the Muslim Middle East. Claiming that Islamophobes’ worst tendencies have been unfairly “suppressed for 15 years,” Bannon blamed politicians for not going far enough to malign the religion of 1.6 billion people.

“George Bush walked out after 9/11 in front of a mosque, said it’s a religion of peace and go shopping,” Bannon mocks. “We haven’t had an adult conversation. And by the way, some of these conversations may get a little unpleasant. But you know what, we’re in a war. We’re clearly going into, I think, a major shooting war in the Middle East again.”

The episode focused on an incident in Irving, Texas where a group of anti-Muslim gun nuts terrorized mosque worshippers with weapons and signs bearing messages like, “Stop the Islamization of America.” Other highlights of the recording include Bannon comparing Nigel Farage to Winston Churchill; a right-wing guest complaining that cops are too easy on black people with guns, but “you bring a bunch of white men to a mosque carrying arms and everybody gets all upset”; and a caller who states that “Christianity is solely a religion but Judaism and Islam” have a “whole government set up.”