Donald Trump's coming police state: We have a president who wants unlimited power and won't respect the rule of law

He wasn't kidding about being the "law and order" president. What that will mean looks more chilling every day 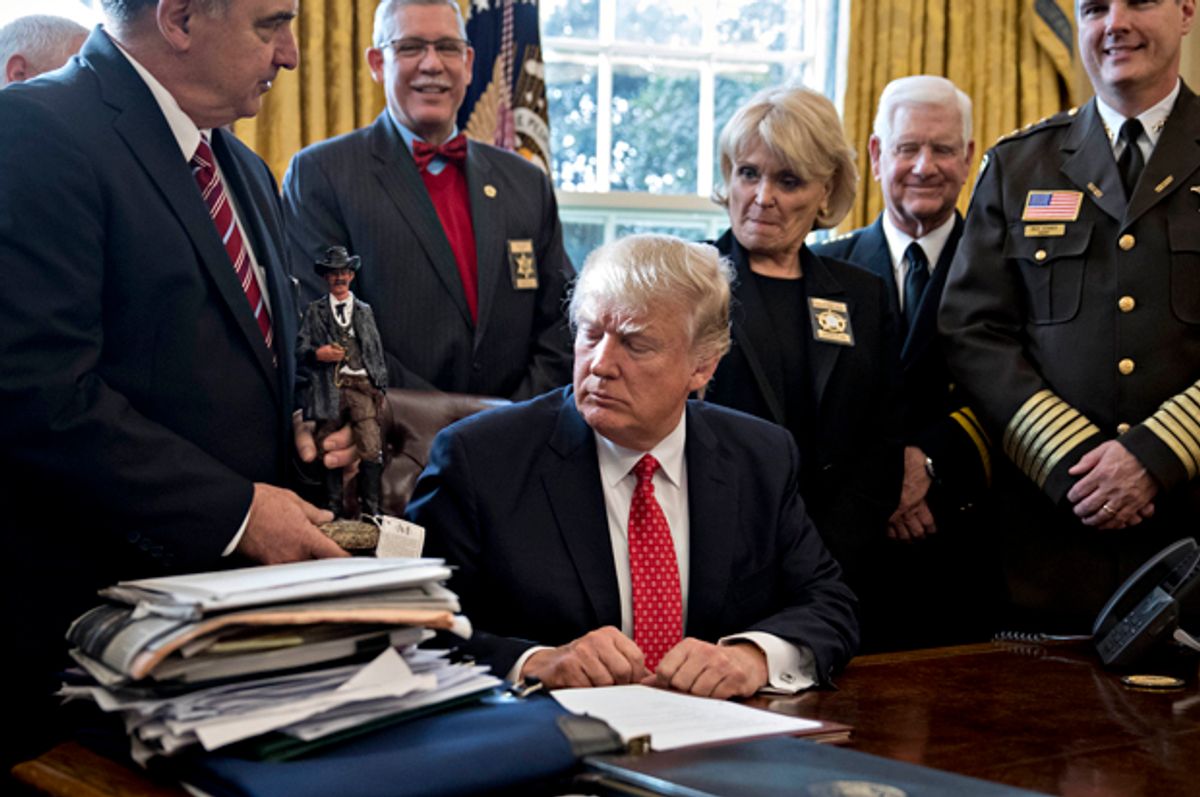 It would appear that some of the folks who were hoping that Donald Trump was actually an isolationist "jobs" president, rather than the authoritarian white nationalist with imperial ambitions that he clearly showed himself to be on the stump, are now being forced to face reality. Everything he has done since his inauguration proves he is dead serious about unleashing the military and the police to enact his agenda, and he wants the other branches of government to understand that if they obstruct him he's going to make sure his rabid followers know whom to blame.

According to Ryan Lizza of The New Yorker, legal scholars of all stripes, even the torture advocate John Yoo, whom I wrote about on Tuesday, are disturbed by Trump's executive actions and what he's saying about them. Pretty much across the board, they anticipate that Trump will blame the courts, the media and the political opposition in the event of an attack. They believe he is anxious to use an attack as an excuse to "take the gloves off" in whatever way he deems necessary.

That could mean everything from registering and deporting Muslims to enhanced surveillance or an attack on a foreign country and the reinstatement of torture and "black site" prisons. (A draft executive order on the black sites has made the rounds already.) All we know at this point is that Trump is looking for an excuse, and odds are there will be one at some point.

But as much as the prospect of such civil-liberties violations are chilling, this isn't the only area where Trump is getting ready to pounce. He has made no secret of the fact that he generally wants law enforcement to become tougher and more repressive. This is one of his bedrock beliefs going back to the late 1980s when he took out a newspaper ad in response to the Central Park Five case, headlined "Bring Back the Death Penalty, Bring Back Our Police."

He ostentatiously dubbed himself "the law and order candidate" during his presidential campaign and actively courted police unions. In his "New Deal for Black America," the second item on his list is for his administration to "invest in training and funding both local and federal law enforcement operations to remove the gang members, drug dealers, and criminal cartels from our neighborhoods."

Trump has been vague about his policy on marijuana, generally saying that legalization should be left to the states. But he has made many comments about the need to stop drug trafficking at the border, including his announcement of his presidential bid when he famously declared that undocumented workers were flooding across, "bringing drugs" and "bringing crime." He has made it clear that he is determined to jump-start the drug war, and the man he has chosen to lead up the Department of Justice, Sen. Jeff Sessions, is a hard-core drug warrior.

Sessions is famous for quipping that he thought the Ku Klux Klan was all right until he found out that some of its members smoked pot, an odious comment on many levels. But his record goes far beyond that. Sessions is hostile to all bipartisan congressional efforts to roll back federal authority on marijuana laws, such as the Compassionate Access, Research Expansion and Respect States Act. Known as the CARERS Act, it would fix federal laws that prevent legal pot businesses from using the banking system and paying taxes.

He opposed the Rohrabacher-Farr amendment, which protected states with medical marijuana laws from federal interference, and the McClintock-Polis amendment, which would have done the same for states that have legalized pot for recreational use. The principal sponsors of those bills, Reps. Dana Rohrabacher and Tom McClintock, are both conservative Republicans.

Sessions is also an enemy of sentencing reform, one of the few bright bipartisan efforts of recent years. Most observers believe the reform effort is probably dead under a Trump administration. Nobody wants to put people in jail and throw away the key more than Donald Trump. It's a terrible setback because the cost in dollars and human misery of our current sentencing practices is a national disgrace.

Another criminal justice issue that has drawn bipartisan concern is asset forfeiture, a corrupt practice whereby police agencies seize the property of suspected criminals and keep the booty. You can imagine that the incentives are very skewed. There has been a concerted effort in recent years to address the unfairness of stealing someone's property without any due process. Even those who are not convicted of any crime are almost always out of luck when the whole thing is over. It's a bonanza for law enforcement agencies but makes a mockery of our commitment to the idea of a presumption of innocence.

I cannot say I'm surprised that Trump is a big fan of that practice as well. After all, he believes "to the victor belongs the spoils" and is perhaps the only Republican in the country to defend "eminent domain," which is the right of the government to force people to sell their property at a fair market value so it can build necessary public infrastructure. Opposition to eminent domain has been a central element of the right-wing agenda for decades, but rank-and-file Republicans proved it was more of a talking point than an article of faith when they didn't bat an eye at Trump's defense of a practice that he once used to line his own pockets.

Yesterday the president invited a group of sheriffs who endorsed him to the White House and allowed cameras in the room as they chewed the fat about border security, "law and order" and other issues they felt had been ignored by the previous administration. One Texas sheriff brought up asset forfeiture, explaining  that a state senator had produced a bill that would require a conviction before law enforcement could seize a person's property.

Trump was aghast that anyone would suggest such a thing, replying, "Can you believe that? Who is the state senator? Do you want to give his name? We'll destroy his career."

All the sheriffs laughed heartily, but other people in the room visibly winced. We know that Trump likes to threaten people and if his early executive orders are any example, he's serious about carrying through on his promises.

If that doesn't work, he has the whole Department of Justice and half the police in the country at his disposal. People may think he's just joking, but Trump isn't really a funny guy. His threats are real, and people should be careful about what they say to him.

That sheriff wisely refused to name names. Whether to do that is a question many people will have to ask themselves in the coming days. When it comes to bringing the strong arm of the law down hard, Donald Trump isn't kidding.