Trump's White House is causing chaos in the intelligence community

From Flynn's mysterious chat with Russia to the president's incessant tweeting, chaos abounds 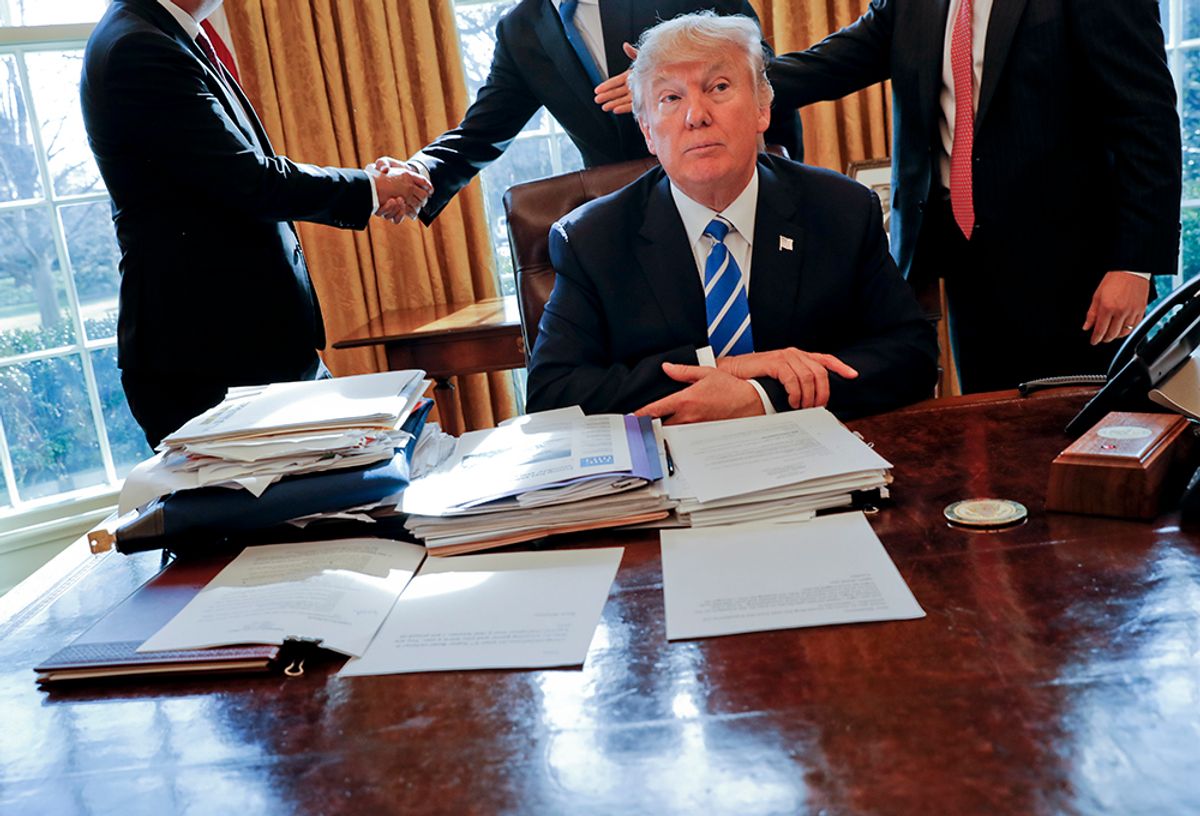 New reports indicate that the process for making foreign policy under President Donald Trump has been a horrible mess.

Part of the problem seems to be the overt partisanship displayed by many of the most influential officials in Trumpworld. Trump appointees carry coffee mugs declaring "Make America Great Again" to meetings with foreign officials and discuss reviewing their social media accounts to make sure they don't contain messages which could be construed as critical of the president, reported The New York Times. Deputy national security adviser K. T. McFarland even told an all-hands meeting that they needed to "make America great again," making many of the ostensibly non-partisan civil servants in attendance uncomfortable.

"Not only is this a new administration, but it is a different party, and Donald Trump was elected by people who wanted the status quo thrown out," McFarland told The Times. "I think it would be a mistake if we didn’t have consternation about the changes — most of the cabinet haven’t even been in government before."

It isn't just a question of which party is in charge. The Times also reported that members of the national security council have developed a habit of reading the president's Twitter posts so they can adjust foreign policy to its dictates. They have even discussed suggesting tweets to the president in advance so they can increase their influence on his foreign policy instead of scrambling to catch up.

Nor does the amateurishness stop there. President Trump apparently insists that papers not be any longer than a single page and that they contain illustrations like maps. Moreover, because the administrative chaos has interfered with a regular flow of paperwork, important officials like CIA Director Mike Pompeo are often left out of the loop on important policy questions.

Perhaps the most pressing news, though, is the fate of national security adviser Michael T. Flynn. The former lieutenant general is increasingly in the hot seat for allegedly lying to Vice President Mike Pence and other administration officials about whether he discussed President Barack Obama's sanctions during a Dec. 29 meeting with a Russian ambassador. Although Flynn has apologized to White House colleagues, chief strategist Steve Bannon is still sending instructions that the president should "be ready" to fire him, according to a report by The Wall Street Journal. At the same time, President Trump is reluctant to outright fire Flynn due to fears that it would create the perception that his administration is disorganized. Trump is also concerned that, because Flynn tends to agree with his foreign policy views more than many other top administration officials, he would lose an important voice by severing ties with him.

Nevertheless, if it is proved that Flynn convinced Russia to avoid retaliating against President Obama's sanctions before taking office, he could potentially find himself in violation of a law that prohibits private citizens from trying to circumvent American policy with foreign governments.

The pervasive sense that President Trump has been compromised by Russia is already hurting the president's relationship with his own intelligence community.

"Our Intelligence Community is so worried by the unprecedented problems of the Trump administration — not only do senior officials possess troubling ties to the Kremlin, there are nagging questions about basic competence regarding Team Trump — that it is beginning to withhold intelligence from a White House which our spies do not trust," writes The New York Observer.