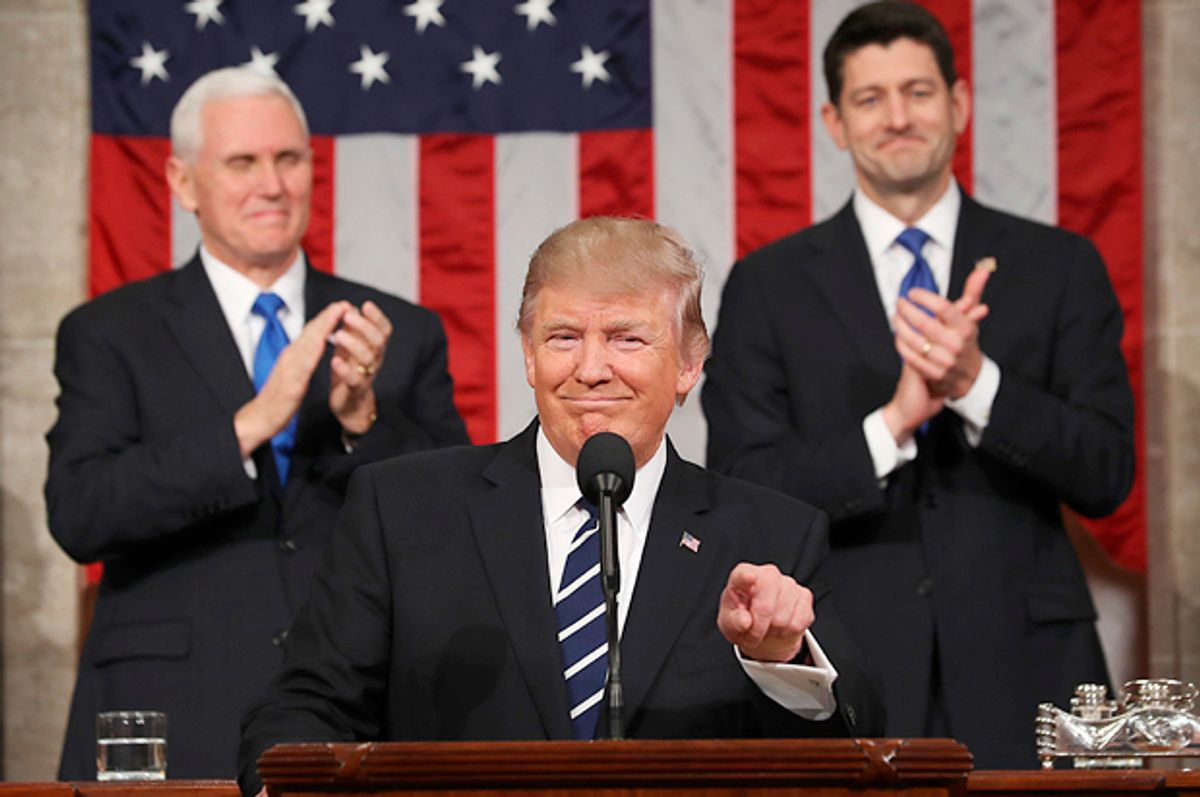 Mike Pence and Paul Ryan applaud as Donald Trump arrives to deliver his first address to a joint session of Congress from the floor of the House of Representatives, February 28, 2017. (Reuters/Jim Lo Scalzo)
--

Because so much of political punditry revolves around optics, let us dispense with those first.

On Tuesday night President Donald Trump stood in front of a joint session of Congress, read a speech off a teleprompter with little trouble and walked back out of the room without tripping over his own exceptionally long necktie. He cleared the bar only because it is set so low for him that one would need a team of archaeologists to dig it up.

The speech itself was the usual mixture of poison and BS to which we have grown sadly accustomed. By now the only people who must watch a Trump speech with even a vague glimmer of a hope that he will start acting “presidential” — that he will finally achieve that long-hoped-for “pivot” — must be the cable pundits and columnists who have airtime and column inches to fill. The rest of us have long since moved on if we know what’s good for us.

Because inside that overripe cantaloupe of a head, Donald Trump’s world remains a frightening place, detached from reality with the sheerness and severity of a sawed-off tree limb. The almost grudging nods to unity that he tossed to his Democratic opponents could not cover the usual dystopian nightmare vision of America that he painted. In Trump’s view, the nation is infested with “criminal cartels” and drowning in waves of illegal immigrants who are gunning down Americans with impunity. It is threatened by “a network of lawless savages” known as ISIS. The Affordable Care Act is “imploding,” a total disaster. The streets are awash in drugs — and so on.

As is the case with almost every Trump speech, almost every single word was a lie, including the articles. America's population of undocumented immigrants was no longer increasing, and quite likely declining, when Trump took office. Immigrants commit crimes at lower rates than native-born citizens. Your chances of being killed by an Islamic terrorist within America’s borders are lower than your odds of being killed by a chunk of falling space debris. Addiction to drugs is an ongoing concern, as it always has been in American life. But to hear Trump tell it, you’d think no one in Washington could stroll Pennsylvania Avenue between the Capitol and the White House without tripping over skinny heroin addicts lolling on dirty mattresses in between fixes.

What was most striking, however, was the distance between some of the rhetoric of the speech and the words and actions of Trump himself just during the day on Tuesday. It was if the speech had been written by a speechwriter who spent the last four weeks locked in a sensory-deprivation tank. At one point, Trump mentioned a desire to work “to promote clean air and clean water.” Yet just hours before, he had overturned an Obama-era rule aimed preserving safe drinking water, in an apparent prelude to “eliminating” the Clean Water Act of 1972.

Or take his condemnation of the recent wave of vandalism of Jewish cemeteries and bomb threats called in to Jewish community centers across the country. In addition to having waited several days to condemn the acts, he had just that afternoon seemed to imply to a meeting of state attorneys general that the threats might have been phoned in by his political opponents to make his supporters look bad.

Most appalling was the moment when Trump recognized Carryn Owens, who was seated in the audience with his daughter Ivanka. Owens’ husband Ryan was the Navy SEAL killed in a botched raid on a terrorist hideout in Yemen four weeks ago. Trump had authorized the raid despite doubts about the intelligence used in its planning and the viability of the plan itself. Then instead of taking responsibility, earlier on Tuesday he had tried to deflect blame for the raid's execution, and for Ryan Owens’ death, onto the military and the Obama administration, which had developed the original plan.

It was a low moment, even for a man whose life is a 70-year-long string of them.

But that was Trump on Tuesday night in his first joint speech to Congress, as it has been since he first announced his run for the presidency: flat-out lying about the nation’s problems, locked into the hard-right dogma that persists in his administration despite its being knocked down by reality time and time again. With a smirk on his face and his chin upturned, he resembled no one so much as Toad of the Frog and Toad children’s books, gaslighting this nation of suckers one more time.