The wheels that set her free: The humble bicycle continues to be a key to women's empowerment

From an audacious 1895 global trek to girls in developing countries biking to school, 2 wheels change everything 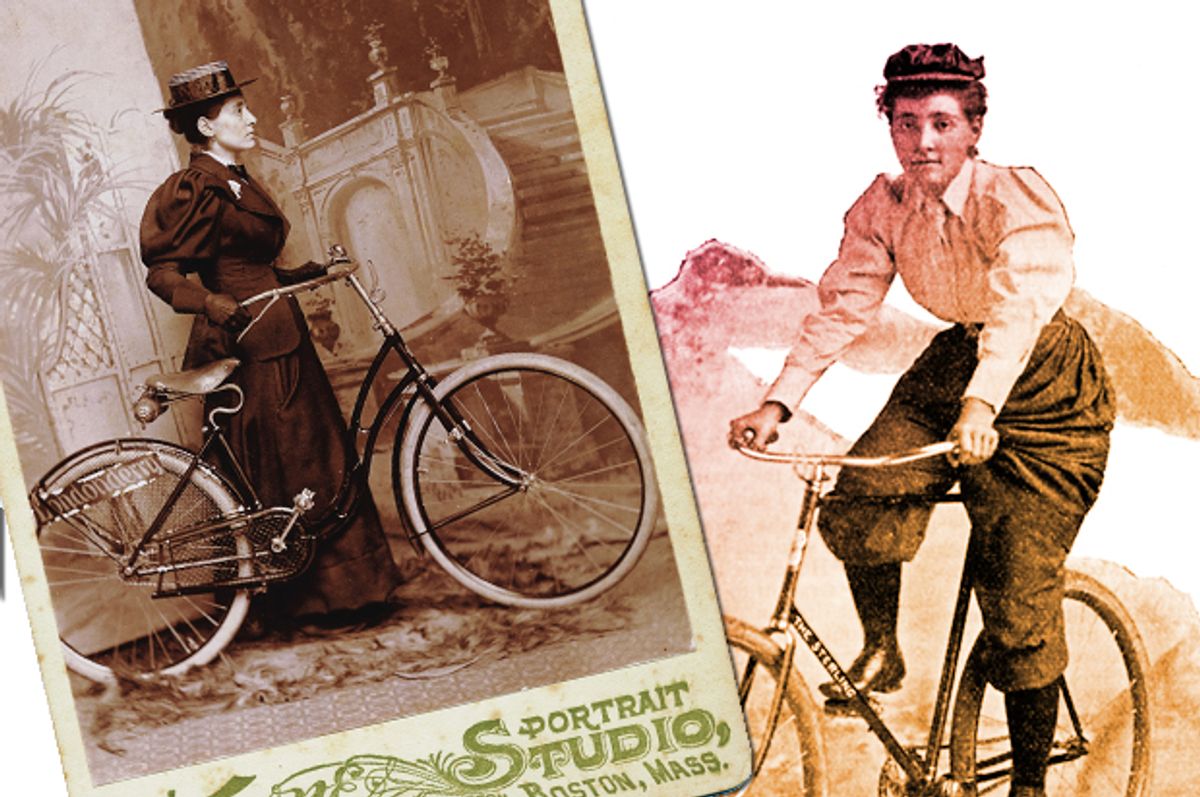 In September of 1895, a young Jewish mother from Boston rolled into Chicago astride a Sterling bicycle and declared victory. She had set out 15 months earlier, leaving her three young children and husband behind, in an attempt to become the first woman to circumnavigate the globe by bicycle. Though her purchase on that title would prove dubious — in addition to riding approximately 7,000 miles by bicycle she made liberal use of trains and steamships — she had, nevertheless, succeeded spectacularly in another of her goals: to become famous as an international symbol of women’s emancipation, and it was the bicycle that had set her free.

Her name was Annie Cohen Kopchovsky, but she rode under the name Annie Londonderry, a nod to her first corporate sponsor (there would later be many others), the Londonderry Lithia Spring Water Company of New Hampshire, which paid her to assume the name and carry an advertising placard on her bike. She traveled light, with only a change of clothes and a pearl-handled revolver.

Ostensibly, Annie was riding to settle a bet between two wealthy Boston gentlemen that a woman could not do what only a man had done before – circle the world on two wheels – and to do it within 15 months. An enormous prize awaited if she succeeded: $10,000, a considerable fortune in 1895. But, in all likelihood the wager was a fiction of her own creation, a way to add drama to her enterprise by turning it into a 19th-century battle of the sexes, thus assuring the keen attention of the press and the public at a time when women’s rights were hotly contested. Regardless of whether the wager was fact or fiction her journey was the audacious and radical odyssey of one woman seeking self-fulfillment, a daring race around the world during which she shattered every Victorian notion of femininity and of a woman’s place in society. The bicycle was, quite literally, her means of escape from the straitjacket of expectations for female behavior that had long kept women subservient to men.

For women such as Annie the bicycle was physically liberating. The sensation of gliding down a California hillside, the wind in her face, or advancing though the French countryside under her own power, was an experience being shared by millions of women in the United States and Europe as the bicycle’s popularity reached a fever pitch in the 1890s. When Annie left Boston, one reporter wrote that she had “sailed away like a kite down Beacon Street.” But that sense of physical liberation, akin to flying, stirred something even more profound. Now free to travel greater distances under their own power, the world opened up to women, literally and figuratively, as never before. It would help mobilize and radicalize many to insist on the right to vote and to advocate for social equality, an upheaval of the traditional social order that many, mostly men, deemed a threat to civilization itself.

She began her journey on a 50-pound women’s Columbia bicycle, dressed in long skirts, a blouse and a trim jacket. She finished more than a year later on the 21-pound men’s Sterling bicycle she wheeled into Chicago, dressed in a man’s riding outfit. The evolution of her riding attire was, in part, an adaptation to the practical demands of cycling, but it was also one of the ways Annie challenged convention. She was brash, talkative and, it seemed, especially to the French, rather masculine, having ridden herself into shape by the time she reached France.

Annie was propelled not just by the muscles in her legs, however, but by the radical idea that she was, as she later wrote, “a ‘new woman’ – if that term means I believe that I can do anything that any man can do.” Several months after Annie lay down her bike, no less an authority than Susan B. Anthony declared that bicycling “has done more to emancipate women than anything else in the world.”

Indeed, mastery of the bicycle as a metaphor for women’s mastery over their own lives was the message of Frances Willard’s 1895 book "A Wheel Within a Wheel: How I Learned to Ride the Bicycle." Willard was one of the most famous women of her day. In addition to a suffragist, she was the founder of the Women’s Christian Temperance Union, which had a mass following of independent-minded, often politically active, women. At age 53, Willard resolved to learn to ride a bicycle because, as she wrote, she “wanted to help women to a wider world … from natural love of adventure – a love long hampered and impeded…[and] from a love of acquiring this new implement of power and literally putting it underfoot.” (Emphasis added.).

My interest in Annie Londonderry’s story is more than historical; it’s familial. She was my great grandaunt and over the years that I worked to resurrect her story from the dustbin of history I came to appreciate just how revolutionary (pun intended) and transformative this relatively simple technology — the self-propelled, two-wheeled machine we call the bicycle — was and continues to be. The bicycle has proven that it not only has the power to change individual lives, but to transform society itself.

For example, thanks to World Bicycle Relief (WBR), today, across Africa, tens of thousands of women and girls are learning that they, too, can balance on two wheels and pedal their way to independence. In the stories of some of the women and girls who have benefitted from these bicycles I see and hear the echoes of my great grandaunt Annie’s journey reverberating across the decades and the continents.

For these girls, hours spent in exhausting daily walks to and from schools miles away has become a short and exhilarating bike ride. The result is improved attendance and academic performance, for a short ride is far less tiring than a two-hour walk and frees up more time for study, chores and leisure. Health care workers who travel from community to community, many of them women, can now see more patients more frequently, increasing the quality of care and health outcomes. Women with small businesses, such as dairies, can now deliver more milk faster than ever before, increasing productivity and allowing them to expand their businesses.

Now, as in Annie’s day, the humble bicycle punches well above its weight as an instrument of social change, women’s empowerment and economic development, and its potential to help solve some of our most pressing social challenges – from climate change to access to health care to creating sustainable economies — remains largely untapped.

Change can take decades, generations and even centuries. Some battles must be fought over and over again in different times and different places. Some of the male prejudice about women on wheels persists in many places even today.

Ten years ago I visited a bicycle riding school in Somerville, Massachusetts, that teaches adults to ride. Most of us take bike riding for granted, something learned in childhood and never forgotten. Two of the woman in the class hailed from the Caribbean: Janaki Thomas from Dominica and Dee Smith from St. Lucia.

In Dominica, Janaki told me, bike riding was frowned upon for girls, which is why she never learned. It was assumed girls who rode bikes were loose. “It wasn’t considered ladylike,” she added.

While researching Annie’s story I read countless newspaper accounts in which cycling for women was deemed scandalous, medically dangerous (perhaps leading to infertility) and, because of a woman’s contact with the saddle and the vibrations of the bike, sexually stimulating and therefore utterly unacceptable. In Dominica more than a century later the notion that cycling simply isn’t appropriate for women still lives, as it no doubt does in many African communities where girls are not valued as boys are.

Dee Smith, who encountered sentiments similar to those Janaki described, told me she always imagined bicycle riding would feel like dancing, but a few weeks later, once she had mastered the art, she confessed she had been mistaken. “It doesn’t feel like dancing,” she told me with a smile. “It feels the way I feel when I dream I am flying.” Now that ‘s empowerment!

A few weeks ago, watching a series of videos produced for WBR, I was struck by how strongly the images and words of 21st-century women and girls in distant Africa mirrored images Annie created and words she wrote well over a century ago. One of the films features a 15-year-old girl, Angela, who received a bike from WBR that she uses to commute to school. Riding over rudimentary roads and through woods and across streams she was traveling under conditions similar to those Annie encountered in the 1890s. And then there were the words.

“Now that she has a bicycle nobody will stop her,” says Angela’s grandmother. “Nobody. When I see Angela doing good like this I feel it!” Then, uttering words nearly identical to those Annie wrote in 1895, she adds, “what a man can do, a woman can do.” Amen to that.

Peter Zheutlin is a freelance journalist and author whose work has appeared regularly in The Boston Globe. He has also written for The Los Angeles Times, The San Francisco Chronicle, The Bulletin of the Atomic Scientists, AARP Magazine, Bicycling and numerous other publications in the United States and abroad. Peter is an avid cyclist the author of seven books including "Around the World on Two Wheels: Annie Londonderry’s Extraordinary Ride" (Citadel Press/Kensington, 2007).