Vice founder Gavin McInnes struggles to walk a fine line between edgy, hip right-winger and something much uglier 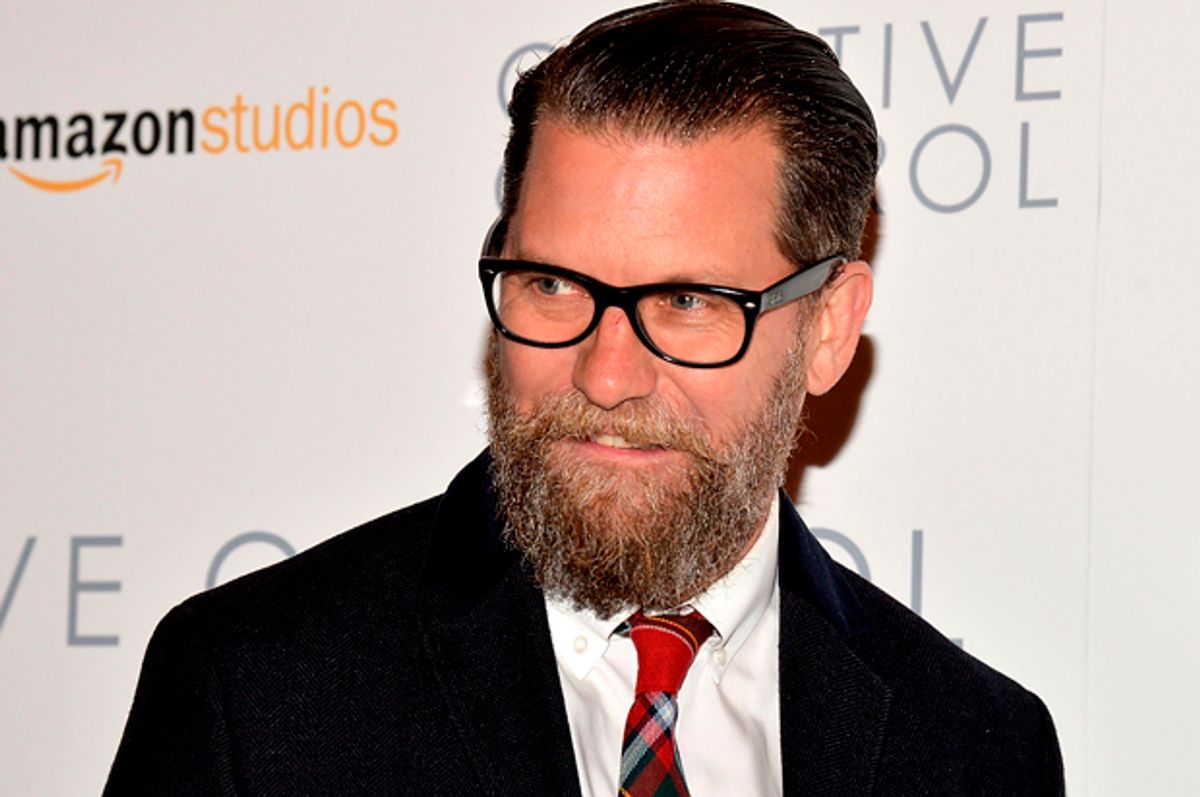 For those who admire the current iteration of Vice, a hip-but-professional news and culture website that invests in things like investigative journalism and a feminist vertical, it may come as something of a surprise to find out that one of the site's founders, Gavin McInnes, has a post-Vice career (after leaving the company in 2008) as a right-wing provocateur.

McInnes' media personality involves a stance of "political incorrectness," and he mostly spends his time titillating his audience by using racial slurs and pushing a pseudo-edgy misogyny, a shtick that got him a spot as a Fox News contributor for several years as well as gigs hosting various video series and podcasts. But he has managed to keep one foot in more mainstream conservatism by avoiding the the overtly Nazi-style tropes of overt racism and anti-Semitism that have come to define the alt-right.

Until recently, that is. On March 11 a video was posted of McInnes coughing up a really elaborate apology for Holocaust denial and anti-Semitism. The social-media kerfuffle over this was enough to cause McInnes to do something he rarely does: backtrack, sort of.

Here's some background: McInnes is part of The Rebel Media, a right-wing website run by Ezra Levant, who is more or less Canada's answer to Glenn Beck. Recently, Levant and a handful of his hosts, including McInnes, went to Israel to generate a series of video reports using the ongoing conflicts in the Middle East to promote The Rebel's Islamophobic views and its support for a more oppressive Israeli security state.

Avoiding all appearance of pandering to anti-Semitism would seem to be important in forging an alliance with the Israeli right. Apparently this expectation was more than McInnes could handle, because he put up a lengthy video rant on a non-Rebel feed where he minimized and made excuses for Holocaust denial and Nazism.

"I’m becoming anti-Semitic," McInnes rambles in the video, which was excerpted by a YouTube user named Jason.

McInnes cites a tour guide who denounced Holocaust denialists during McInnes' trip to the Holocaust History Museum at Yad Vashem in Jerusalem.

"And I felt like, I felt myself defending the super far-right Nazis, just because I was sick of so much brainwashing," McInnes continues. "I felt like going, ‘Well, they never said it didn’t happen. They’re saying it was much less than 6 million and that they were starved to death and weren’t gassed.’”

After clarifying that he doesn't agree with these views, McInnes continues by saying, “But there’s been a lot of genocides." He goes on to describe Soviet dictator Joseph Stalin's policies in the Ukraine, which led to widespread famine, this way: “That was by Jews. That was by Marxists, left-wing commies, socialist Jews.”

It gets worse, if that can be believed, with McInnes saying the Treaty of Versailles was "disproportionately influenced by Jewish intellectuals" and suggesting that was why Germans who supported the Nazi regime were so eager to blame the Jews for their post-World War I economic deprivations.

After this video began to circulate, overtly white supremacist circles online embraced McInnes as one of their own.

McInnes appears to have panicked in response.

McInnes also swiftly followed up, on March 12, with a Rebel-branded video in which he says, “No offense, Nazis, I don’t want to hurt your feelings, but I don’t like you. I like Jews." He also went on to deny saying that he blames the Ukrainian genocide or the rise of the Nazis on Jews, though, as the quotes above indicate, it sounds like that's exactly what he was saying.

The bizarre is-he-or-isn't-he behavior by McInnes is a predictable result of the rapidly shifting market pressures in right-wing media in the age of Trump, as Angelo Carusone, president of Media Matters saw it. People like McInnes have built their brand on provocation and "political incorrectness," but they also "know there's some hard lines in business still," Carusone said. "And it’s really hard to scale, in the way [McInnes] knows is possible, if you have that baggage associated with you."

It's apparently one thing to denounce women's suffrage or suggest that every case of domestic abuse he knows about “was the result of some cunt trying to ruin [a man’s] life,” as McInnes has done. But sticking a toe into the deep waters of Holocaust denial is a bit too much for someone who wants to occupy the incendiary-but-still-mainstream-conservative space that McInnes has lodged himself into.

The problem for McInnes and similar right-wing firebrands, however, is that their brand of pseudo-edgy provocation is looking a bit quaint compared to the openly white supremacist, Pepe the Frog-loving alt-right crowd that has emerged online. McInnes has "been immersed in the alt-right milieu for a while, though he's often been dismissed by the Nazi-er types as 'alt lite,'" David Futrelle, who runs a site dedicated to tracking hate speech online, explained over email.

Keeping up that image of the reactionary as rebel is tougher to pull off in an era when people are openly throwing the "Sieg Heil" salute and the president himself has bragged that he grabs unwilling women "by the pussy." Capturing that alt-right audience without running off slightly less authoritarian-friendly viewers or readers is a delicate art.

“This seems to be the model now of the alt-right-y thing as a whole, where they try to have their cake and eat it, too," Carusone argued. "They get to say and do all this crazy shit." But when "the white nationalist community embraces it," then they "denounce that community or say they don’t want to be associated with it.”

McInnes didn't return my requests for comment, but his behavior this week suggests he is trying to find his balance on that delicate tightrope where he can appeal to the burgeoning alt-right crowd without being forever marginalized as a wannabe Nazi. While McInnes claims in his Rebel video that he doesn't like Nazis, he also says, "I don’t like dwelling on genocide" and accuses Israelis of "constantly apologizing" for the treatment of Palestinians and for supposedly being too weak to embrace Donald Trump. Shortly after my phone interview with Carusone, almost as if to illustrate it, McInnes posted yet another video on the Rebel feed, this March 14 one called "10 Things I Hate About Israel."

The new video is cleverly constructed, if the goal is simultaneously to appeal to anti-Semites while creating enough plausible deniability to fend off the anger of anti-anti-Semites. McInnes starts off with innocuous comedy-style complaints about Israel and Israelis — he didn't like the food and the waiters were rude — creating the impression that this is all just politically incorrect fun and not real bigotry.

But at a point after most ordinary and sensible people will click off the video, McInnes starts complaining that Israeli Jews have “whiny paranoid fears of Nazis," which he believes is the reason they won't support Trump. The tightrope act is also evident in the title of the video, which was originally called "10 Things I Hate About Jews." McInnes' tweet, which he briefly pinned, was even more aggressive in its rhetoric.

But the video wasn't up long before the title was changed and the tweet was unpinned from McInnes' feed.

This entire episode points to a larger problem, Carusone argued, which is that people like McInnes, in pursuit of that "edgy" vibe, have made themselves into gateway drugs for white nationalism.

“Gavin’s been mostly isolated to the men’s rights base," Carusone said, noting that McInnes has started the Proud Boys Network, which, in a show of deep unawareness, organizes "chapters and meetings to essentially provide safe space" for men who feel they can't say sexist things in other spaces without getting pushback.

Lately, Carusone argued, "this men’s rights community is one of the biggest pipelines to white nationalism." Neo-Nazis see these groups of "disaffected, predominantly white men" and find an opportunity to recruit.

This anti-feminist-to-white-nationalist road has been established by more underground figures than McInnes, mostly on "pickup artist" and "men's rights" websites that have, in recent months, increased their amount of content devoted to telling white men that immigrants, black men and Jews are exploiting feminism in order to dismantle white American culture. At the same time, more overtly white supremacist sites have started to publish more anti-feminist content, trying to lure in that same audience.

More openly white supremacist and alt-right folks have their own interpretation of McInnes's behavior. Andrew Anglin of the Daily Stormer, an unapologetically neo-Nazi website, offers his take on McInnes "cucking like a sonovabitch":

There are two possibilities which explain what’s taken place here:
1.  Gavin McInnes was genuinely pissed off at Jews, and was drinking as he always is when he recorded the show, and just said what was on his mind before later regretting it and being yelled at by his Jewish boss, or
2. Gavin McInnes said this purposefully (maybe even with the blessing of his Jewish boss) to try and get Jew-wise people to stop attacking him, knowing when he said that he would later retract it, but hoping anti-Semites would remember it and be like “yeah, Gavin is on our side, he just keeps it quiet.”

Maintaining this stance of being a provocative, politically incorrect right-winger while still shunning associations with outright Nazis used to be easy. But this is 2017, and things have clearly changed.