Jeff Sessions to police: Just be you! Civil rights are overrated anyway 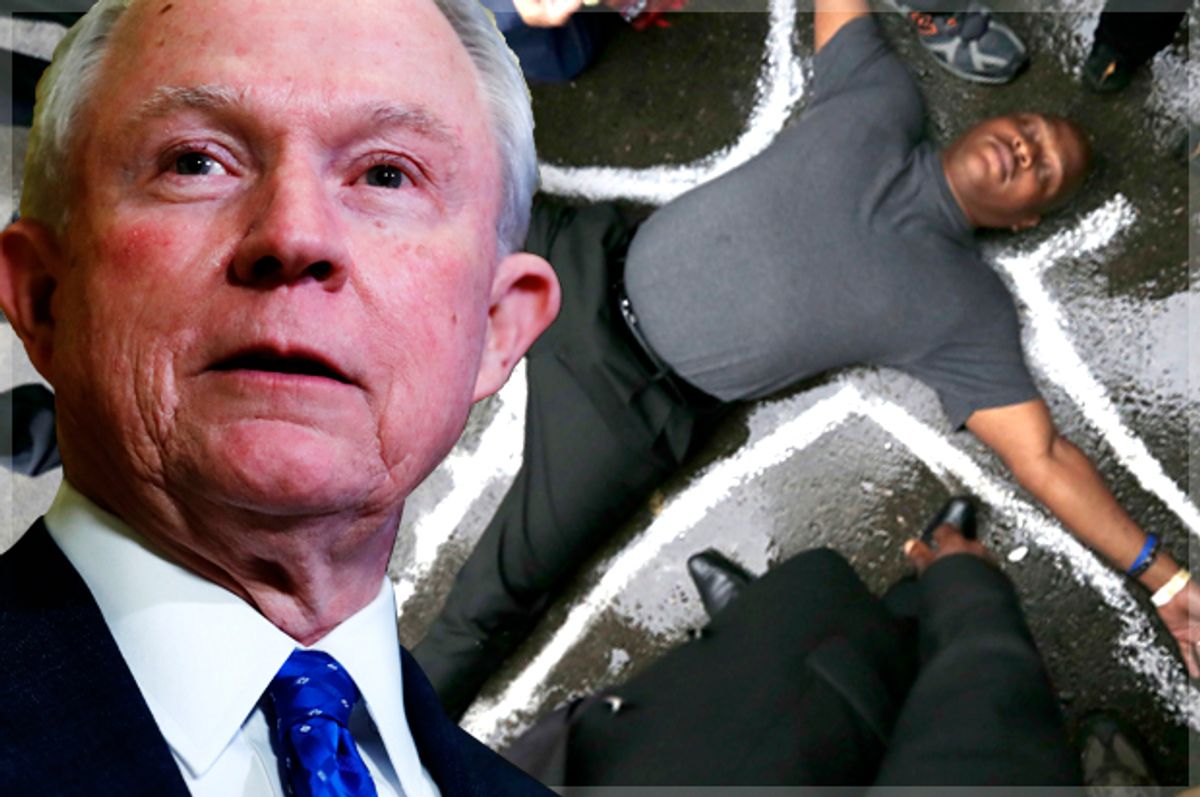 It's understandable that the chaos of the Trump administration and the dysfunctional House Republican caucus takes up all the political oxygen these days. But it's important to not overlook the areas of the executive branch that are actually carrying out Donald Trump's agenda.

Some departments, like the Environmental Protection Agency and the Department of Education, are still getting up to speed, but signs are that they're going to do some serious damage. Others, like Dr. Ben Carson's Department of Housing and Urban Development, are missing in action altogether so perhaps they'll just die of benign neglect. The State Department still seems to be a mess, with Secretary of State Rex Tillerson so out of it that he's now releasing press releases that might as well say "Do Not Disturb." (After North Korea launched another intermediate-range missile Tillerson, simply said, "The U.S. has spoken enough about North Korea. We have no further comment.")

On the other hand, there are some departments that are up and running with all cylinders firing. Department of Homeland Security staffers are working feverishly to seal the border and harass immigrants. They're even starting to go after tourists, requiring them to hand over electronic devices and social-media passwords before being granted the privilege of coming here to spend their money. If all goes well, DHS should be able to completely destroy the travel industry within a year or so and ensure that foreign students and workers will go anywhere but the U.S. in the future.

The Pentagon is also going great guns (so to speak), getting its war on with renewed vigor. Defense officials insist that all the recent civilian carnage in Iraq, Yemen and elsewhere is not a result of new official rules of engagement. But people who study such things recognize that the attitude toward such behavior always flows from the top, and the president has made it clear that he wants to take the gloves off. He couldn't even take a moment, during two public appearances on Tuesday, to condemn the gas attack that killed dozens of Syrian civilians, instead releasing a boorish statement blaming the administration of former President Barack Obama. But then, Trump has long believed that the use of such weapons was something "strong" leaders sometimes have to do.

Saddam Hussein throws a little gas, everyone goes crazy, "Oh, he's using gas!" They go back, forth, it's the same. And they were stabilized.

The U.S. hasn't resorted to chemical attacks on children but you can imagine that the battlefield commanders assume they have a wide berth when their commander in chief is on record endorsing war crimes like torture, killing of families and mass summary execution.

And as I predicted would happen when Jeff Sessions was sworn in as attorney general, his Department of Justice is the one agency that seems to be functioning smoothly. As it's turned out, his recusing himself from the Russia investigation has opened the political space for Sessions to concentrate on implementing the "law and order" agenda that had Trump's crowds cheering at all those campaign rallies last year. Sessions isn't wasting any time.

As The Washington Post reported on Monday, Sessions announced that prior agreements between local law enforcement agencies and the Justice Department are all under review so as to ensure that "these pacts do not work against the Trump administration’s goals of promoting officer safety and morale while fighting violent crime." Protecting he civil rights of citizens is way down the list of his concerns.

Session has long been a critic of DOJ consent decrees and is skeptical that systemic racism in law enforcement exists at all. According to The Washington Post's Sarah Posner, in a visit to St. Louis last week to speak before a police gathering, Sessions said:

Unfortunately, in recent years law enforcement as a whole has been unfairly maligned and blamed for the crime and unacceptable deeds of a few in their ranks. Amid this intense public scrutiny and criticism, morale has gone down, while the number in their ranks killed in the line of duty has gone up.

At another meeting in recent days, he told a group of police officers, “When you fight crime you have to fight it where it is, and you may have at some point an impact of a racial nature that we hate to see. But if it’s done properly it’s the right thing."

An "impact of a racial nature" is an interesting way of describing the epidemic of unarmed African-Americans being gunned down by police officers.

It's clear that Sessions' intention is to do at the Justice Department what the president has already endorsed at the Department of Homeland Security: He's going to let the police "take off the shackles." Considering Sessions' long history of racism it's entirely predictable that he would take this action, but you might have thought he would wait longer than a month just to keep up appearances.

Next up is likely to be the overhaul of the civil rights division that a group of far-right vote-suppression activists, led by Trump transition team member and Kansas Secretary of State Kris Kobach, requested in a letter sent to Sessions just last week. They see the division as rife with "ideological rot" from leftover Obama administration officials who have “jettisoned precepts like equal enforcement in favor of political and racialized dogmas.” These activists are basically arguing that Sessions must get rid of the career attorneys in the division and replace them with ideologues who believe that white people are the true victims of discrimination.

ABC News reported last month that Trump is expected to name his trusted lieutenant George Conway, husband of presidential counselor Kellyanne Conway, to head the civil rights division. He's a corporate lawyer who has little experience with civil rights issues, but he's a hard-core right-wing ideologue so these "law and order" Republicans should be pleased with the choice.

It's interesting to note that the executive branch agencies that are working efficiently to enact the president's agenda are all the police and military departments. Trump may not know what he's doing in any larger sense, but by putting two generals and a hanging judge in charge of those departments, he has insured that his authoritarian nationalist agenda is being enacted with ruthless efficiency.