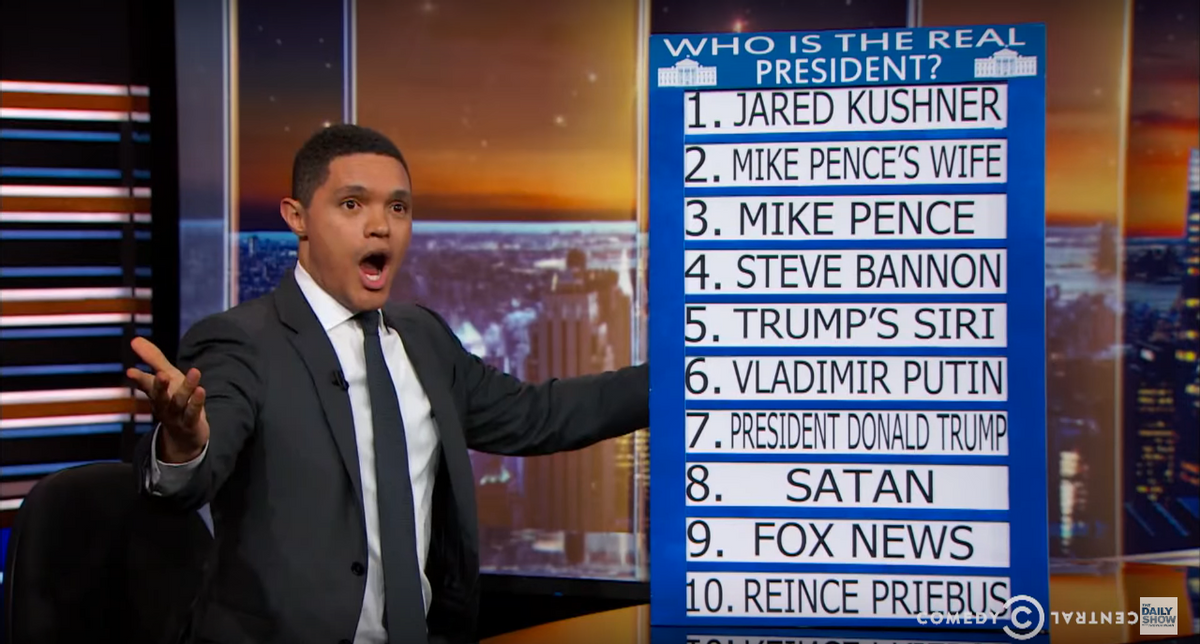 Since President Donald Trump moved to Washington, political commentators have speculated that Steve Bannon, the White House chief strategist, is the "real" commander in chief, not his boss, the "real" winner of the 2016 election. But Trevor Noah has a dark horse candidate for his shadow president: Trump's son-in-law, Jared Kushner.

On Tuesday night, the host of Comedy Central's "The Daily Show with Trevor Noah" brought out a "very scientific tracking board" that displays the presidential hierarchy in the White House. "We paid a lot of money for this," Noah quipped.

"As you can see," Noah said to his audience, "Donald Trump, despite being the official president, he has fallen down to No. 7 after spending a few days lost in the rose garden."

Bannon was only No. 4 on this week's power rankings, while Vice President Mike Pence and his wife debuted at the No. 2 and No. 3 spots respectively. The real president, at this point, according to Noah, is Kushner.

Not even 100 days into the new administration, Kushner has amassed a lot of responsibilities, including reforming the criminal justice system, running the Office of American Innovation, reforming veteran care, tackling the opioid epidemic and revamping the entire federal government.

He was also tasked to deal with ISIS.

"He has to fight ISIS? It's crazy, but, to be fair, maybe this isn't the worst idea," Noah said. "If anyone can drive ISIS crazy, it is a New York landlord."

Noah predicted that in the coming weeks an overwhelmed Kushner will inevitably run to the president to inform him of the massive mistakes he has made.

"Mr. President," Noah said, pretending to be Kushner, "I sent the black people to Iraq and I have imprisoned all of our veterans and I injected the Chinese president with opium and ISIS is coming to Mar-a-Lago."

If Kushner does somehow pull off all of these jobs, then maybe he does deserve to be president.