A moment of great danger: Trump meets Chinese president while on the brink of war in Syria

Trump hosts Xi Jinping at Mar-a-Lago, with his administration in chaos and missiles landing in Syria. It's not good 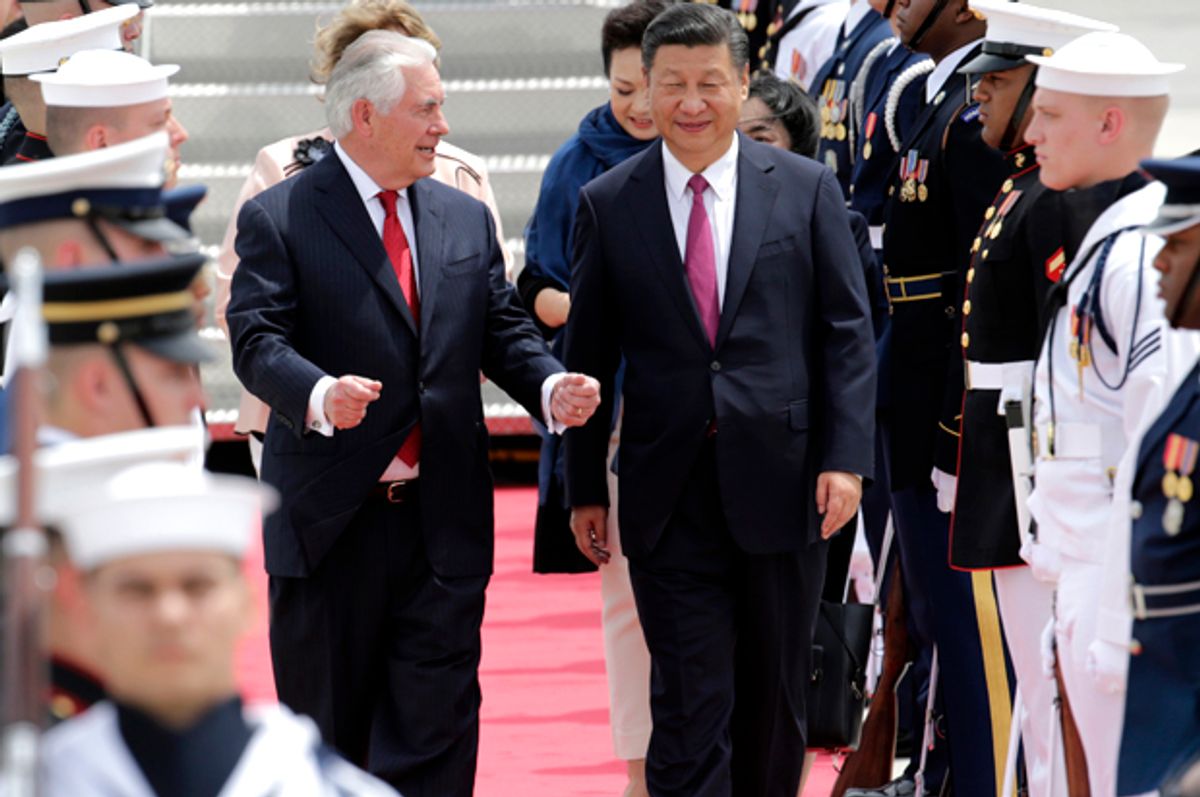 Listening to Trump ramble incoherently two days in a row about the situation in Syria and then launch airstrikes during a state dinner with the Chinese president is about as surreal a moment as we've had during his extremely surreal presidency. Listening to his unctuous sanctimony over the horror of dead Syrian babies, after he has spent the last year and a half demonizing refugees and slamming the door in their children's faces, is almost too much to bear.

There are some who think that even though it's clear Trump has no capacity for intelligible commentary on the subject, such incongruous messages are a clever way to keep foreign adversaries off balance. But it's more likely that it will encourage them to make errors in judgment. Syrian president Bashar Assad may have done just that. He may have looked at Trump's Twitter feed, his soft approach to his Russian ally and Secretary of State Rex Tillerson's and Ambassador Nikki Haley's comments last week — in which they said that opposition to Assad's human rights violations were no longer a "priority"— and concluded that he had a green light to commence chemical warfare against civilians again. After all, Trump had been openly contemptuous of people who thought Saddam Hussein should be removed from power for doing the same thing.

Those clearly coordinated comments by Tillerson and Haley were a sloppy amateur move by the Trump administration. To make matters even worse, after the missile strikes last night and Trump's lugubrious statement afterwards, Tillerson's comment that this action does not signify any change in policy toward Syria left everyone scratching their heads all over again. At this point nobody knows what's going on, other than the obvious fact that Trump's alleged moral outrage is so uncharacteristic that his sudden desire to intervene militarily in Syria must be based upon something else. He is so inconsistent that we have no idea what that is.

Chinese President Xi Jinping is at Mar-a-Lago for a state visit and one can't help but wonder if the "message" of the Syrian airstrikes (whatever it was) wasn't meant for him as much as for Assad. After all, there was no reason the U.S. had to launch airstrikes during a Chinese state visit. It could have waited a couple of days. Trump possibly wanted to show off his vaunted toughness to the Chinese delegation, and thought this would be a dramatic way to demonstrate it.

Xi is a sophisticated and knowledgeable world leader, however, and surely understands that Trump stumbled into this situation with no comprehension of how he got here. If we're lucky, seeing this naive, mercurial president in action up close may convince Xi that he is going to have to take control of the unstable situation with North Korea because the United States is no longer run by adults.

Whatever happens over the next couple of days in Florida, one thing is clear. The U.S. is at a big disadvantage when it comes to expertise and experience. Politico described the Chinese delegation as "a team of players with decades of experience in negotiating with at least three successive American presidents, and a huge playbook brimming with research and intelligence on U.S. positions on trade, security and other key issues. . . . Xi will have his secret weapon, Wang Huning, a senior adviser to three Chinese presidents and a specialist on U.S. politics who has accompanied the Chinese president on dozens of overseas trips to meet with world leaders."

Trump's administration, on the other hand, hasn't bothered to fill the jobs of the people who would usually lead such a summit — the assistant secretaries of state and defense for East Asia. Nor has it bothered to hire the U.S. trade representative's dedicated China experts. The highest-ranking adviser for China is a fellow named Matthew Pottinger, who once covered China as a reporter before joining the military and meeting Michael Flynn; the latter hired him as the senior Asia director on the National Security Council, a job normally filled by someone with deep expertise in that area.

If you listened to Trump on the campaign trail at all, you know he had a lot to say on the subject of China. Back in New Hampshire, he delivered this rambling diatribe:

[Audience member screams out “our land.”]

Our land? The way they’re going they’ll have that pretty soon. Think about it, we have rebuilt China — somebody said to me “that’s a harsh statement” — it’s the greatest theft in the history of the United States. . . . They call it a sucking action. They’re sucking the jobs and the money right out of our country.That’s what they’re doing. . . . That’s not gonna happen with Donald Trump.

Trump often said "China is raping our country" and then would praise China's leaders for being "cunning" and declare that he was the only man capable of negotiating with them. This demagogic China bashing was his most common refrain on the trail, after the "big, beautiful wall." From time to time he would slip and say Japan instead of China, which is because he said exactly the same things about the Japanese in the 1980s. He hasn't updated his complaint about the the "Asian peril" in all those years.

According to that Politico article, the only team Trump feels he needs is top lieutenant Jared Kushner, fresh from his sojourn in Iraq this week, the 93-year-old Henry Kissinger and Rex Tillerson. The secretary of state is so clueless about China that he gave away the store during his visit there two weeks ago, using language that handed China some long-desired diplomatic victories without even knowing it.

This was after Trump and Tillerson had weirdly rattled their sabers over an alleged Chinese incursion in the South China Sea (a matter that can hardly be considered of American national interest) and foolishly floundered around on the "One China" policy before finally conceding the point.

The Politico article says that Xi's goal for the summit is simple. He wants to show his people and the world that he is "recasting the U.S.- China relationship as one of two equal superpowers." Considering the monumental ineptitude of Trump and his team, there's every chance he will accomplish more than that and convince everyone that there's really only one superpower. And it isn't the United States.