WATCH: Roger Stone is hiding something when it comes to Trump's alleged collusion with Russia

The very fact that Stone ducked, dodged and deflected questions about Trump's Russian ties is quite damning 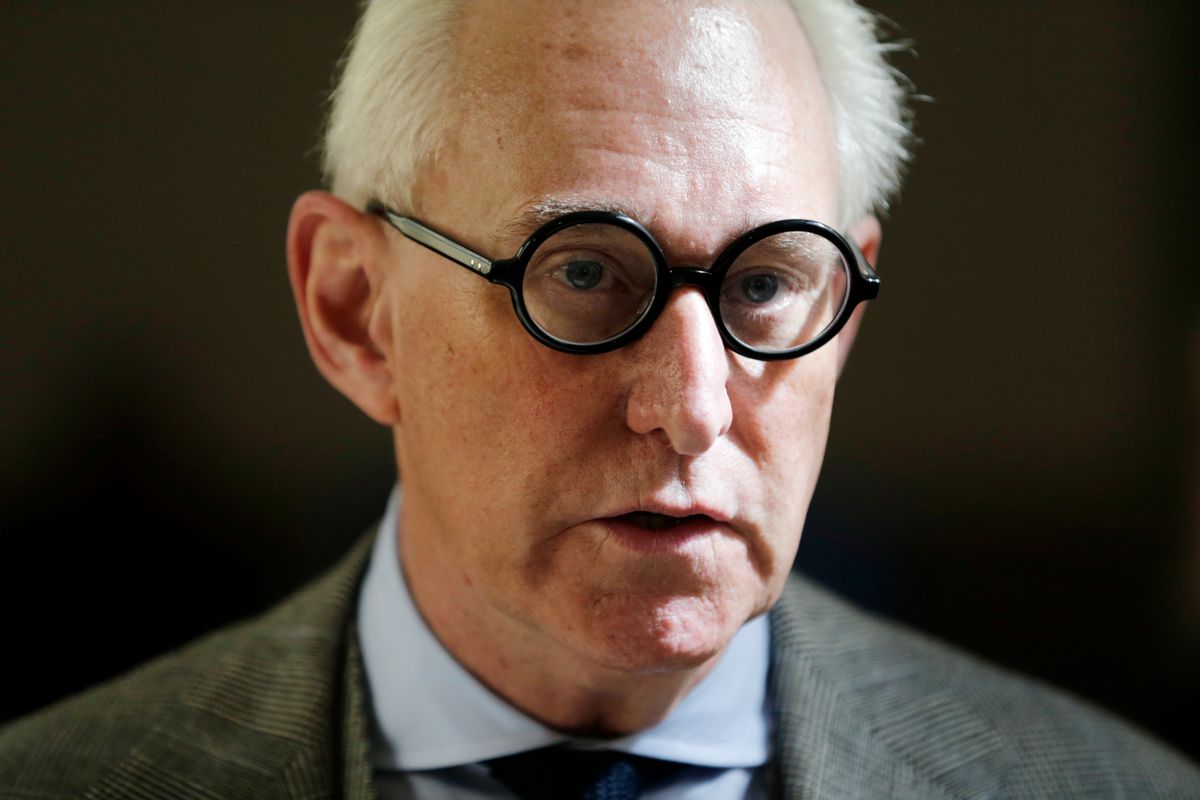 Roger Stone talks to reporters outside a courtroom in New York, Thursday, March 30, 2017. Stone, a longtime political provocateur and adviser to President Donald Trump, is being sued over a flyer sent to 150,000 New York households during the state's 2010 election that called the Libertarian Party candidate for governor, Warren Redlich, a "sexual predator." (AP Photo/Seth Wenig) (AP)
--

An overwhelmingly large circumstantial case can be made regarding President Donald Trump's connections to the Russian government. But perhaps more important, there are still countless important questions that need answers.

Roger Stone, a political aide during the Trump campaign and a decades-long friend of the president, joined Salon on Wednesday. Stone himself has been accused of having involvement in the Russian scandal, especially after his communication with notorious hacker Guccifer 2.0 surfaced. However, he has denied all collusion with Vladimir Putin and the Russian government.

During our conversation, I pushed Stone on the statements he made that suggested he did, in fact, have a relationship with Russia. He made one such statement after suffering a hit-and-run accident. "You could make the case that the Russians want to off me because they do not want me to testify because it would show their hand," Stone said at the time.

In many ways, Stone's offhand remark is characteristic of how he generally handles information. It was the nugget of a provocative thought — perhaps an unintentional slip into truth — that he immediately followed with the type of partisan red meat he has specialized in for longer than I have been alive. In this case, he said: "It is more likely that someone would like it to look like the Russians tried to bump me off."

During our interview, I also drew a comparison between the allegations surrounding Trump and evidence that recently emerged about Richard Nixon — another politician Stone has close ties to.

During the 1968 presidential election, Nixon worked to throw a "monkey wrench" into Lyndon B. Johnson's ongoing peace talks that could have ended the Vietnam War. Stone refused to answer any of these questions and became increasingly angry when pressed on the subject.

Stone attempted to deflect by arguing that Trump's recent airstrike on Syria undercuts the notion that he could have colluded with Russia. I pointed out that, if two parties engage in criminal conspiracy, subsequent betrayal doesn't matter. Both parties are still equally culpable in their initial criminal activities.

While there is no smoking gun proving that the Russian government helped Trump defeat Hillary Clinton in the 2016 election, there is more than enough circumstantial evidence to warrant a thorough and honest investigation. There are also reasons to doubt that neither Rep. Devin Nunes nor the Republicans now leading the investigation in the House Intelligence Committee have any genuine interest in justice.

Even worse, Trump has been remarkably effective at shifting the public's attention from this controversy to his never-ending list of ridiculous claims, such as when he accused former President Barack Obama of wiretapping Trump Tower.

The American people deserve answers. Although Stone failed to provide any substantial response during our conversation, the very fact that he ducked, dodged and deflected is quite damning.

Stone is a political operative with half a century of experience — one who openly adores the only president in American history who ever had to resign in disgrace. My interview with him makes it clear that he knows more than he is letting on. While we may never find out the truth from him, we need to learn it from someone.